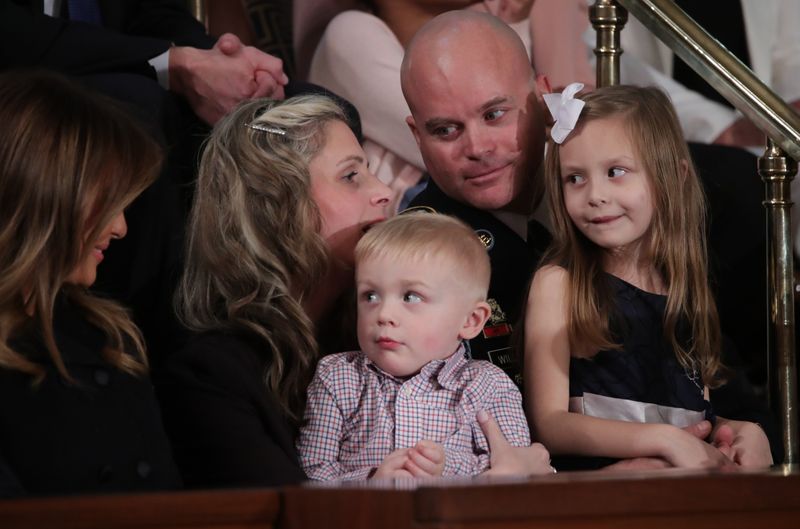 WASHINGTON (Reuters) - U.S. President Donald Trump displayed reality TV flair on Tuesday to underscore his pledge to wind down the war in Afghanistan, engineering the return of an Army sergeant who surprised his wife and two young children in the House of Representatives as a national broadcast audience looked on.

"We are working to finally end America's longest war and bring our troops back home!" Trump said in his annual State of the Union speech to Congress, prompting applause from both Democrats and his fellow Republicans.

But the applause would grow louder, and longer, in one of the few nonpartisan moments of Trump's 80-minute speech.

Trump described Williams as working full-time while raising her children and volunteering to help other military families. She has done that on her own, he said, for the past seven months while Sergeant First Class Townsend Williams was in Afghanistan, his fourth deployment in the region.

"But Amy, there is one more thing. Tonight we have a very special surprise," the former reality television host said in a departure from his prepared remarks.

"I am thrilled to inform you that your husband is back from deployment. He is here with us tonight, and we couldn't keep him waiting any longer," Trump called out.

Amy Williams put her hands to her face and seemed to sob.

The sergeant, in his dress uniform, walked down the aisle and embraced his family, before shaking Melania Trump's hand and waving to approving roars from the members of Congress, officials and guests in the House chamber.

Trump, who campaigned on a promise to wind down America's "endless wars," was reported last year to be planning to withdraw about half of the 14,000 U.S. forces in Afghanistan, adding pressure to secure a peace agreement with the Taliban.

But the president called off the talks to end the 18-year-long war in September after an attack killed a U.S. soldier. The talks resumed but were interrupted again in December after a suicide attack on a U.S. base outside Kabul killed two civilians.

Trump used another guest to bring a new focus to foreign policy, Juan Guaido, the leader of Venezuela's National Assembly who is recognized by the United States and most European and Latin American countries as Venezuela's rightful head of state.

The Trump administration has been working for more than a year to ratchet up sanctions and diplomatic pressure on Venezuela in the hope of ousting socialist President Nicolas Maduro.

Trump's push on Venezuela has been popular among Cuban Americans in Florida, a key voting bloc in a state seen as central to Trump's re-election hopes.

Trump also reiterated his call to Iran to abandon its pursuit of nuclear weapons and stop "spreading terror," saying Washington was here to help the Islamic Republic rebuild its economy if it would do so. Iran has said its nuclear program is for peaceful purposes.

Trump in 2018 pulled the United States out of the 2015 Iran nuclear deal reached by former Democratic President Barack Obama, reimposing sanctions. He has since pursued a "maximum pressure" campaign against Tehran and ordered a drone strike last month that killed top Iranian general Qassem Soleimani. The strike briefly raised fears of a U.S.-Iran war.

"Our message to the terrorists is clear: You will never escape American justice. You attack our citizens, you forfeit your life!" Trump said in his speech.