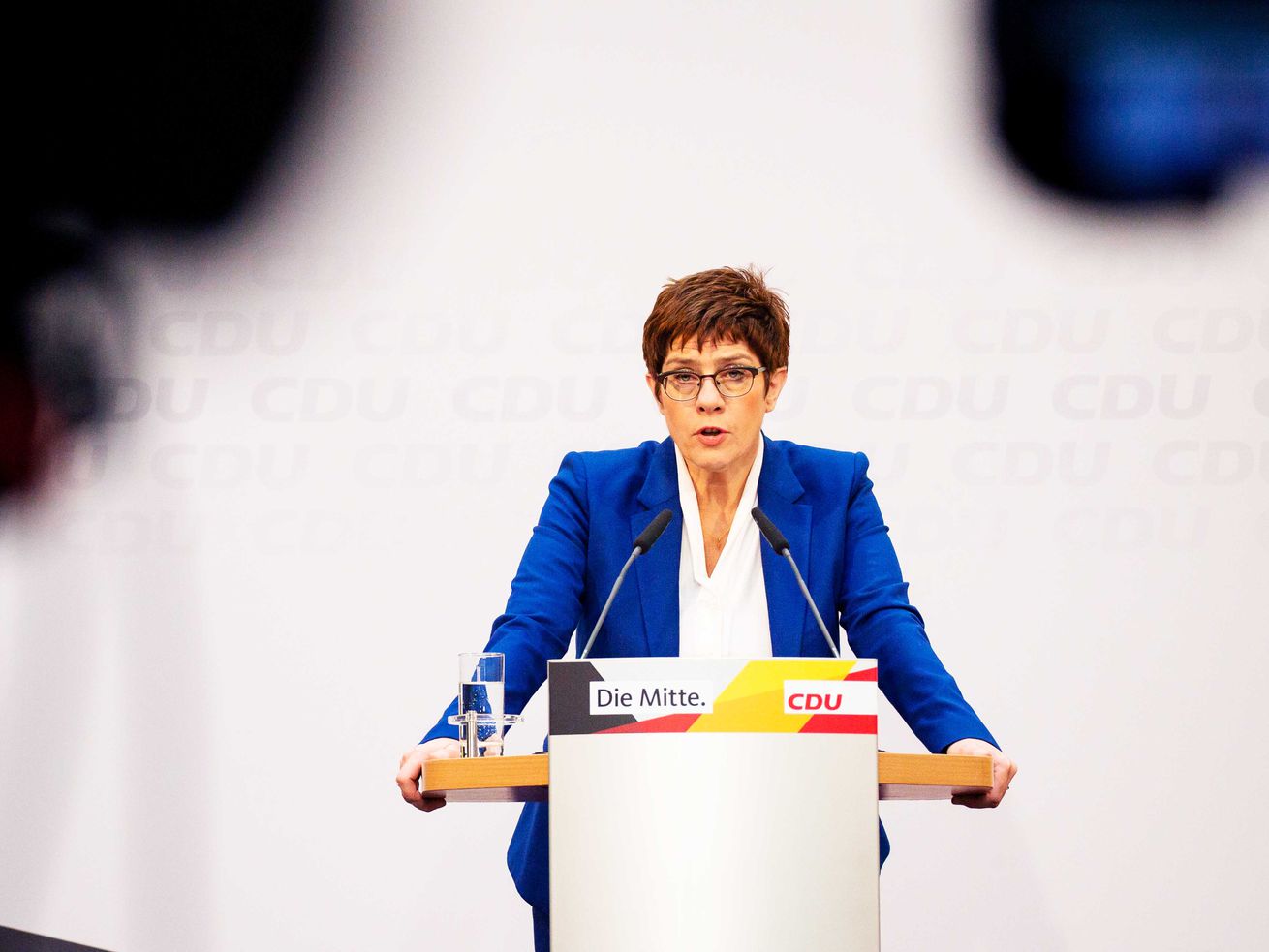 Annegret Kramp-Karrenbauer, the minister of defense, took over as leader of the Christian Democratic Union (CDU) in late 2018. She was widely seen as Merkel’s preferred candidate, and potentially next-in-line to become chancellor when Germany votes in federal elections in 2021.

Kramp-Karrenbauer (also known as AKK) said Monday she would step down as CDU leader after a controversial election in the German state of Thuringia last week. There, the center-right CDU voted with the far-right, anti-immigrant, anti-Islam Alternative for Deutschland (AfD) to install a member of the smaller, pro-business Free Democrats as state premier.

The move shunted aside the more popular left-wing leader. But even more significantly, it defied a ban on the CDU working with the growing far-right faction.

The CDU’s decision to join forces with the AfD in Thuringia wasn’t just verboten — it revealed the cracks within the CDU under AKK’s leadership and her weakened control over the party. It also foreshadows an uncertain future for the party and Germany after Merkel leaves power next year.

Germany’s politics have become more and more fragmented, with groups on both the right (AfD) and the left (the Greens) challenging the traditional establishment parties — the center-right CDU and the center-left Social Democrats (SPD) — and their two-party dominance. This has complicated governance, especially on the state and local levels.

The Thuringia election illuminated this crisis as it pushed Merkel’s CDU to cross the once-unimagined prospect of having to cooperate with the far-right AfD to bolster its political power.

“A lot of political commentators have said the ‘dam has been breached, this is a turning point, we should never cooperate with the AfD,’” Sudha David-Wilp, a senior transatlantic fellow at the German Marshall Fund, told me. “But they are faced with reality, on the conservative side of the aisle, that nearly a quarter of the voters in Thuringia and some other states, like Brandenburg, have voted for the AfD in state elections.”

Though the state premier in Thuringia, Thomas Kemmerich, has since resigned, it has sparked a national political crisis.

Merkel, who was on a state visit in South Africa at the time of the election, also condemned the alliance, calling it “unforgivable” and “a singular process that broke with a fundamental conviction of mine and my party’s, namely that you don’t win majorities with the help of Alternative für Deutschland.”

AKK will take the fall for Thuringia, but Germany’s post-Merkel future is uncertain

Merkel has served as leader of the CDU for nearly two decades; she came to power as Germany’s chancellor in 2005. She is, as Vox has previously written, a “boringly stable leader.” In more than a decade in power, Merkel helped make Germany a powerful force within the European Union and effectively managed one of the strongest economies in Europe even as the continent weathered an economic crisis.

Her biggest challenge came around 2015, where Merkel welcomed about 1 million refugees from Syria and the Middle East to Germany. The political crisis in Germany today stems, in part, to backlash from this policy. But, at the same time, Merkel weathered the political pushback and was seen by many as a champion of human rights and democracy in an increasingly volatile world.

But as her party started to struggle in elections, Merkel stepped down as leader of the CDU in 2018, saying that though she would remain in power as chancellor she would not seek reelection in 2021. Kramp-Karrenbauer, a Merkel ally, won a close leadership contest, and many saw her as Merkel’s preferred choice to carry on her centrist legacy and stable leadership within Europe.

But AKK’s 14-month tenure, which began in December 2018, has not been smooth. She has not yet quite emerged from Merkel’s shadow, David-Wilp told me. “Mini-Merkel,” as she is known, has also proven to be a bit more conservative than her predecessor, particularly on social issues like gay marriage, and has made some high-profile gaffes. Meanwhile, bereft of a dominant leader, the CDU has struggled in state elections, which is usually a bad omen for any party.

When the CDU in Thuringia defied Kramp-Karrenbauer and voted with the AfD to install a state premier, it showed the shortcomings of her leadership and proved she did not have full control over the party on such a significant issue.

“The AfD stands against everything that we in the CDU stand for,” AKK said as she announced her plans to step down. “Any form of rapprochement with the AfD weakens the CDU.”

Merkel is likely to play some role in choosing AKK’s successor, but divisions are already emerging between more traditionally conservative CDU leaders and those more closely mirroring Merkel’s centrism.

But the whole Thuringia affair points to a more serious problem that won’t go away with the departure of AKK. The AfD has surged in recent years and is now the largest opposition party in Germany’s Bundestag (the CDU and the center-left SPD are in a grand coalition). It is also represented in every state legislature in Germany.

Germany’s politics are in a state of upheaval

The AfD spun off as a protest party in 2013, mainly in response to the eurozone economic crisis. But the party began to embrace a more anti-immigrant, far-right platform in the wake of Merkel’s refugee policies. It has capitalized on those fears to become a serious political force.

At least some of the AfD’s support comes from conservative voters who’ve abandoned the mainstream parties, and the CDU hasn’t quite figured out how to deal with this or how to stop AfD’s momentum. Especially on the local level, as Thuringia’s election showed, some CDU members seem open to working with the AfD, both as a way to stay in power and to figure out how to actually get stuff done in Germany’s increasingly fragmented political landscape.

Attempting to bring the far-right into the mainstream has failed in places like Austria, but Germany’s history makes this political gambit even more sensitive. What has complicated this even more is the phenomenal rise of the Greens, a left-wing party that’s pro-immigrant, pro-Europe, and pro-environment. The party had a historic victory in the European elections in 2019, coming in second in Germany, and it’s currently challenging Merkel’s CDU for dominance.

The popularity of the Greens, alongside the growth of the AfD, highlights the hollowing out of the center that’s happening not just in Germany but across Europe. Voters are rejecting the traditional center-left and center-right establishment parties. This splintering is happening in Italy, in Spain, and in Ireland, which just saw the radical, left-wing Sinn Fein achieve a historic result.

This makes the inevitable departure of Merkel all the more worrying. The German chancellor for a decade was a steadying hand across Europe; after Trump’s election in the US, she was cast into the role of defender of liberal democracy.

Merkel’s impending exit comes as Europe prepares for an uncertain time. The European Union is set to begin tough negotiations with the United Kingdom over its post-Brexit relationship. The US and the EU are on the verge of a potential trade war, and the potential reelection of Donald Trump could put even more strain on NATO and traditional Western alliances. Germany’s own political chaos could make all of this much more complicated.