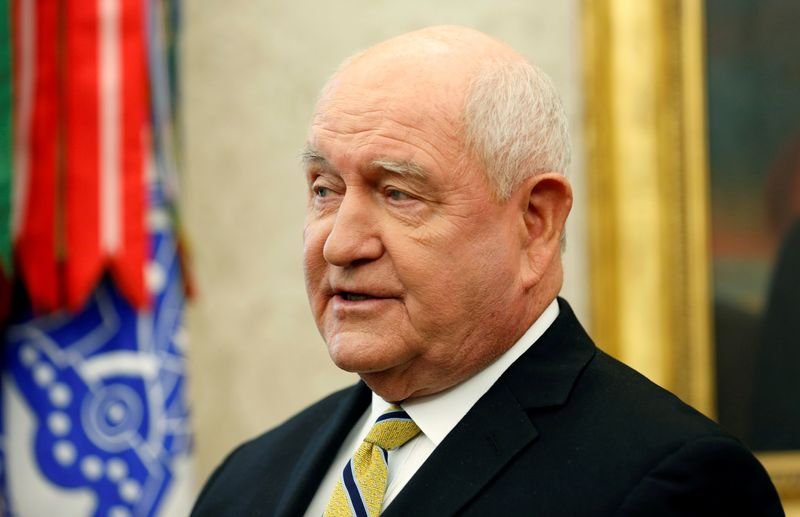 © Reuters. FILE PHOTO: U.S. Secretary of Agriculture Sonny Perdue speaks during an event in the Oval Office of the White House in Washington

By Richard Webner and Tom Polansek

SAN ANTONIO, Texas/CHICAGO (Reuters) - U.S. Agriculture Secretary Sonny Perdue said on Wednesday that the United States would have to be tolerant if the fast-spreading coronavirus impaired China's ability to increase purchases of American farm products under the countries' recently signed trade deal.

Commodity traders and agricultural economists have questioned whether Beijing will follow through on pledges in the deal to buy $36.5 billion of U.S. agricultural goods in 2020, now that the new coronavirus is threatening China's economic growth.

"If they're really trying and it really just blows the economy out of the water, then we would have to be understanding of that," Perdue said, speaking to reporters at a cattle convention in Texas.

Perdue noted he is not part of the government team tasked with enforcing the terms of the deal. He did not say how the United States would need to adjust its expectations.

The United States wants China to live up to its pledges, Perdue said, but trade negotiators could not have anticipated the outbreak.

"There are force majeure type of things ... that I think you have to be sensitive to," Perdue said.

The deal text contains a disaster clause, yet to be formally invoked by Beijing, to allow for delays: "In the event that a natural disaster or other unforeseeable event outside the control of the Parties delays a Party from timely complying with its obligations under this Agreement, the Parties shall consult with each other."

China has reported that more than 500 people have died in the outbreak, most in and around the locked-down central city of Wuhan, where the new virus emerged late last year.

China's ability to meet its purchase target was in doubt even before coronavirus outbreak, because rival soybean supplier Brazil is harvesting a massive crop, and a deadly pig disease is reducing Chinese demand for soy used to feed livestock.

"If you will, the coronavirus has given China a get-out-of-jail card on their obligations," said Bill Lapp, economist and president of Nebraska-based Advanced Economic Solutions.

White House economic adviser Larry Kudlow said on Tuesday the epidemic would delay a surge in U.S. exports to China expected from the trade deal.