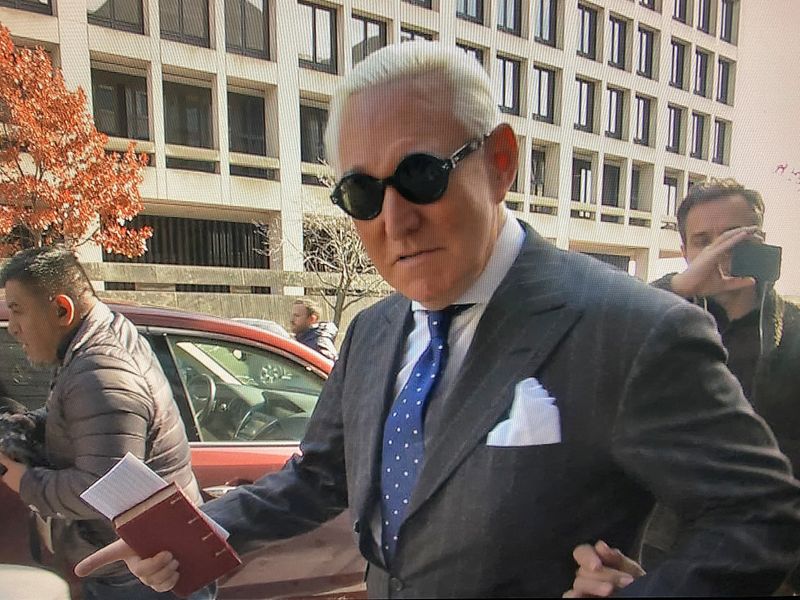 WASHINGTON (Reuters) - The U.S. Department of Justice will seek a shorter prison sentence for Roger Stone, a convicted associate of President Donald Trump, hours after Trump tweeted that prosecutors were treating him unfairly, media outlets reported on Tuesday.

Trump called out prosecutors involved in the case after they proposed a sentence of 7 to 9 years for Stone, a longtime political adviser and self-proclaimed "dirty trickster," who was convicted of charges stemming from an investigation into Russian interference in the 2016 U.S. presidential election.

"This is a horrible and very unfair situation. The real crimes were on the other side, as nothing happens to them. Cannot allow this miscarriage of justice!" Trump tweeted early on Tuesday morning.

U.S. prosecutors, in a court filing on Monday, said their proposed sentence fell within guidelines and would "accurately reflect the seriousness of his crimes and promote respect for the law."

Stone faces a Feb. 20 sentencing after a jury found him guilty of seven counts of lying to Congress, obstruction and witness tampering.

Fox News, citing an unnamed senior Justice Department official, said the decision to scale back the requested sentence was made before Trump's tweet and that top department officials had been shocked by prosecutors' recommendation.

The Washington Post, NBC and Bloomberg also reported the move to seek a lighter sentence, although it was not immediately clear when any such filing would be made in the case being handled by U.S. District Court Judge Amy Berman Jackson.

"We look forward to reviewing the government’s supplemental filing," Stone's lawyer, Grant Smith, said in an email to Reuters.

Representatives for the Justice Department did not immediately respond to a request for comment on the media reports.

Stone is one of several Trump associates charged with crimes as part of U.S. Special Counsel Robert Mueller's Russia probe, which Trump has long decried as a "witch hunt."

Legal experts said it would be unusual for prosecutors to reduce their sentencing recommendations in a case like this one.

"You don’t want to be changing minds mid-stream. The office doesn’t look good in that regard," said Channing Phillips, a former U.S. Attorney under Democratic President Barack Obama.

David Weinstein, a former federal prosecutor, said the government sometimes reduces its proposed sentence for cooperative defendants, but not for defiant ones like Stone. However, he said he thought the proposed sentence "seems a little heavy handed."

Last July, the Justice Department switched course on efforts to add a controversial citizenship question to the 2020 U.S. Census after Trump tweeted he would push hard to allow it even after the Supreme Court rejected it. The Justice Department had initially accepted the court ruling.