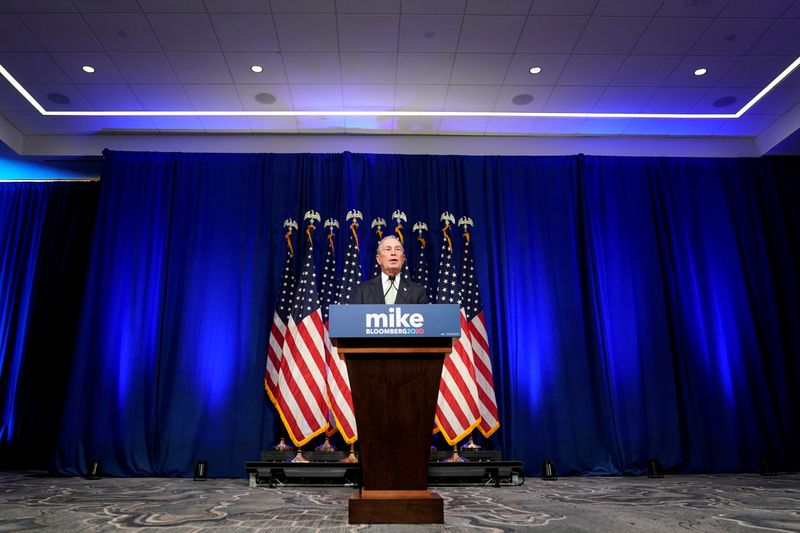 By Joseph Ax and Michelle Price

The left-leaning platform marks a striking turnaround for the former Republican New York mayor who made his $60 billion fortune in financial services and who in the past has criticized reforms introduced following the 2007-2009 financial crisis.

Among the most eye-catching proposals is a tax of 0.1% on transactions in stocks, bonds and payments on derivative contracts, bolstering the "Volcker Rule" ban on proprietary trading, and setting a trading speed limit - all of which take aim at Wall Street clients of Bloomberg Inc's trading terminal.

Bloomberg also on Tuesday waded into the long-running debate on the future of housing finance giants Fannie Mae and Freddie Mac, which were bailed out during the crisis, proposing to merge them to ensure taxpayers are fully compensated for the risks

While Bloomberg's platform does not go as far as proposals backed by progressive rival presidential candidates Elizabeth Warren and Bernie Sanders, who have called for big banks to be broken up, it underscores how far the Democratic Party is moving to the left on financial and corporate policy issues.

Bloomberg, a latecomer to the race who has so far spent $188 million of his own money on the campaign, will step onto the Democratic debate stage for the first time on Wednesday after meeting the 19% polling threshold set by the Democratic Party.

"Our sense is that these proposals are primarily intended to blunt progressive attacks, especially with Bloomberg joining the debate stage for the first time on Wednesday evening," said Isaac Boltansky, director of policy research at Washington-based Compass Point Research & Trading, in a note.

"But the overarching tone of the proposals underscores the populist shift in the Democratic party and the heightened potential for significant policy shifts."

Bloomberg has previously proposed major tax hikes on the wealthy, including a higher capital gains rate and a new 5% surtax on annual incomes that exceed $5 million.

Touching on a key theme of Warren and Sanders, Bloomberg also proposes measures to boost Americans' access to the financial system by offering a range of banking services through the U.S. Postal Service and piloting free bank accounts.

Adopting another familiar Democratic idea, Bloomberg proposes a new "corporate crime" team at the U.S. Department of Justice that would be discouraged from using non-prosecution agreements, which impose fines without criminal charges.

The proposals, in particular a transaction tax, are likely to spark strong pushback from the financial lobby, which is already fighting aggressively to rebut the idea, which was rejected by the Obama administration but has gained traction in Democratic circles in recent years.

Under Bloomberg's plan, the tax would be phased in gradually, starting at 0.02%, to "minimize any unintended consequences."

"At a time when market development, efficiency and competition are driving the cost of investing toward zero, it makes little sense to increase the cost through what is essentially a sales tax. Further, the threat such a tax poses to the efficiency of the U.S. capital markets is real. It begs the question, what’s the point?”"