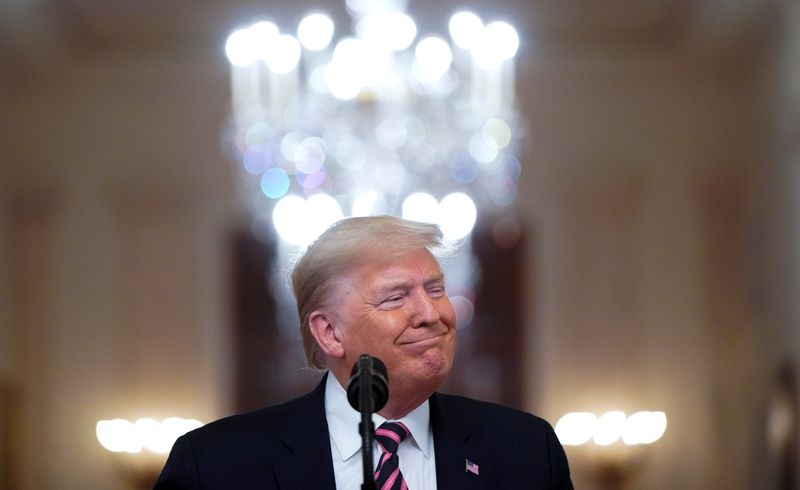 Reversing a lower court judge, the U.S. Court of Appeals for the District of Columbia Circuit said a group of more than 200 Democratic lawmakers lacked legal "standing" to bring the case in the first place.

The three-judge panel said it was bound by U.S. Supreme Court decisions that have limited the ability of individual members of Congress to litigate questions that affect the legislative branch as a whole.

The Democratic lawmakers "can, and likely will, continue to use their weighty voices to make their case to the American people, their colleagues in the Congress and the President himself, all of whom are free to engage that argument as they see fit," the three-judge panel wrote. "But we will not—indeed we cannot—participate in this debate."

“We're disappointed in the panel's decision and are considering next steps," said Elizabeth Wydra, a lawyer who argued on behalf of the lawmakers.

A spokeswoman for the U.S. Department of Justice, which argued the case for Trump, did not immediately respond to a request for comment.

The lawsuit was brought in 2017 by congressional Democrats including Senator Richard Blumenthal of Connecticut. It is one of a trio of cases against Trump over the rarely tested emoluments clauses, which prohibit presidents from taking gifts or payments from foreign and state governments.

One or more of the cases could end at the U.S. Supreme Court, legal experts said.

The emoluments cases have largely centered on the Trump International Hotel, just blocks from the White House, which the Republican president opened shortly before he was elected in November 2016.

Unlike past presidents, Trump has retained ownership of numerous business interests, including the hotel, while serving as president.

Since Trump's election, the hotel has become a favored lodging and event space for some foreign and state officials visiting the U.S. capital.

The lawsuits alleged that, in failing to disengage from the hotel, Trump has made himself vulnerable to inducements by foreign governments seeking to curry favor.