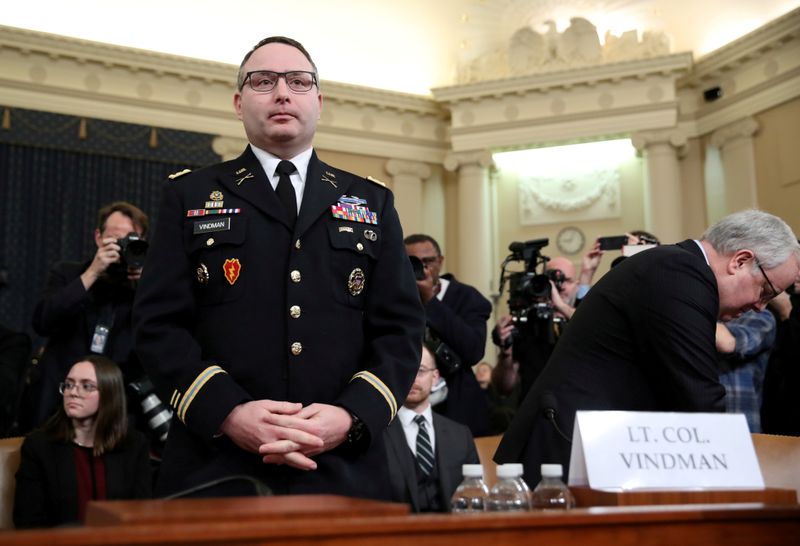 Two days after Trump was acquitted by the Republican-controlled Senate on charges of trying to pressure Ukraine to investigate a political rival, Vindman -- the top Ukraine expert at the White House's National Security Council -- was escorted out of the building, according to his lawyer.

"Vindman was asked to leave for telling the truth," said his lawyer, David Pressman.

Hours later, Sondland said he had been fired from his post as U.S ambassador to the European Union.

Vindman's twin brother Yevgeny, who worked as a lawyer at the NSC, also was escorted out of the White House, according to Michael Volkov, who represented Vindman when he testified in the impeachment inquiry.

Trump has said he is still upset with Democrats and government officials involved in the impeachment investigation, even after he was acquitted on Wednesday.

Vindman, a decorated combat veteran, testified in November that he "couldn't believe what I was hearing" when he listened in on a July 25 phone call between Trump and Ukrainian President Volodimir Zelenskiy that became the focus of the inquiry.

Trump asked Zelenskiy to launch investigations into both Democratic rival Joe Biden and a discredited theory that Ukraine, not Russia, colluded with Democrats to harm Trump in the 2016 U.S. presidential election.

Sondland, a wealthy Republican donor and Oregon hotelier who served as U.S. Ambassador to the European Union, testified that he was following Trump's orders when he pushed Ukrainian officials to carry out investigations sought by the president.

"I am grateful to President Trump for having given me the opportunity to serve," he said.

The White House and State Department did not immediately respond to requests for comment on Sondland's removal.

"This is as clear a case of retribution as I've seen during my 27 years in the Senate," said Democratic Senator Dianne Feinstein.

Biden's campaign for the Democratic presidential nomination suffered a serious setback when he came in fourth place at the Democrats' first state contest in Iowa this week.

Vindman's two-year stint at the White House had been due to end in July. An Army spokesperson said both brothers had been reassigned to the Army, but declined to give further information "out of respect for their privacy."

Another senior White House aide who testified over impeachment, Jennifer Williams (NYSE:WMB), left this week for a post at the U.S. military's Central Command, according to Bloomberg News.

Vindman downplayed concerns that he would suffer payback for speaking out when he testified to Congress. "I will be fine for telling the truth," he said.