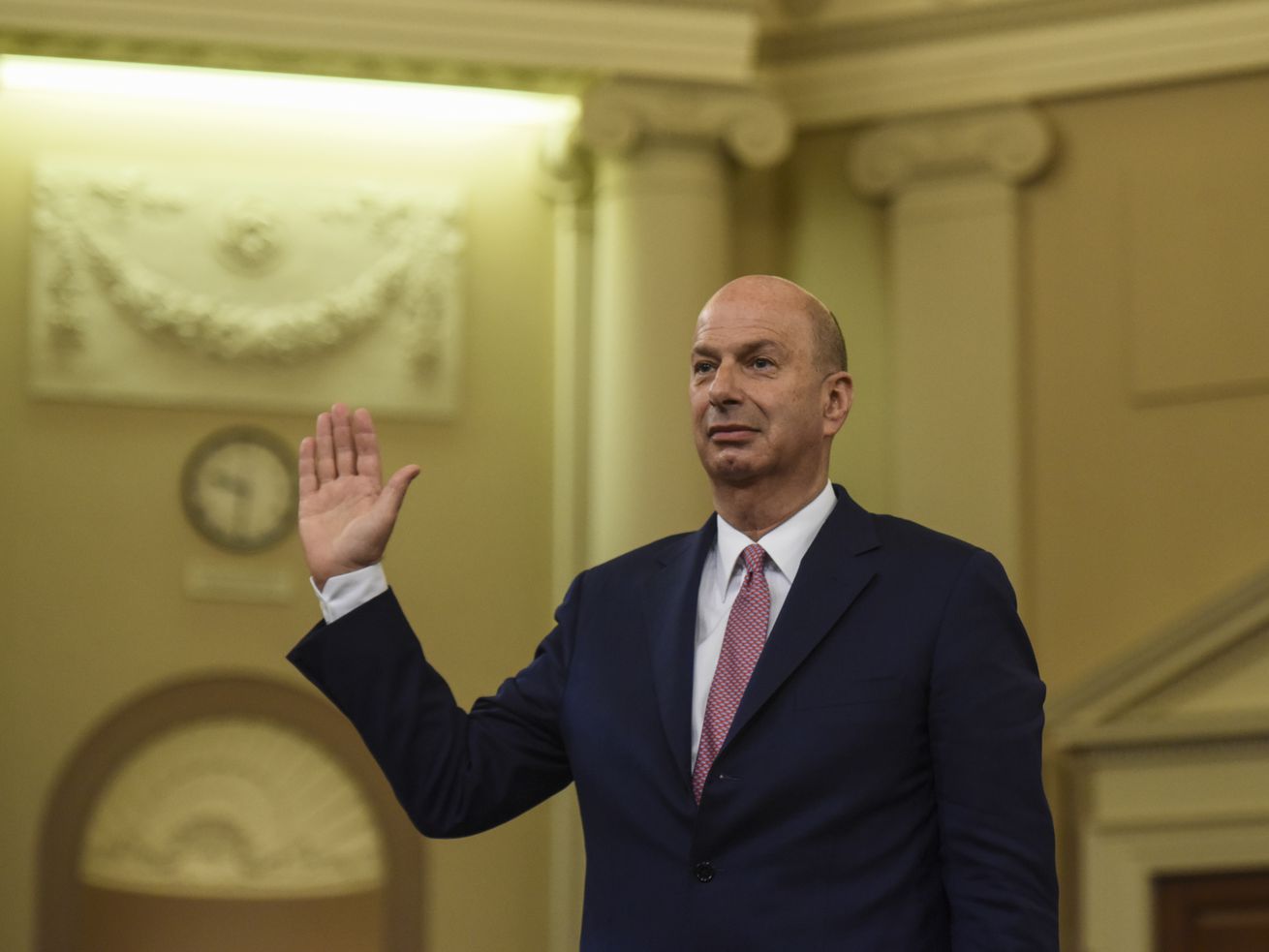 Gordon Sondland, the now-ousted US ambassador to the European Union, is sworn in before testifying before the House Intelligence Committee at the Longworth House Office Building on Wednesday, November 20, 2019, in Washington, DC. | Jahi Chikwendiu/The Washington Post via Getty Images

This is part of Trump’s post-acquittal purge.

President Donald Trump is continuing his retribution campaign against administration officials who testified in the impeachment inquiry, this time firing his handpicked ambassador to the European Union, Gordon Sondland.

The dismissal, which came just hours after he pushed out Lt. Col. Alexander Vindman and his brother from the National Security Council, makes it clear that the president feels few restraints after the Senate acquitted him earlier this week.

Sondland, who’d been a major Trump donor before getting the ambassador job, played a critical part in the Ukraine scandal. Alongside the president’s personal lawyer Rudy Giuliani, Sondland pressured officials in Kyiv to announce an investigation into former Vice President Joe Biden and his son, Hunter.

That’s precisely why House Democrats wanted to hear from him during the impeachment inquiry last November — and his performance turned him into one of the most dangerous witnesses for the president.

“I know that members of this committee have frequently framed these complicated issues in the form of a simple question: Was there a ‘quid pro quo?’” he said in his opening statement. “The answer is yes.”

Sondland’s testimony also made it clear that the scheme to pressure Ukraine was not some rogue operation masterminded by Giuliani alone. The ambassador provided extensive documentation, including emails and text messages, showing that his own personal efforts in service of arranging the quid pro quo were authorized at the highest levels of the administration. On that point, Sondland did not mince his words:

Which means that even though Sondland was a Trump ally from the start, the act of telling the truth in front of Congress drew Trump’s ire — and has now resulted in his ouster.

He seems to be taking it fairly well, though. “I was advised today that the president intends to recall me effective immediately as United States Ambassador to the European Union,” the ambassador said in a statement Friday evening, adding that he appreciated Trump “for having given me the opportunity to serve.”

The question now is whether Trump will continue to clean house, perhaps by pressuring Secretary of State Mike Pompeo to push out George Kent — one of the diplomatic corps’ top Ukraine experts who testified in the House impeachment investigation — or getting Defense Secretary Mark Esper to kick out Laura Cooper, the Defense Department’s deputy assistant secretary for Russia, Ukraine, and Eurasia, who told investigators the White House directed the freeze on military aid to Kyiv.

Some of the key witnesses, like top US diplomats to Ukraine Bill Taylor and Marie Yovanovitch, have already left government. At this rate, anyone speaking truth to power may soon feel they need to leave or be purged. This is the real American carnage of the Trump era.