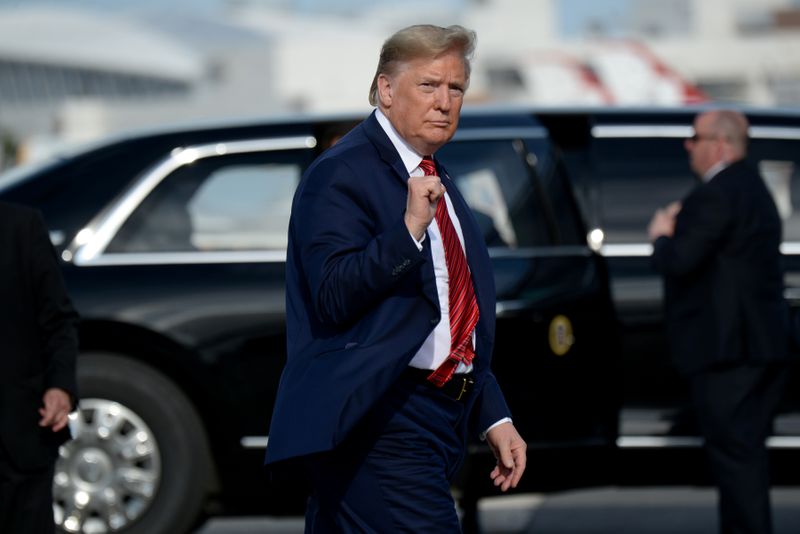 WASHINGTON (Reuters) - U.S. President Donald Trump on Tuesday called for all cases stemming from Special Counsel Robert Mueller's investigation into Russian interference in the 2016 election to be "thrown out" and suggested he could bring a lawsuit over the matter.

Trump made the comments hours before a telephone conference call between lawyers for the president's former adviser, Roger Stone and prosecutors. Stone was convicted on seven counts of lying to the U.S. Congress, obstruction and witness tampering.

Prosecutors initially called for Stone to receive a prison sentence of between seven to nine years in the case but, after Trump publicly called the recommendation "unfair," the Justice Department scaled it back. That sent shock waves through Washington and prompted all four prosecutors to quit the case and one to quit the agency.

"Everything having to do with this fraudulent investigation is ... badly tainted and, in my opinion, should be thrown out," Trump said in a series of tweets.

"If I wasn't President, I'd be suing everyone all over the place ... BUT MAYBE I STILL WILL," Trump continued.

Asked about Trump's tweets on Tuesday in an interview with Fox News Channel, White House spokeswoman Stephanie Grisham alleged corruption and raised questions about the jury, adding: "He's frustrated, obviously, and who knows what he'll end up doing."

Stone was one of several former Trump associates to have been charged in the Mueller probe and one of only two to go to trial instead of pleading guilty.

In a letter on Monday, more than two thousand former Justice Department officials criticized the behavior by Barr and Trump around the Roger Stone case and said their actions "require Mr. Barr to resign."