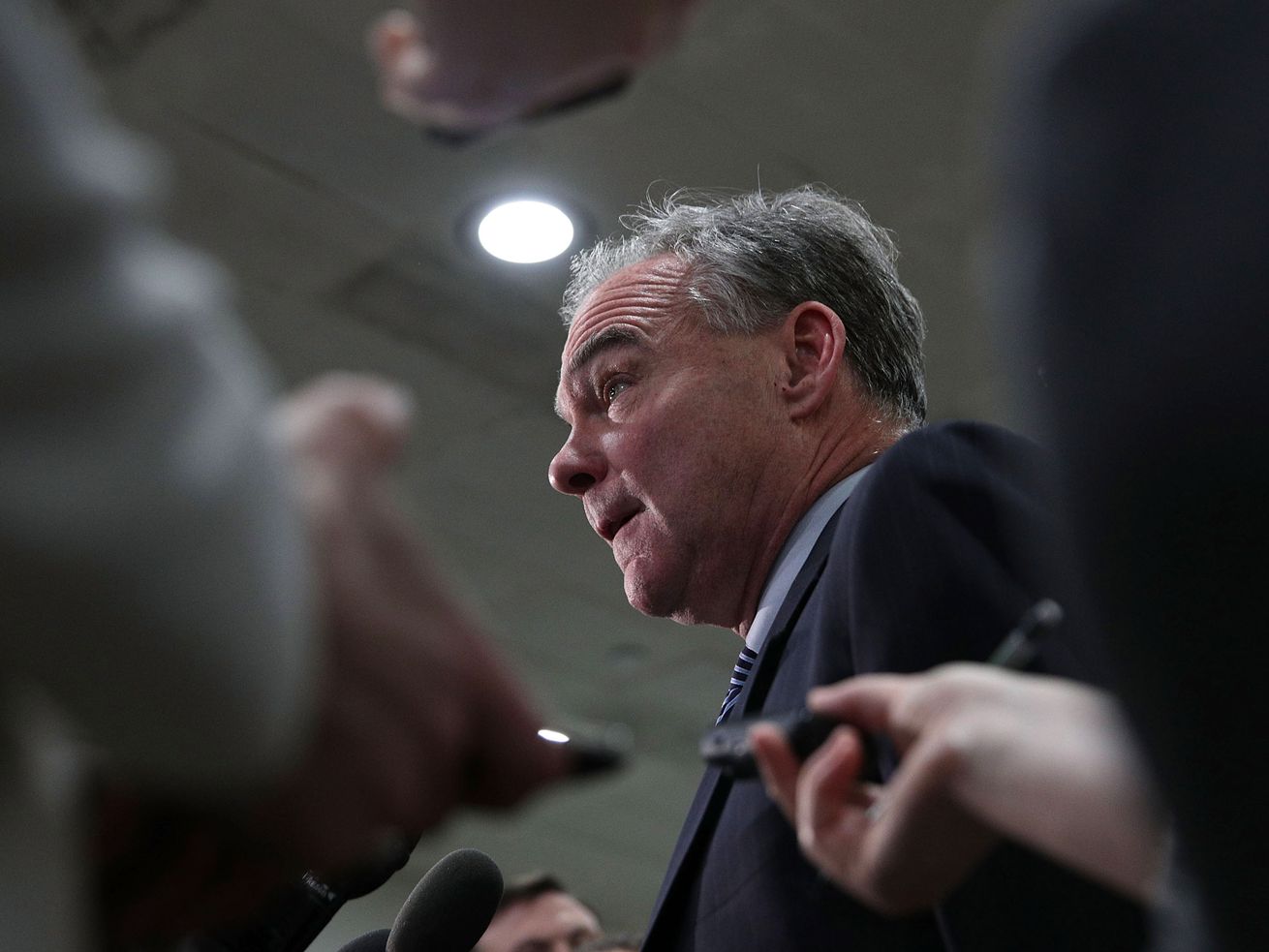 Sen. Tim Kaine (D-VA) talks to members of the media as he leaves after a closed briefing on the airstrikes against Syria by Chairman of the Joint Chiefs Gen. Joe Dunford on April 7, 2017, at the Capitol in Washington, DC. | Alex Wong/Getty Images

Eight Republicans joined with Democrats to send the president a message.

The Senate, on Thursday, once again attempted to limit the president’s war powers.

In a 55-45 vote, lawmakers passed a resolution that would require President Donald Trump to obtain congressional approval if he wanted to take additional military action against Iran. It’s the latest lawmaker response to an airstrike Trump authorized in early January that killed Iranian Gen. Qassem Soleimani, and follows the passage of a similar measure in the House. Unlike the House resolution, however, Kaine’s measure has the power to become law if it were enacted. That difference means it would need to be voted on by the lower chamber before it heads to the president’s desk.

Even if this resolution is passed by both chambers of Congress, it’s expected to be rejected by the president, who was calling via Twitter for Republicans to vote it down earlier this week. “If my hands were tied, Iran would have a field day,” Trump wrote.

The Thursday Senate vote marks the latest attempt to check the president’s war powers, which have evolved significantly, in part with the help of past congressional authorizations. Last year, both the House and Senate also voted to curb the president’s ability to continue the United States’ support for the war in Yemen, though those measures were similarly vetoed. Democratic lawmakers have also pushed to include amendments in the annual must-pass defense budget bill that would have reined in the president’s ability to unilaterally take military action in Iran, but those were stripped out of the final versions.

Although it’s ultimately just a message, the passage of this Senate resolution enables Democrats to make a point and put Republicans on the record. It also further establishes where Congress stands on the matter — and signals to Trump just how seriously lawmakers on both sides of the aisle are taking it.

In the past year, Congress has tried repeatedly to check Trump’s ability to take military action, efforts that have included support from some Republicans. Although Congress hasn’t waded into specific questions tied to the conflicts in Afghanistan and Iraq, there has been a growing push to prevent the president from using past authorizations of military force to conduct attacks elsewhere in the world.

As Vox’s Ian Millhiser explained, the expansion of these powers has partly been enabled by the courts over the years, as well as legal opinions offered by the executive branch:

One consequence of judicial deference is that there is fairly little case law explaining when the executive branch can and cannot take military action. Instead, most of the legal opinions in this space were drafted by executive branch officials. According to Jack Goldsmith, a professor at Harvard Law School who led the Justice Department’s Office of Legal Counsel during the second Bush administration, “Practically all of the law in this area has been developed by executive branch lawyers justifying unilateral presidential uses of force.”

The focus of the Iran resolution, led by Sen. Tim Kaine, is pretty straightforward: It reiterates that Congress has not declared war against Iran, and that current congressional war authorizations don’t apply. It also would require the president to remove US troops from any “hostilities” with Iran within 30 days if he didn’t gain congressional approval. It includes exceptions for cases of self-defense and responses to imminent attacks.

“We’re now at a boiling point, and Congress must step in before Trump puts even more of our troops in harm’s way,” Kaine said in a statement.

Lawmakers have repeatedly tried to draw boundaries limiting the use of past Authorizations for Use of Military Force (AUMF) that were approved after 9/11 and before the Iraq War. These authorizations, both of which are nearly 20 years old, have since been used to justify other military action across the Middle East.

Last month, the House passed its own version of this war powers resolution, sponsored by Rep. Elissa Slotkin, as well as two resolutions from Reps. Ro Khanna and Barbara Lee, which would withdraw US military support for the war in Yemen and repeal the 2002 AUMF that enabled the president to take military action in Iraq.

As legal experts have told Vox, however, Congress can only do so much depending on how the administration interprets the various restraints that are passed. If Kaine’s measure were approved and signed into law, for example, it’s possible the administration could attempt to bypass it.

The vote on this resolution follows a January briefing from the Trump administration about the airstrike against Soleimani that’s since prompted intense criticism from both Democrats and Republicans. After Thursday’s vote, Congress’s ability to check Trump remains limited, in part because some Senate Republicans aren’t interested in strengthening it.