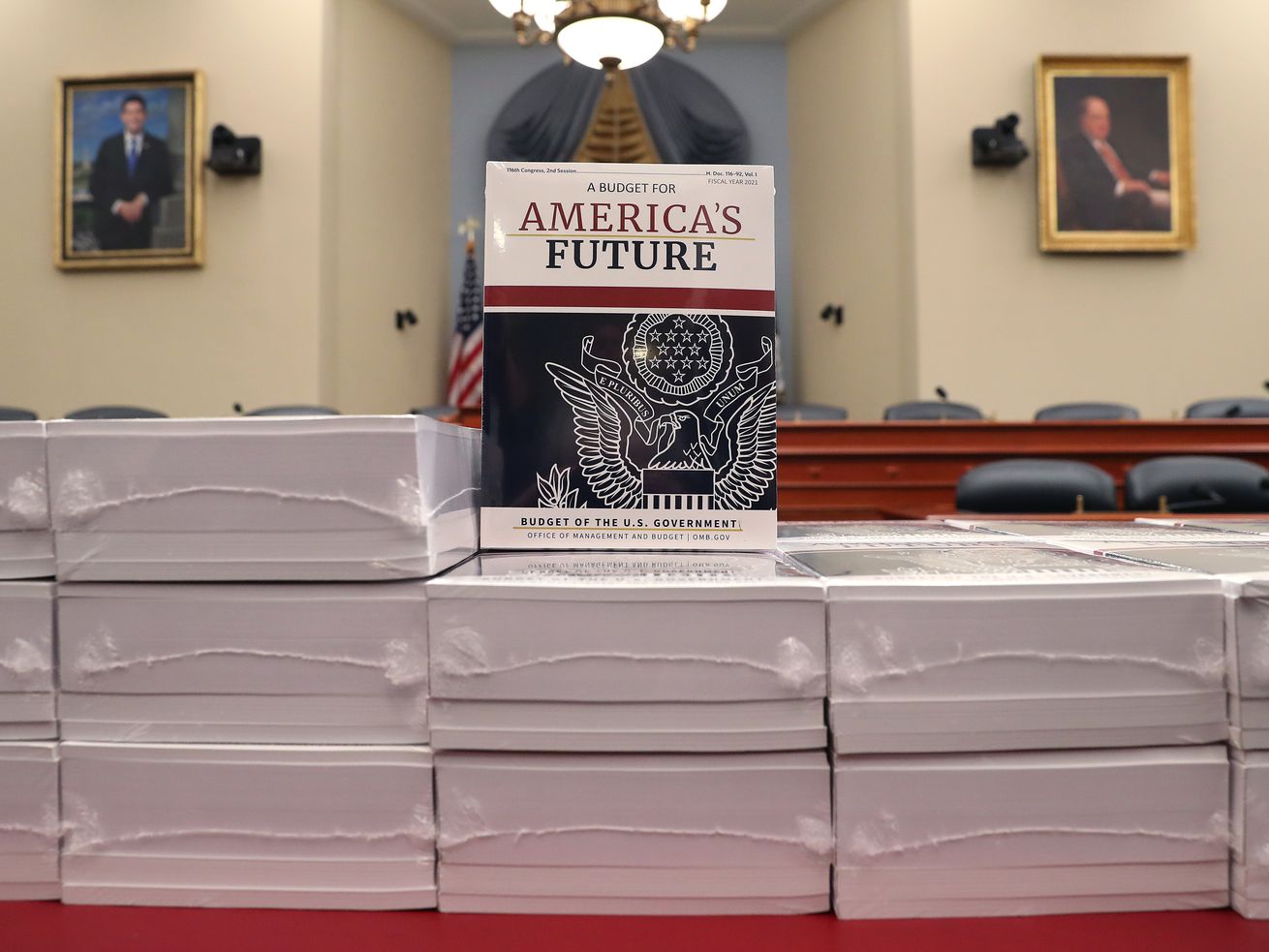 Copies of President Trump’s FY2021 budget are shown after being delivered to the House Budget Committee on February 10, 2020, in Washington, DC. | Mark Wilson/Getty Images

President Donald Trump is about to propose a budget that leans much more heavily on military might — including new spending on modernized nuclear weapons — than diplomatic prowess, funding a muscular foreign policy some worry could lack the necessary finesse to deal effectively with global crises.

The White House’s FY 2021 budget — standing at a whopping $4.8 trillion — is already making waves for deep cuts to social safety net programs like Medicare and Medicaid. Since Congress has to sign off on government spending, the full request is likely dead on arrival due to Democrats’ control of the House. And with no agreed-upon budget, there is no agreed-upon spending. It’s almost guaranteed, then, that the next few months will be filled with partisan fighting and wrangling over how to use taxpayer funds.

Which means the White House’s budget document really serves more as a statement of principles and priorities — the budget, as some say, is policy. When it comes to defense and foreign policy, Trump has once again shown a preference for a stronger military partly at the expense of a weaker diplomatic and development tools.

These ideas make sense in the context of Trump’s historic military spending in which he’s pumped billions of dollars into buying new equipment, giving pay raises to troops, and more. He doesn’t seem to care much about loans to impoverished people, assistance for governments fending off security threats, or providing medical care to those in need.

For some experts, those are necessary trade-offs to keep the US safe in a dangerous world. For others, the administration is sowing the seeds of future turmoil that could prove even more costly than offering smaller investments now.

So to get a better understanding of why reactions are so mixed, it’s worth delving a little deeper into each of these items.

The Trump administration has long been hostile to foreign aid. Just last year, for example, the White House looked to cut more than $4 billion from the US Agency for International Development (USAID) and the State Department. The reason is simple to understand: Trump abides by his “America First” worldview, which in this case means American taxpayer money should be used to fund priorities at home, not to help other countries with their problems.

It’s a theme he hit early and often during his presidential campaign. “It is necessary that we invest in our infrastructure, stop sending foreign aid to countries that hate us and use that money to rebuild our tunnels, roads, bridges and schools,” he said when announcing his candidacy.

The problem, however, is that this foreign aid funding isn’t just charity: Taking nearly $12 billion out of the foreign aid budget would severely harm US diplomatic efforts. For one, giving nations money they need to keep volatile situations stable enhances global security, and could actually prove cost-effective to the US if the money helps prevent catastrophe at home or abroad down the line.

“Prevention is far cheaper than an ex-post cure,” Lester Munson, a former deputy assistant administrator at USAID during George W. Bush’s presidency, wrote for the Brookings Institution last year. “The persistence of certain fragile states, mostly in Africa and the Near East, and the consequent instability, poverty, and violence — even leading to international terrorism — cries out for a global solution. Sensible, pragmatic, and well-funded programs are required that can prevent instability and extremism.”

Even a former Joint Chiefs chair, Adm. Mike Mullen, expressed concern about a declining foreign aid budget. “The more we cut the international affairs budget, the higher the risk for longer and deadlier military operations,” he wrote in a February 7 letter to congressional leaders.

Aid could help with one of Trump’s top priorities: immigration. Trump last April froze $450 million in support to El Salvador, Guatemala, and Honduras. That took away needed direct support for people living in extreme poverty and danger in those nations, leading them to seek better opportunities in the United States. In 2018, for example, more than 116,000 Guatemalans crossed over the southern US border — more than any nation except Mexico.

“There’s no support from our government at all,” Leslie Karina Azañón González, a Guatemalan beneficiary of a US-backed assistance program, told NPR last September. “Any aid or investment the government sends goes to the municipal government, and then everyone takes a piece and nothing gets to us.”

In years past, Republicans and Democrats have pushed back against these draconian slashes to foreign aid, and they are likely to do so again. But the president’s insistence on tearing down America’s assistance programs to bare bones — even though they hover at only around 1 percent of the federal budget — shows how misguided he is about their outsize impact.

The United States has the second-largest nuclear arsenal in the world, behind Russia, but with many of these systems dating back to the Cold War, keeping warheads, bombs, and delivery systems up to date is extremely expensive.

In 2017, the nonpartisan Congressional Budget Office estimated that modernizing the nuclear arsenal would cost $1.2 trillion over 30 years. That would require a herculean effort on behalf of multiple, subsequent administrations — not to mention the continued patience of taxpayers — to ensure it was completed. Trump’s proposed billions, championed by Republicans and criticized by Democrats, is one step in that direction.

Experts are split on whether a nuclear modernization program, which gained steam in the Obama years, is a good idea. “If you’re going to have the force, make sure it’s safe, secure, and reliable,” says Vipin Narang, a nuclear expert at MIT. “Some, not all, of the force and the delivery platforms are decades old.” He added that “it just can’t sit and rot.”

Kingston Reif of the Arms Control Association, though, disagrees. “The administration’s nuclear weapons spending plans are unnecessary and unsustainable,” he told me. “The costs and opportunity costs of the plans are real and growing, and the biggest nuclear modernization bills are just beginning to hit.”

Reif offered an alternative: “Scaling back the plans for new delivery systems, warheads, and infrastructure would make the modernization effort easier to execute and reduce the threat to other defense programs while still leaving a devastating deterrent.”

It’s worth noting that Trump has pulled the US out of a massive arms control treaty with Russia, and it may not extend another vital one next year. Some experts worry that could lead to an arms race, causing the US to spend even more on nuclear systems down the line.

Both experts do agree on one thing — namely, that the US shouldn’t sacrifice a potentially vital vehicle to pay for modernization. The Navy decided not to build a Virginia-class submarine — which can hide from enemy defenses and shoot missiles — to refurbish the arsenal. It seems more likely that a submarine would prove more usable in a war with China than an upgraded bomb, since the bar for using a nuclear weapon is so high.

Which means this may be one of the biggest budgets fights on national security coming up as lawmakers decide how much to let Trump improve America’s creaking arsenal — and what the US might have to give up to do so.