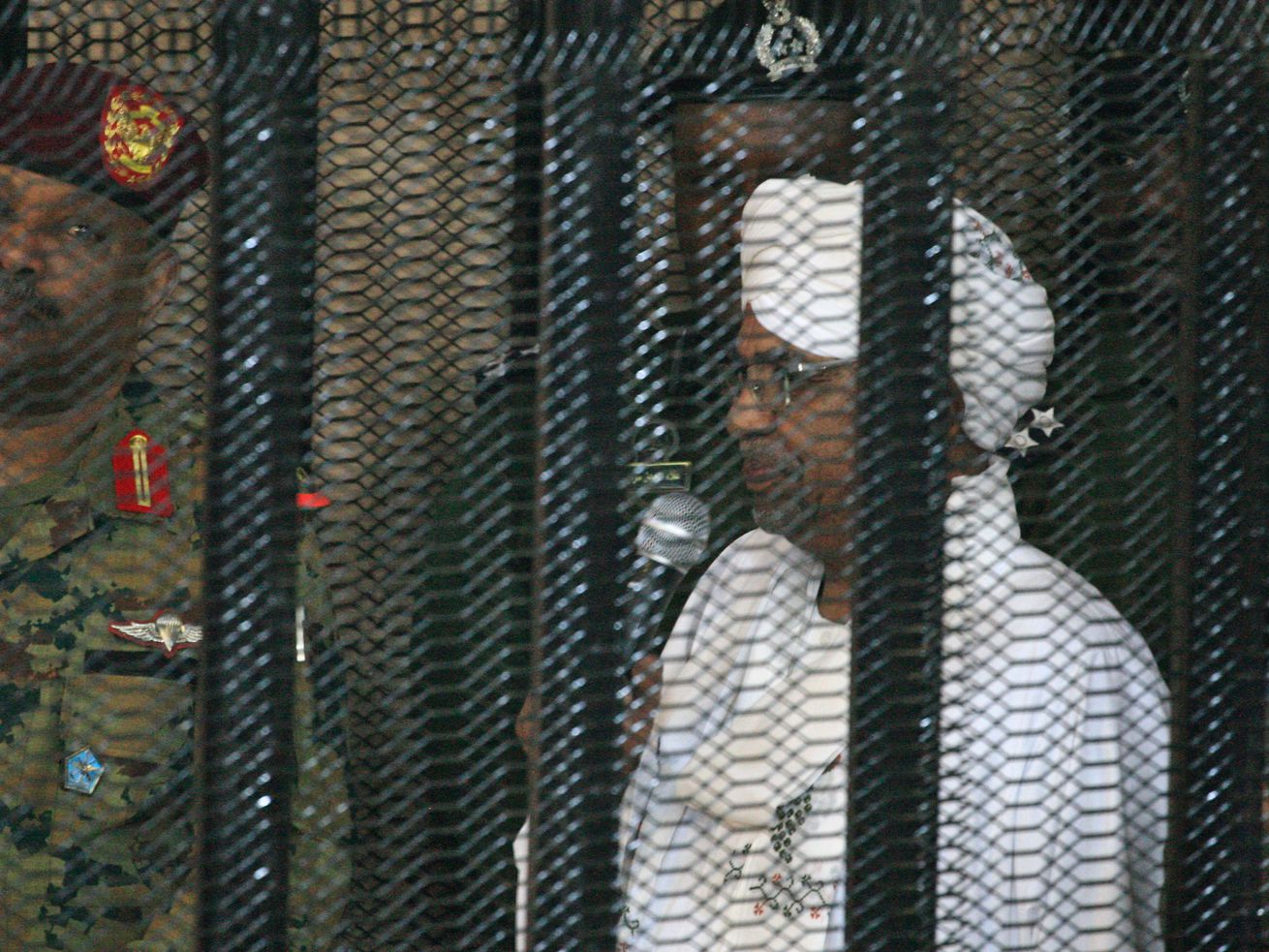 Sudan appears to have agreed in principle to Omar al-Bashir facing charges before the International Criminal Court. But nothing is guaranteed yet.

This is still a very, very big maybe. But on Tuesday, Sudan’s new joint military-civilian council offered the first real signals that the former leader could finally appear before the International Criminal Court (ICC) to charges of genocide, crimes against humanity, and war crimes for his role in the genocide in the Darfur region that began in 2003.

Mohammed Hassan al-Taishi, a civilian member of Sudan’s ruling sovereign council, said Tuesday that the council had “agreed that everyone who had arrest warrants issued against them will appear before the ICC. I’m saying it very clearly.”

The announcement came during peace talks in Juba, South Sudan, between the council and rebel groups in Darfur.

“We can only achieve justice if we heal the wounds with justice itself,” al-Taishi said. “We cannot escape from confronting that.”

Al-Taishi did not mention al-Bashir directly, but his is the name everyone had in mind.

In April 2019, al-Bashir was ousted in a coup after months of intense protests. The military took over, but protests continued until July, when the civilian leadership and the military came to a power-sharing deal that vested power in an 11-person sovereign council, which would first be led by a military official, then a civilian leader, until elections could be held in 2022.

But what would happen to al-Bashir as Sudan tries to remake itself after a 30-year dictatorship has always been a central question in the country’s transition.

The Sudanese government has now offered the possibility that al-Bashir could finally be held accountable for his campaign of terror in Darfur.

But, well, there are a lot of buts.

The most important might be that, so far, if this has been agreed to in principle as part of peace talks, it is not a final agreement, Rebecca Hamilton, an associate professor at American University’s Washington College of Law who’s studied Darfur, told me. Until a text is finalized, and al-Bashir’s turnover to the ICC is explicit, it’s too soon to tell if it will actually happen.

Yousra Elbagir, a reporter for Channel 4 news, said a Sudanese senior official told her they’re trying to work out a way that al-Bashir and others can “appear” before the ICC without actually being extradited to The Hague.

Fadi El Abdallah, the ICC spokesperson, told Vox in an email that the court is following the news regarding al-Bashir, but that “we have no official confirmation on our side at this moment.”

Sudan’s sovereign council has been working to bring peace to restive regions of Sudan, including Blue Nile and South Kordofan and Darfur, where sporadic conflict has continued, if not on the scale it did during the early 2000s.

Darfuri victims have long said that al-Bashir facing justice before the ICC should be a condition of any legitimate peace deal. “Bashir and his aides who committed the crimes in Darfur must be handed over to the ICC if peace is to be established in the region,” Jamal Ibrahim, who was displaced by the conflict, told the AFP in October.

The announcement offers real hope that this might happen, but it’s far too premature to say with any certainty that it will happen.

“Cautious optimism is the name of the game,” Hamilton said. “It’s nowhere near a done deal, but I think the fact that the conversation is happening — that’s pretty extraordinary.”

Even talking about sending al-Bashir to the ICC is a really, really big deal

The prospect that al-Bashir could potentially appear before The Hague is extraordinary because this once seemed all but impossible.

The conflict in Darfur, in the western part of Sudan, began around 2003, when al-Bashir moved in to violently put down an insurgency. He relied on pro-government, mostly Arab militias — known collectively as the “janjaweed” — who are accused of carrying out heinous atrocities, including scorching villages that left potentially millions displaced and systematic rape and murder against mostly non-Arabs in the region. The United Nations estimates about 300,000 people were killed.

The ICC issued a warrant for al-Bashir’s arrest in 2009 (genocide charges were added later, in 2010). Through it all al-Bashir defied justice — sometimes blatantly flouting the ICC by traveling to countries that should have been forced to detain him. It revealed the limitations of the ICC and the reach of international justice.

Even after al-Bashir’s ouster, powerful figures in the military retained control, both in the transitional military council that first deposed al-Bashir and even now in the joint military-civilian council, leading to skepticism about whether al-Bashir would face international justice.

For example, a sovereign council member, General Mohamed Hamdan Dagalo, sometimes called “Hemedti,” is in charge of the powerful Rapid Security Forces (RSF), which brutally cracked down and massacred protesters in June. Hemedti rose to prominence commanding a militia in Darfur that violently tried to put down Darfuri rebels.

The ICC continued to push for al-Bashir’s extradition after Sudan’s new government took control, but without success.

Within Sudan, al-Bashir was convicted on charges of corruption and money laundering in Sudan. He has been sentenced to two years in a reform facility. He also faces legal scrutiny for his role in cracking down on the protests that led to his downfall, and has been questioned for his role in the 1989 coup that brought him to power.

But some pro-democracy advocates and victims in Darfur saw the corruption trial as just offering the illusion of justice.

“There is no justice, it is not enough to just try Bashir for corruption,” Sadiq Abdalla Mokhtar, an official in Darfur, told the Independent in December. “As his victims we should have the right to say how and where he is tried, and to us that is only the ICC.”

Experts I spoke to said that bringing al-Bashir to the ICC — if it happens — would be a huge deal, both for Sudan and for the International Criminal Court, which faces frequent criticism for failing to be effectual.

Al-Bashir in a lot of ways was the perfect example of this failing. Sudan isn’t party to the Rome Statute that governs the jurisdiction of the ICC, but al-Bashir’s case was initiated by the United Nations Security Council in 2005 (the US abstained, so it did not block the move), and Sudan is a party of the UN Charter. But al-Bashir traveled abroad even after the warrant and, despite the ICC’s pleas, was never detained or extradited.

Now that the possibility exists that al-Bashir could appear before the ICC, it could help redeem the court, despite the delay in justice. “This will be an important signal that even if the ICC has trouble getting hold of people initially if, down the road, people will end up at the court, that’s an important signal,” David Bosco, professor at the Hamilton Lugar School of Global and International Studies at Indiana University, told me.

This would also be a hugely high-profile case, one of the biggest the ICC has taken on and a true test for the court. Genocide, in particular, is hard to prove — prosecutors will have to show that al-Bashir himself, not just the Sudanese government, deliberately targeted a certain group. Ten years on, there are questions about witnesses and documents and how the case would play out.

But Michael Newton, a professor of the practice of law at Vanderbilt University, said it would be a disgrace if the prosecution isn’t prepared, as the ICC has been insisting to the world to turn al-Bashir over to The Hague for years. Either way, he said, this case would be a watershed for the ICC. “It’s a watershed — to say we really can function effectively.”

And, as Hamilton initially said, it really is extraordinary, this potential turn of events. In less than a year, massive protests brought down a 30-year dictatorial reign, and soon after, those civilian protesters reached an agreement with the military to establish a transitional government. This is a shaky, imperfect process — but so far, the sovereign council is trying to steer Sudan into an entirely new chapter.

Under al-Bashir, Sudan was something of an international outcast — for the genocide in Darfur, but also for al-Bashir’s support for terrorism. Sudan, under this new government, is trying to rehabilitate its relationship with the international community, particularly beyond Africa and the Gulf States, where it’s always had some influence or ties. The US and Sudan, for example, in December agreed to exchange ambassadors for the first time in more than 20 years, though the US has yet to drop Sudan from its state-sponsor of terror list.

If Sudan cooperates with the ICC, it would be a significant commitment to human rights and international law on the world stage. As Newton put it, it would mark a break with the past and show that Sudan is serious about grappling with questions of human rights and democracy.

Sudan still has many, many challenges that al-Bashir’s extradition can’t immediately fix. But such a move would be more than symbolic — especially to the victims of Darfur. “There’s real chance to put an exclamation point on the past,” Newton said, “and move to a future that’s aligned with the interest of victims.”