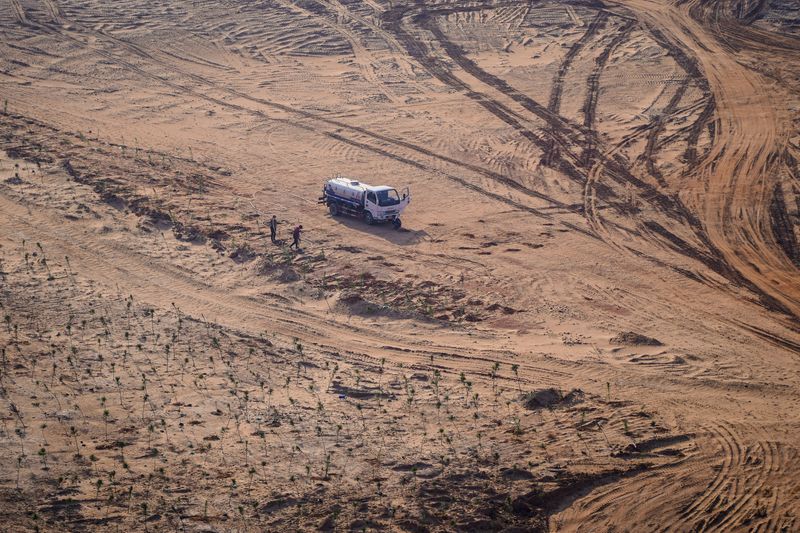 WASHINGTON (Reuters) - Republican lawmakers on Wednesday proposed legislation setting a goal for the United States to plant a trillion trees by 2050 to fight global warming, a plan intended to address climate change by sucking carbon out of the air instead of by cutting emissions.

The proposed legislation reflects an acknowledgement by some in the Republican Party of rising voter demand for action on climate change, even as it seeks to preserve the economic benefits of a historic drilling boom that has made the United States the world’s biggest oil and gas producer.

Republican President Donald Trump, who has repeatedly cast doubt on the science of climate change, had expressed support for the idea of a massive tree-planting campaign during a speech at the World Economic Forum in Davos, Switzerland, last month.

"Our part at home is a lot more than just planting trees. It's utilizing the full abilities of sustainable forestry," said congressman Bruce Westerman of Arkansas, a member of the House of Representatives' Natural Resources Committee who introduced the tree planting bill.

The bill was one of several elements of a broader proposal on climate change introduced by a half dozen House lawmakers on Wednesday.

Additional bills will be released over the coming weeks, focusing on expanding a tax credit to bolster carbon capture technology from power plants and directly from the air, creating a research hub to advance those technologies, and boosting "clean" energy, including natural gas and nuclear.

The bills focus on technology "innovation" and avoid setting a price for carbon pollution and setting or enforcing emission reduction mandates.

Democrats, including all the top presidential hopefuls in this year’s election, have made proposals for a rapid shift away from fossil fuels to help the United States and other countries avoid the worst impacts of climate change.

House Republican Leader Kevin McCarthy told reporters on Wednesday their approach stands in contrast to "command-and-control" policy approaches introduced by some Democrats such as the Green New Deal, which calls for massive government investment in nationwide emissions-free infrastructure.

He and other lawmakers said they do not believe carbon taxes were needed to spur innovation.

Environmentalists argue that focusing on planting trees or investing in carbon sequestration technology while ignoring emission cuts from fossil fuel use is counterproductive. An overwhelming majority of scientists believe emissions from the combustion of fossil fuels are the main driver of climate change.

“Planting trees is good, of course, but it is nowhere near enough of what is needed, and it cannot replace real mitigation and rewilding nature,” Swedish teen activist Greta Thunberg said in Davos last month.

James Mulligan, a senior associate at the World Resources Institute research organization, said mass tree planting could reduce between 180 million and 360 million tons of carbon dioxide per year by 2040 if implemented correctly.

"Funding is key," he said, adding that the program needs a "smart governance system."

U.S. Representative Garret Graves, a Louisiana Republican who serves on the House Select Committee on the Climate Crisis, said focusing on natural and technological sequestration would enable the United States to reduce emissions without shutting down the energy industry.

"Those who have labeled fossil fuels the enemy have misidentified the enemy," he told reporters, saying emissions were the true enemy.