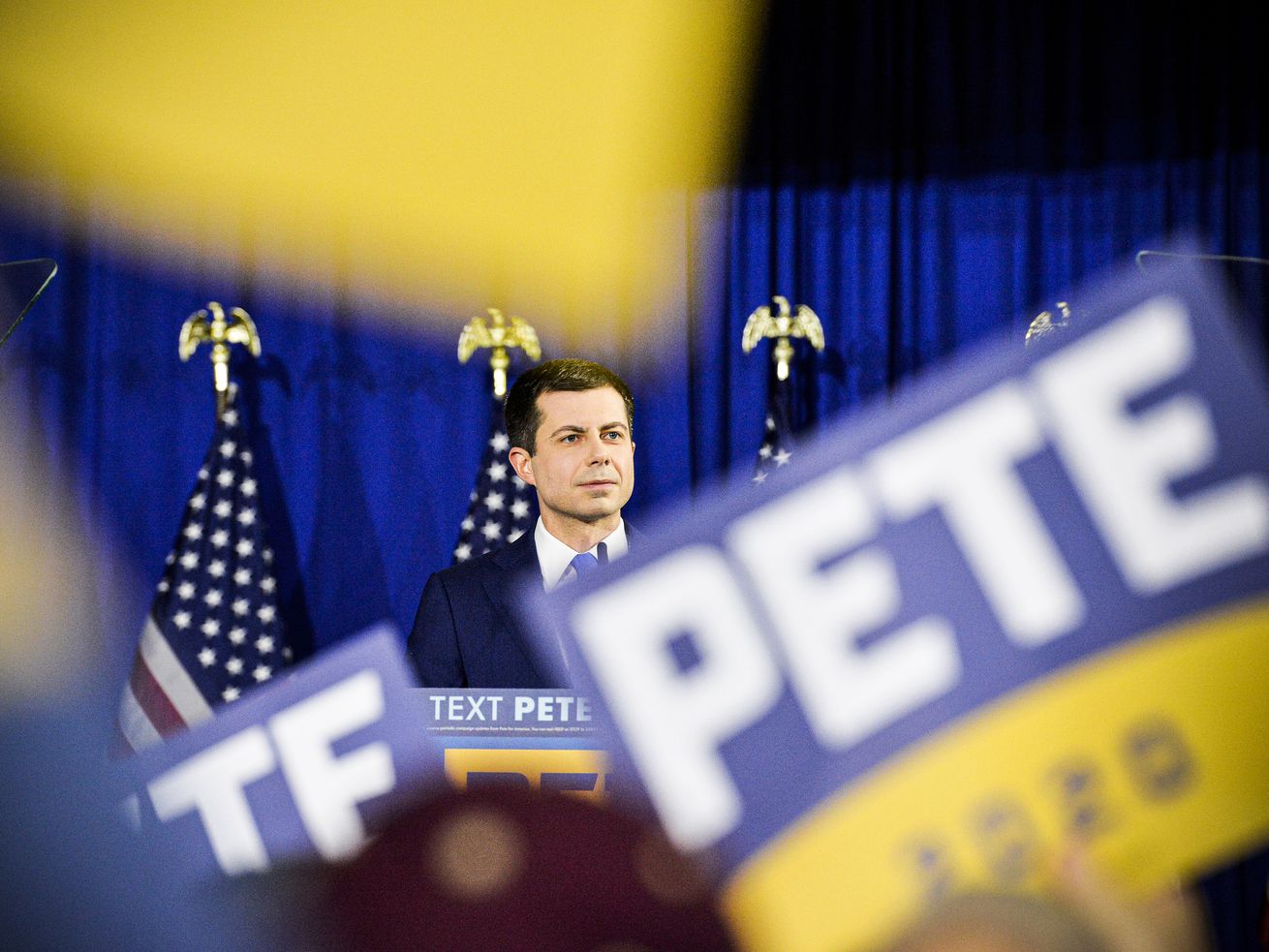 Pete Buttigieg speaks to his supporters during a primary night rally in New Hampshire, on February 11, 2020. | Joseph Prezioso/AFP via Getty Images

He’s declining to answer old foreign policy questions and even dodging some new ones.

Former South Bend, Indiana, Mayor Pete Buttigieg is emerging as a Democratic frontrunner, which naturally will increase scrutiny on his domestic and foreign policy positions. But he’s creating a problem for himself on the latter: His campaign is no longer providing fresh answers to foreign policy questions from interested parties like the media.

A fixture of the presidential campaign cycle is that organizations — from interest groups to think tanks to news outlets — ask candidates questions, often via surveys, to better grasp where the candidates stand on key issues. This is particularly true on foreign policy, since a president has almost unilateral authority to run global affairs, and it’s good for voters to know how a candidate would wield such power.

But the Buttigieg campaign has a new stance: If it’s a question the candidate has answered before, anywhere, he’s not going to give a fresh response on a questionnaire. Instead, he’ll merely point back to a previous statement he’s made on the issue.

”Pete frequently talks about foreign policy and the challenges the next Commander-in-Chief will face at his events, in interviews and on the debate stage,” Buttigieg campaign spokesperson Sean Savett told me. “As Vox readers know, foreign policy challenges are complex. We’ve found that some questionnaires ask simple yes or no questions when nuance is required.”

This became evident with the New York Times’s recent foreign policy questionnaire, which was given to all the 2020 candidates.

Experts quickly noticed that many of the responses Buttigieg gave on questions like his strategies for Iran or North Korea merely referred back to answers he offered the Council on Foreign Relations think tank last year, or to his summertime foreign policy address.

Totally unacceptable from @PeteButtigieg. The @nytimes is out with a tremendously helpful questionnaire of where the candidates stand on foreign policy. See if you can notice the trend in Mayor Pete's answers. pic.twitter.com/MEctZBKcGC

The reason? Apparently the Buttigieg campaign’s new stance, as expressed in an email they sent to the Times and shared with Vox.

“We actually looked through the questions and feel that Pete has addressed these issues on the campaign trail and in previous surveys,” a campaign spokesperson wrote to a Times reporter on December 23, about six hours after receiving the newspaper’s Google questionnaire with many yes-no questions. “We are declining and instead point you to his responses in this survey from the Council on Foreign Relations as well as his full remarks from his foreign policy speech in June.” The team included links to both.

“Thank you for the opportunity!” the email concluded.

It’s a surprising and disheartening decision for the former naval intelligence officer, who can reasonably claim to understand the intricacies of war and national security better than many of his fellow candidates. Voters in New Hampshire made clear in Washington Post exit polls Tuesday night that Buttigieg is a trusted Democratic candidate on foreign policy.

Frankly, then, it’s hard to comprehend why he won’t speak about global affairs more often. It’s especially puzzling when one realizes he hasn’t answered about one-third of the questions he’s been asked in foreign affairs questionnaires, based on my review of the surveys.

This means voters in the remaining 48 states will have to choose a candidate who now declines to expand on the worldview he laid out before, making it harder to decide who should be the next commander in chief.

“Whoever one supports in 2020, it’s time to stop pretending like it is ok to not be honest and upfront on the single policy area where President’s have the most control and most latitude,” Stephen Miles, the executive director of the Win Without War advocacy group, tweeted about Buttigieg’s newfound silence last week. “Foreign policy may not be where elections are fought, but it is what defines the Presidency.”

Buttigieg has become more guarded on his foreign policy views

Earlier in the campaign, Buttigieg was much more open about how he would handle global affairs.

Five organizations gave the former mayor a foreign policy questionnaire between June and September last year, and in all but one case, he answered everything asked. His answers were informative. For example, he told the Council on Foreign Relations he would rejoin the Iran nuclear deal if Tehran “resumes implementing its commitments,” and told the Washington Post he wouldn’t reopen diplomatic negotiations with Syria’s Bashar al-Assad as long he holds on to power.

But Buttigieg simply didn’t respond to FiveThirtyEight’s questionnaire on foreign policy last August, which posed important questions to the candidates. As president, would Buttigieg meet with North Korea’s Kim Jong Un, as Trump has, “without preconditions”? Or would he continue Trump’s flailing policy of pushing Venezuela’s President Nicolás Maduro out of power? Voters who trust that website above others may not know, though they could go elsewhere.

Biden and Sen. Kamala Harris, the latter of whom has since dropped out the race, also didn’t respond to that survey. One explanation, of course, is that campaigns get very busy, and sometimes they just can’t muster up the staff power to respond to everything. It’s therefore possible that at the time Buttigieg’s team wanted to answer the questions but simply couldn’t do so before FiveThirtyEight decided to publish.

But this kind of silence soon became a bit of a trend for the mayor’s campaign.

The Council for a Liveable World, an anti-nuclear group, published a questionnaire last September in which Buttigieg didn’t respond to 9 of the 10 questions asked of him. The one he did answer was on whether he’d extend a nuclear treaty between the US and Russia, known as New START — he said he would, as long as Russia remained in compliance with it.

To be fair, Buttigieg wasn’t alone. Klobuchar, just-dropped-out entrepreneur Andrew Yang, and billionaire Tom Steyer also didn’t respond (neither did Trump, for that matter). But Biden, Sen. Bernie Sanders, and Sen. Elizabeth Warren did fully weigh in, clearly showing that top candidates had no issues offering their thoughts on nuclear weapons policy.

The lack of response by many of the candidates, including Buttigieg, troubled the group’s executive director John Tierney, a former nine-term Democratic member of Congress.

“If a candidate cannot answer basic questions about how they would deal with this existential challenge, then why should people trust them with an unchecked authority over the 4,000 nuclear weapons in our active arsenal?” he told me. “Americans deserve to know what their potential leader plans to do with the world’s most destructive weapons.”

In November, Buttigieg did respond to all of Military Times’s questions on how he would lead the armed forces. The mayor’s answers were insightful, including promising to make curbing the suicide rate among active-duty and veteran service members a “top priority.” The entire survey was Buttigieg at his best: nuanced, passionate, and clear on what he wanted to achieve. One surely hoped he’d continue that trend.

But then the mayor clammed up again with the New York Times questionnaire, where he didn’t answer 19 of the 36 questions.

Of the 109 foreign policy questions Buttigieg was asked in those eight surveys highlighted here, he chose not to answer 36 of them.

Buttigieg does occasionally talk about foreign policy — but not enough

It’s worth noting that Buttigieg has staked out important positions on the campaign trail, such as vowing to withdraw all US troops from Afghanistan in his first year. He’s also openly called out Trump for minimizing the traumatic brain injuries sustained by US troops in last month’s attack by Iran in Iraq.

“Traumatic brain injury is life-threatening, not just at the time but for the rest of your life as well,” Buttigieg told CBS News on January 26. “It makes my blood boil, the president of the United States showing this level of disrespect.” He continues to speak on foreign policy when asked in person, even if on a previous subject, and speaks confidently about many global subjects on the debate stage.

And Doug Wilson, a lead adviser for Buttigieg on foreign policy, pushed back on criticism of the mayor’s reluctance to offer newer answers, saying his candidate had already laid out his global vision in last year’s address.

Someone wondering whether @PeteButtigieg has “laid out a clear vision” of global engagement? Unlike hundreds of respected foreign policy professionals supporting Pete, they must have missed his June speech at Indiana University. Here you go: https://t.co/fPtbM48pjg

But other candidates — from Biden to Sanders to Warren to Klobuchar — have also given foreign policy addresses and answered the majority, if not all, of the questions in these surveys. Even in my own reporting, Buttigieg’s team failed to respond to pointed questions about US landmine policy and whether the US should have low-yield nuclear weapons on submarines. These were new questions, not ones he’d answered in previous surveys.

Buttigieg’s decision, then, is a disservice not only to him — since he’s seen as someone who could manage foreign policy well — but also to the voters who deserve to hear from him more on these issues.