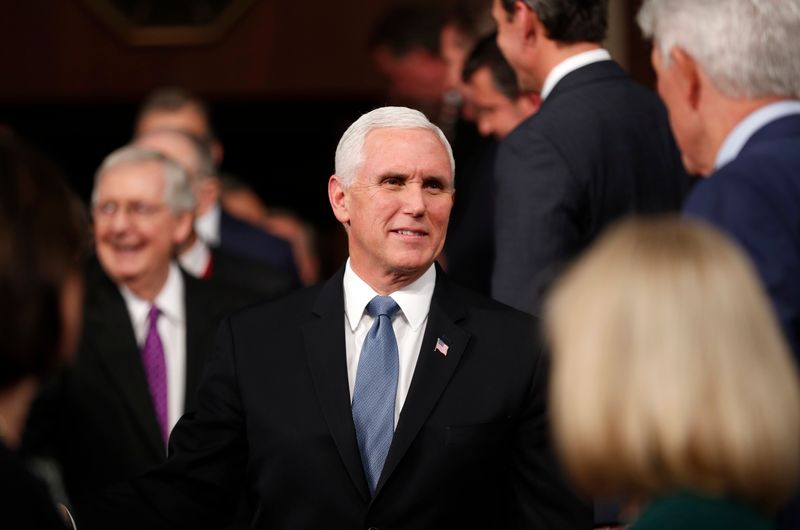 © Reuters. U.S. President Trump delivers State of the Union address at the U.S. Capitol in Washington

Pence suggested an alternative approach when asked by CNBC for his response.

"Great respect to Attorney General Barr, but we believe the best way forward is what Ajit Pai announced just over the last several days," Pence said, referring to the Federal Communications Commission's chairman's efforts to free up more spectrum for 5G wireless use.

"That's the plan the president has endorsed and will be carrying forward," Pence said, adding that the United States can expand 5G "by using the power of the free market and American companies."

A spokeswoman for Barr declined to comment. The White House and a spokesman for Pai did not immediately comment.

Shares in Nokia rose 4% and Ericsson shares were up nearly 5% Friday. Both companies declined to comment.

Nokia and Ericsson have a combined market capitalization of about $53 billion and it is unclear what source of funds the U.S. government could potentially tap to take stakes in the firms or if foreign regulators would approve.

Barr said the alignment could take place "through American ownership of a controlling stake, either directly or through a consortium of private American and allied companies."

Barr said that "putting our large market and financial muscle behind one or both of these firms would make it a far more formidable competitor and eliminate concerns over its staying power, or their staying power."

"We and our closest allies certainly need to be actively considering this approach," he added.