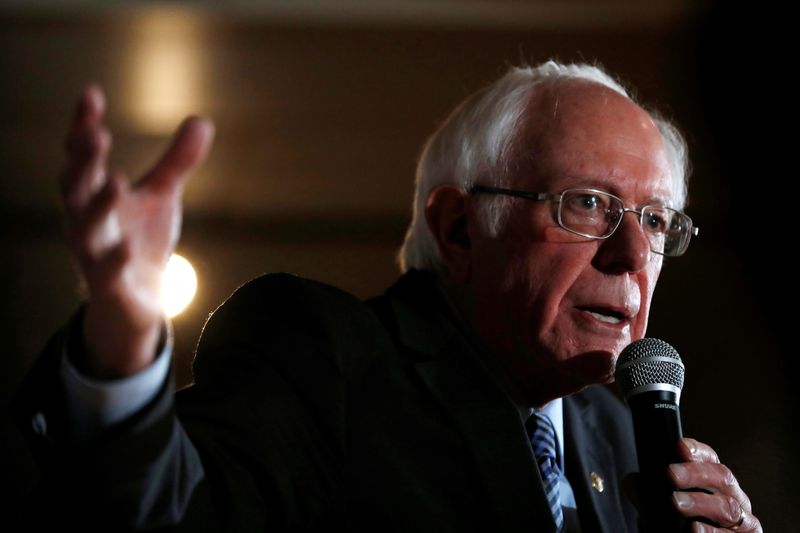 By James Oliphant and Amanda Becker

HUDSON/LEBANON, N.H. (Reuters) - Democratic presidential contenders including Pete Buttigieg and Bernie Sanders, who topped the field in the Iowa caucuses, enter their last full day of campaigning in New Hampshire on Monday as they fight for the chance to seek the White House.

On the eve of New Hampshire's primary, the pair are looking to build on momentum from Iowa last week, where they emerged first and second in delegates, respectively, while nine rivals including U.S. Senator Amy Klobuchar, U.S. Senator Elizabeth Warren and former Vice President Joe Biden try to gain ground.

The man they are all seeking to take on in November, Republican President Donald Trump, will try to command the national spotlight with a campaign rally of his own on Monday night in Manchester, the state's largest city.

"Want to shake up the Dems a little bit - they have a really boring deal going on," Trump said in an early Monday morning tweet touting the event that he said promised "big crowds."

Sanders, 78, an impassioned progressive who serves as a U.S. senator for neighboring Vermont, has long led in opinion polls for the New Hampshire contest. But Buttigieg, a 38-year-old moderate and military veteran who served two terms as mayor of South Bend, Indiana, has rapidly gained ground since Iowa.

Here are highlights from Sunday's campaigning and a look ahead to Monday:

Buttigieg, who would be the first openly gay U.S. president, and Sanders sparred on Sunday over visions for their party and fundraising models.

"The idea that we've either got to wait for a revolution or wait for the status quo leaves most of us out," Buttigieg said in a thinly veiled references to Sanders and Biden. "We need a politics that brings all of us in."

Sanders, speaking in Plymouth, criticized Buttigieg for taking money from "40 billionaires," adding: "Our agenda is the agenda that represents working families."

Buttigieg noted he was the least wealthy of the Democratic candidates and said he had never hesitated to stand up to industry.

"Bernie's pretty rich, and I would happily accept a contribution from him," Buttigieg said on CNN.

Julia Cervone, a 54-year-old healthcare worker who supports Warren, said she came to Buttigieg's Sunday rally in her hometown of Salem out of curiosity.

"I wanted to see what all the buzz was about," Cervone said.

Since signing up for Buttigieg's rally, she has been bombarded by texts and emails from his campaign but received nothing from Warren's, even though she is a registered supporter, Cervone said. She said that made her worried for Warren's candidacy.

"My guess is Pete got a big financial boost from Iowa and he's spending it," Cervone said.

"After that debate, something switched," Klobuchar told MSNBC in an interview on Monday. "It just allowed the people of New Hampshire to see me in a different way."

Klobuchar has questioned whether Sanders - a self-described democratic socialist - can attract centrist voters Democrats need to beat Trump, and questioned whether Buttigieg has enough experience as a mayor to counter the president.

"I've won statewide," including rural and suburban areas, she said, making an appeal for the large number of undecided and independent voters in the state and noting just a few thousand votes handed Trump victories in several key states in 2016.

The Globe's poll, conducted with Suffolk University and WBZ-TV, showed Sanders with 27% ahead of Buttigieg with 19% and Klobuchar with 14% among 500 likely voters polled over the weekend. Biden and Warren each saw 12% in the survey, which had a margin of error of plus or minus 4 percentage points.

The Sanders campaign expects to draw a large crowd in Durham on Monday evening when progressive star U.S. Representative Alexandria Ocasio-Cortez and rock band The Strokes join him for a rally.

Warren, Klobuchar, Buttigieg, entrepreneur Andrew Yang and the rest of the Democratic field also plan events through the state.

Warren sought to excite voters on Sunday with her detailed "a plan for that" pitchbook.

'IT MAKES ME ANGRY!'

"I'm still leading nationally," he told CBS News in an interview on Monday, downplaying any political baggage from having his name dragged into Trump's impeachment proceedings. "We're just getting started."

"We are in the battle for the soul of this country," he told "CBS This Morning" vowing to unite all Americans.

He described his weekend visit to a Manchester food bank where he and his wife, Jill, handed out food in the middle of a parking lot on a bitterly cold morning. "What in God's name is happening to us?" he told the crowd. "This is the United States of America, and it makes me angry!"