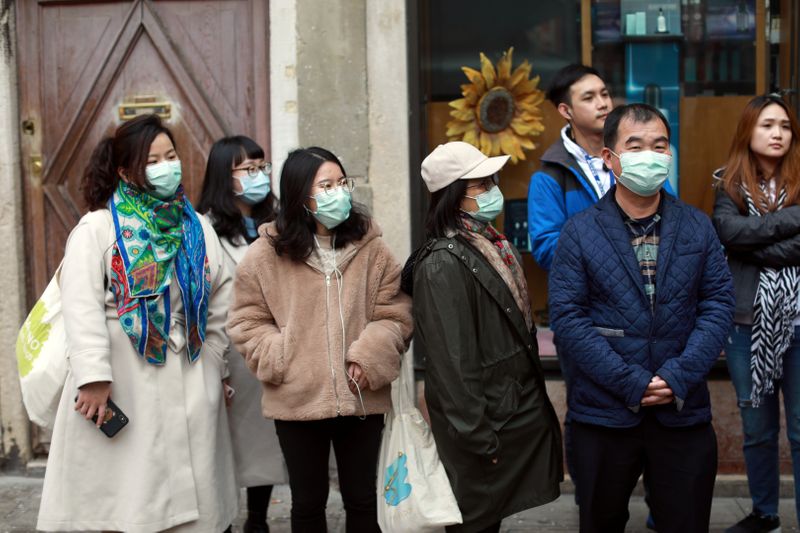 © Reuters. People wear protective masks at Venice Carnival, which the last two days of, as well as Sunday night's festivities, have been cancelled because of an outbreak of coronavirus, in Venice

SINGAPORE (Reuters) - Oil prices tumbled more than 2% on Monday, as the rapid spread of a coronavirus in several countries outside China left investors fretting about a hit to demand.

Global shares also extended losses as concerns about the impact of the new virus grew, with the number of infections jumping in Iran, Italy and South Korea.

"Demand destruction for crude is likely to intensify as travel restrictions will likely increase as the coronavirus outbreak becomes a global threat and not just contained to China," said Edward Moya, senior market analyst at OANDA.

"Oil prices will remain vulnerable here as energy traders were not pricing in the coronavirus becoming a pandemic.

"While some parts of China are seeing improving statistics with the coronavirus, financial markets will remain on edge until we start seeing the situation improve in Iran, Italy, South Korea and Japan."

South Korea's fourth-largest city, Daegu, grew increasingly isolated as the number of infections there rose rapidly, with some airlines suspending flights to the city until March 9 and March 28 respectively. The country reported its seventh death after raising its infectious disease alert to its highest level.

In Paris, French Health Minister Olivier Veran said he would talk with European counterparts soon on how best to tackle a possible epidemic, after Italy reported a third death from the flu-like virus and 150 infections, versus just three before Friday.

Iran said it had confirmed 43 cases and eight deaths, with most of the infections in the Shi'ite Muslim holy city of Qom. Afghanistan, Iraq, Kuwait, Saudi Arabia and Turkey imposed travel and immigration curbs on the Islamic Republic.

"We should not underestimate the economic disruption as a super spreader could trigger a massive drop in business activity around the globe of proportions the world has never dealt with before," Stephen Innes, chief market strategist at AxiCorp, said in a note on Monday.

Chinese President Xi Jinping said on Sunday the world's largest energy consumer will adjust policy to help cushion the blow to the economy from the virus outbreak.

In the United States, the oil rig count, an indicator of future production, rose for a third straight week. Drillers added one oil rig last week, bringing the total count to 679, the highest since the week of Dec. 20, energy services firm Baker Hughes Co said.