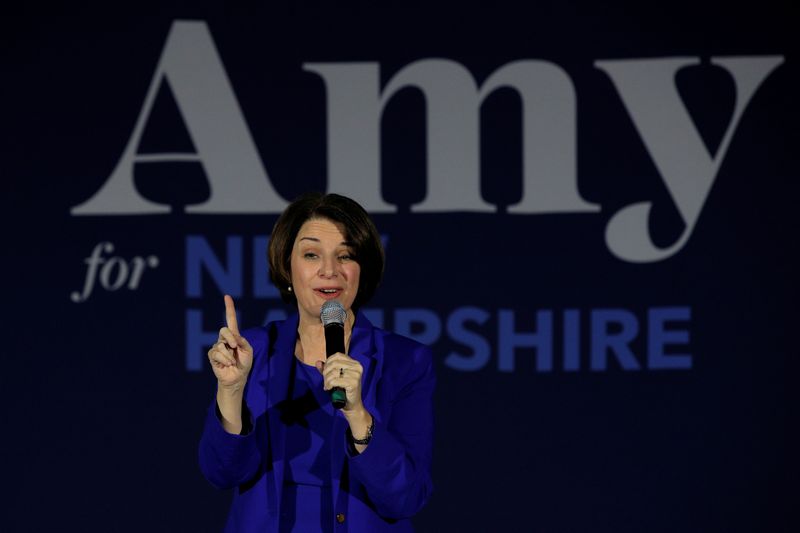 NASHUA, N.H. (Reuters) - U.S. Democratic presidential candidate Amy Klobuchar's poll numbers are rising, her crowds are building and she says it is finally her time.

Voters in New Hampshire will decide on Tuesday if she is right.

Klobuchar, a moderate U.S. senator from Minnesota who has been stuck in the middle of the crowded Democratic presidential pack, rose to third place in New Hampshire in a pair of opinion polls released on Monday, the day before the state's vital primary.

A Klobuchar surge would reshape the race. With the campaigns of moderate Joe Biden and progressive Elizabeth Warren struggling, it would put her in line to battle rival Pete Buttigieg, the former mayor of South Bend, Indiana - and eventually billionaire former New York Mayor Mike Bloomberg - for leadership of the party's centrists in their fight against progressive standard-bearer Bernie Sanders.

"Amy is a candidate who can win big, and we are the ones who are going to launch her," New Hampshire state Senator Jeanne Dietsch told supporters at a get-out-the-vote rally on Monday in Keene.

Klobuchar, 59, has drawn bigger crowds and more campaign cash after a strong performance in last week's New Hampshire debate, where she attacked the 38-year-old Buttigieg for his lack of political experience and his criticism of Washington insiders. She also detailed her history of winning races in conservative or battleground areas, and showed her flair for making her point with humor.

But Klobuchar said the roots of the renaissance were in her work in the state. She has visited New Hampshire 23 times since she jumped in the race a year ago and has been endorsed by leading state papers including the Manchester Union Leader and Keene Sentinel.

"We feel the surge. For me, it's been a long time coming," Klobuchar said in Keene.

Beyond New Hampshire, she faces significant challenges in a party uncertain about what kind of candidate it wants to face Republican President Donald Trump in November - a moderate who can appeal to the middle or a progressive who excites the party's base.

In a Reuters/Ipsos national poll released on Monday, Klobuchar garnered only 3% support - well behind Sanders at 20%, Biden at 17%, Bloomberg at 15% and several others.

Klobuchar said her message about her appeal to moderates, independents and disaffected Republicans was beginning to sink in. At each campaign stop, she promised to win back Midwestern and rural voters, implying the party's progressives like Sanders and Warren could not.

Klobuchar pulled in her biggest New Hampshire crowd of 1,100 on Sunday in Nashua. Her campaign said she had raised more than $3 million online since the debate.

In the two new state polls on Monday, she moved ahead of Biden, the former U.S. vice president, and Warren, a senator from neighboring Massachusetts who was once considered a front-runner in New Hampshire.

A Boston Globe poll, conducted with Suffolk University and WBZ-TV, showed Klobuchar with 14% support, just 5 percentage points behind Buttigieg at 19%. Sanders led with 27%.

Ira Adler, 58, a FedEx (NYSE:FDX) courier who lives in Nashua, said he was leaning toward Buttigieg before the debate but was now leaning toward Klobuchar.

"She has done really well on the debate stage. She is strong and tough," Adler said. "I think she could stand up to Trump."

Klobuchar rarely mentions her Democratic rivals on the campaign trail, sticking to a folksy stump speech filled with wisecracks, biography and pledges to lower pharmaceutical costs, improve infrastructure and increase funding for treatment of drug addiction and mental health.

At a lunch in Nashua, however, Klobuchar reminded the crowd she was the only one to raise her hand in Friday night's debate when moderators asked if the candidates were concerned about a democratic socialist - Sanders - leading the ticket.

Klobuchar cited her objection to the proposals by Sanders and Warren to provide free public college tuition. She prefers to focus on promoting two-year and apprenticeship education programs "instead of using taxpayer money to send wealthy kids to college."

Liz Racioppi, 66, a small-business owner in Nashua, said the significant number of undecided voters in New Hampshire - some polls put it at more than one-third - gave Klobuchar a chance for a good showing.

"She's been doing a slow rise, but a lot more people are starting to listen to her now," she said.