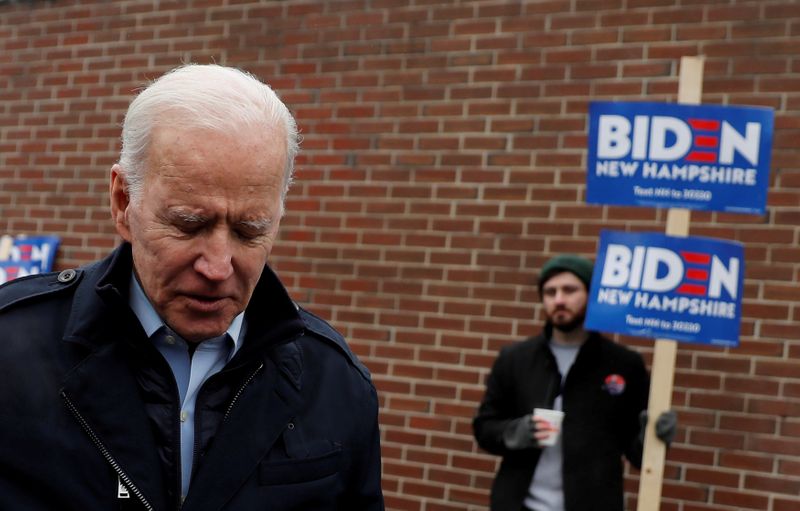 © Reuters. FILE PHOTO: A supporter for Democratic 2020 U.S. presidential candidate and former Vice President Joe Biden holds a sign as Biden leaves a polling station after a visit, on the day of New Hampshire's first-in-the-nation primary in Manchester, New Ham 2/2

By James Oliphant and Trevor Hunnicutt

Before the polls had even closed, the Democratic presidential hopeful had left New Hampshire, where he ultimately posted a fifth-place finish. The dismal performance came just eight days after the Iowa caucuses, where Biden finished fourth.

The back-to-back stumbles have created a difficult situation for Biden, who must perform well in upcoming contests in Nevada and South Carolina this month to show voters and donors that his candidacy remains viable.

David Hopkins, an expert in presidential campaigns at Boston College, said no candidate has ever gone on to win the Democratic nomination who finished lower than third place in Iowa and New Hampshire.

“Does Biden have the resources to sustain a comeback?,” said Hopkins. “It’s hard to tell in this trajectory whether you are going to bounce back or just keep going downhill."

Biden, the affable former vice president, has tried to downplay his early struggles. Iowa and New Hampshire are small states with few delegates whose populations are overwhelmingly white and unrepresentative of the country overall, his campaign has argued.

The candidate is looking to Nevada and South Carolina, the next two states on the nominating calendar, to revive his fortunes. Nevada boasts large numbers of unionized workers and Latino voters. South Carolina has a heavy concentration of African-American voters, who have shown a strong affinity for Biden, the former running mate of Barack Obama, America's first black president.

While Sanders, Buttigieg and a suddenly surging Klobuchar celebrated their strong showings in New Hampshire on Tuesday night, Biden headed to a rally in South Carolina.

"Up 'til now we haven’t heard from the most committed constituency in the Democratic Party, the African-American constituency," Biden said in Columbia, the capital.

While Buttigieg and Klobuchar have emerged as formidable rivals to Biden in attracting moderate Democratic voters, they so far have attracted little support among Latinos or African Americans, whose votes will be critical to defeat incumbent Republican President Donald Trump in November. Sanders has attracted Latino support, but has yet to gain traction with black voters.

Biden has touted himself as the only candidate in the race capable of harnessing the Democrats' diverse coalition. But that claim is being challenged by Mike Bloomberg, the billionaire former mayor of New York, who is skipping the four early contests to compete starting on Super Tuesday on March 3.

A national poll this week from Quinnipiac University showed Biden's support among black Democrats, which stood at 51% in late January, has slid to 27%, while Bloomberg's black support has climbed to 22% from 7% over the same period.

On a campaign strategy call on Wednesday, U.S. Representative Cedric Richmond, a co-chair of the Biden campaign, blasted Sanders, Buttigieg and Bloomberg, a former Republican, as too risky to trust with the nomination.

“We cannot afford to take a chance with a self-defined socialist, the mayor of a very small city, a billionaire who all of the sudden is a Democrat,” Richmond said.

Bloomberg, who has spent more than a quarter-billion dollars of his personal fortune on the campaign, is gunning for the same voters Biden will need in later contests in states such as California, Texas and North Carolina.

Biden has relied on traditional fundraisers more than his rivals, who have vibrant digital operations. Biden wrote a plea to donors on Wednesday that said "the donations I get today are the most important, most symbolic ones of the campaign." He is expected to hold fundraisers in New York on Thursday.

Unite the Country, a political action committee supporting Biden, last week sent a memo to its donors urging them to stick with him. The memo said the party cannot afford a situation where moderate Democrats split their ballots between several centrist candidates, allowing Sanders, a self-described democratic socialist, to win the nomination. Many Democrats fear that scenario would hand the general election to Trump, who is already launching broadsides against socialism.

For Biden, 77, to have any chance in the contests ahead, he’ll have to reassure voters he has the best shot to defeat Trump - and that his age and his 40 years in government are assets, not liabilities.

One Democratic donor, who supports Biden and asked that his name not be used in order to speak freely, told Reuters that he started to have doubts as the candidate’s age showed on the campaign trail. The donor said major fundraisers within the Biden campaign were considering Buttigieg as a possible alternative.

“I have plenty of energy and I don’t think I could keep up the demands of the president,” LaFontaine said at a Biden event in Manchester on Saturday. “That concerns me.”

Biden has emphasized his experience and seasoning. And he is not the oldest candidate in the field, a distinction that belongs to 78-year-old Sanders.

The former vice president must hope that the modest crowds he drew in New Hampshire are not indicative of what he'll see in the next few weeks.

While Sanders and Buttigieg frequently attracted throngs of enthusiastic, chanting supporters, Biden spoke mainly to small groups. On Monday he traveled 90 minutes from his base in Nashua to talk to fewer than 100 people, road-testing a new line of attack against Trump.

His message seemed to shift daily. He spent one day ripping Buttigieg and questioning his accomplishments, only to drop the theme the next day, obviously uncomfortable with savaging other Democrats.

On the day of the primary, the campaign appeared scattered and chaotic. Aides announced that morning that Biden would leave New Hampshire for South Carolina, forcing the candidate to spend the rest of the day answering questions about whether he was giving up on the state.

Bob Mulholland, a Biden backer and member of the Democratic National Committee from California, said South Carolina may end up being Biden’s proving ground.

“February is a long month with four elections, and we’ll see who’s standing,” Mulholland said. “If you’re not in the top three in South Carolina, it’s time to pack up and go home.”