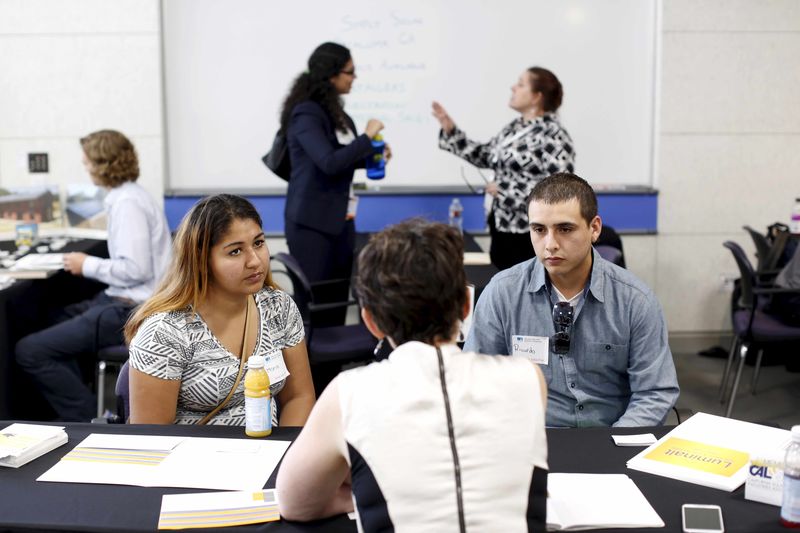 Investing.com -- The U.S. economy stayed in robust health in January, with no visible impact from the Chinese coronavirus outbreak, but the figures weren’t enough to give any further momentum to markets that had already rallied sharply earlier in the week.

The Bureau of Labor Statistics said the U.S. economy created 225,000 jobs in January, well above initial forecasts for a rise of 160,000. However, the impact of the data was blunted by a strong reading for private-sector payrolls from ADP earlier in the week.

With the headline number neutered, market attention focused on other elements of the report, which gave a more mixed picture.

Average weekly earnings, for example, rose only 0.2% on the month, below expectations for a 0.3% gain, but in annual terms they ticked up to 3.1%. Analysts polled by Investing.com had expected that rate to stay at 3.0% this month.

"Slowing wage growth for both supervisors and production workers. Certainly no inflation pressures for the Fed to worry about," said Julia Coronado, a professor of UT Austin and former Federal Reserve economist, via Twitter.

The jobless rate, meanwhile, ticked up slightly to 3.6% from 3.5% - another apparent inconsistency with the strong rise in employment.

Liz Ann Sonders, chief investment officer at Charles Schwab, said the report was “strong”, but noted declines in both manufacturing and retail jobs. These were offset by a big increase in jobs in the education and health sectors, along with construction jobs.

The S&P 500 futures contract edged down in the hour following the report, as market participants found little convincing evidence to add to gains posted so far this week. Although the contract was down 0.4% from late Thursday by 9:25 AM ET (1425 GMT), it was still up more than 2.5% for the week – a remarkable performance given the ongoing concerns about the economic impact of the coronavirus outbreak in China.

On Thursday, both luxury goods maker Tapestry (NYSE:TPR) and auto giant Fiat Chrysler Automobiles (NYSE:FCAU) had warned of negative impacts on sales and production, respectively. Those warnings were echoed by British fashion group Burberry (LON:BRBY) early on Friday, which said footfall in its Chinese stores was down by 80% on the year. However, French cosmetics giant L’Oreal (OTC:LRLCY)– another company with heavy exposure to China - said it expects only a temporary impact.

In other markets, the dollar index was likewise little changed after the numbers, on course for its highest weekly close since September after a 0.7% rise over the week. The greenback has also hit various highs against emerging market currencies this week as other central banks have cut interest rates, reinforcing the impression that the U.S. is better insulated against the outbreak than many other countries.

The benchmark 10-year U.S. Treasury yield fell by three basis points to 1.59% on the report, its lowest in three days.