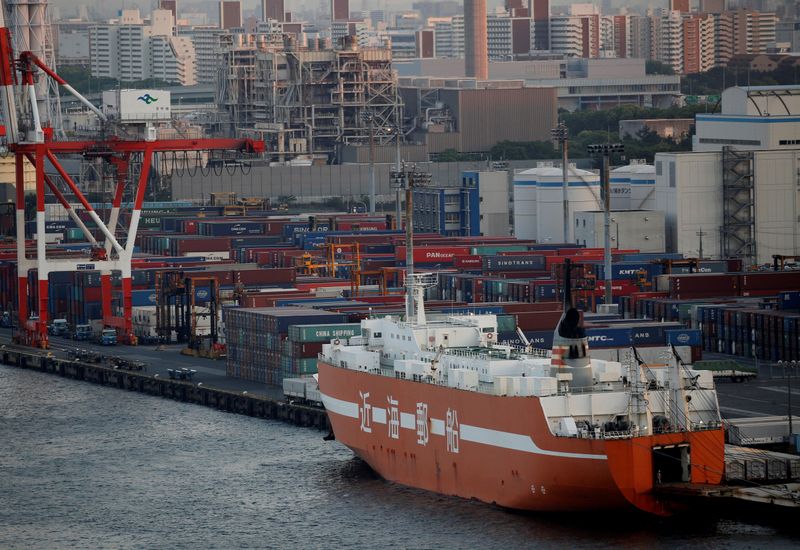 © Reuters. An industrial port is pictured in Tokyo

TOKYO (Reuters) - Worries about the spread of the coronavirus and its hit to the global economy kept Japanese manufacturers' mood gloomy in February, a Reuters poll found, even as firms shook off previous worries about the impact of the Sino-U.S. trade war.

The monthly poll, which tracks the Bank of Japan's key tankan quarterly survey, found business confidence across the sectors remained weak over the next three months, as the coronavirus added to uncertainty over the global outlook and the October national sales tax hike.

The flu-like virus has killed more than 1,700 people in China, and it has already taken a toll on China's economy - Japan's largest trading partner - hampering supply chains for car manufacturers to smartphone makers and causing the number of Chinese shoppers to plunge in Japan.

It has also highlighted the vulnerability of the Japanese economy to external shocks just as worries have somewhat eased over the Sino-U.S. trade war and Britain's exit from the European Union.

On top of external woes, a sales tax hike in October dealt a blow to the consumer sector, which makes up the bulk of Japan's economic activity, dashing hopes that solid domestic demand would offset weak exports.

"Just as the domestic economy's slump following the sales tax hike is becoming evident, the coronavirus spread has made China-bound exports totally unclear," a manager of a chemicals firm wrote in the Reuters poll of 502 large- and mid-sized companies, in which 245 firms replied on condition of anonymity.

The Reuters Tankan sentiment index for manufacturers stood at minus 5 in February, up a tad from minus 6 in the previous month. However, materials industries such as chemicals, steel, paper and pulp put a drag on the overall sentiment index.

The service-sector index inched up to plus 15 from plus 14 in January, but sentiment among retailers, information and communications weighed on overall business confidence, according to the survey conducted Jan. 30-Feb. 12.

The BOJ's December tankan showed big manufacturers' mood hit a near seven-year low in the fourth quarter as the trade war between the world's two largest economies lingered.

The world's third-largest economy shrank at the fastest pace in six years in the December quarter as domestic demand took a hit from the sales tax hike, underscoring the fragile nature of an economy teetering on the brink of a recession.

The Reuters Tankan indexes are calculated by subtracting the percentage of pessimistic respondents from optimistic ones.