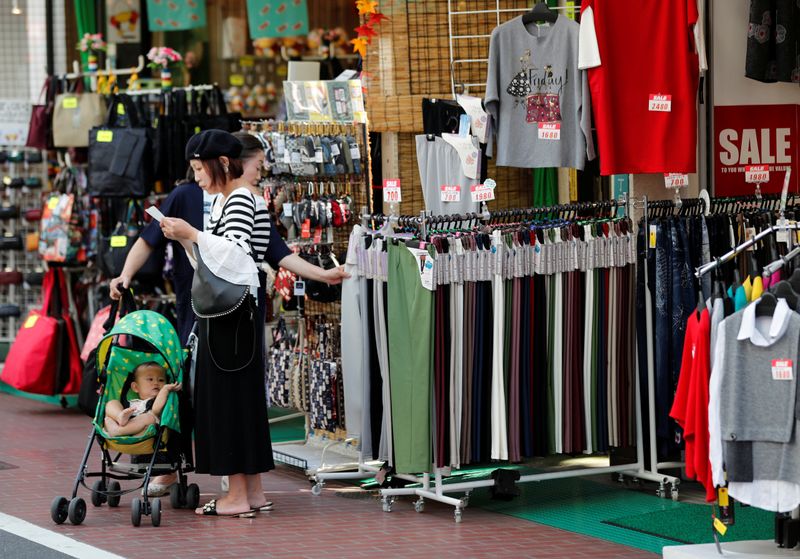 TOKYO (Reuters) - Japanese household spending fell at a much faster pace than expected in December, sliding for the third straight month in a sign consumers are having a hard time coping with a sales tax hike.

Household spending slipped 4.8% in December from a year earlier, government data showed on Friday, coming in well below a median forecast for a 1.7% decline.

Japanese policymakers are hoping on a recovery in domestic demand largely fueled by resilience in consumer spending to help soften the blow to businesses' profits from a delayed pick-up in global growth.

Sluggish wage recovery is leading to further worries about private spending, with inflation-adjusted real wages falling 0.9% to also drop for a third month in December.

While Friday's reading excludes the impact on spending from the virus outbreak originating in China, analysts expect it will hurt consumption in the coming months as tourism takes a hit.

Japan's economy is expected to have shrunk in the fourth quarter last year due to fallout from the sales tax hike and a powerful typhoon, after it had expanded an upwardly revised annualized 1.8% in the July-September period.

A preliminary U.S.-China trade deal had raised hopes globally of a let-up in the pressure facing businesses worldwide, in particular export-reliant nations like Japan.

But uncertainty on how the spread of the coronavirus could affect China - a major engine of global growth - has now cast doubt on the BOJ's optimistic economic projection.

The BOJ expects the economy to recover this year, holding onto hope that global growth will rebound around mid-year and provide a lift to exports.