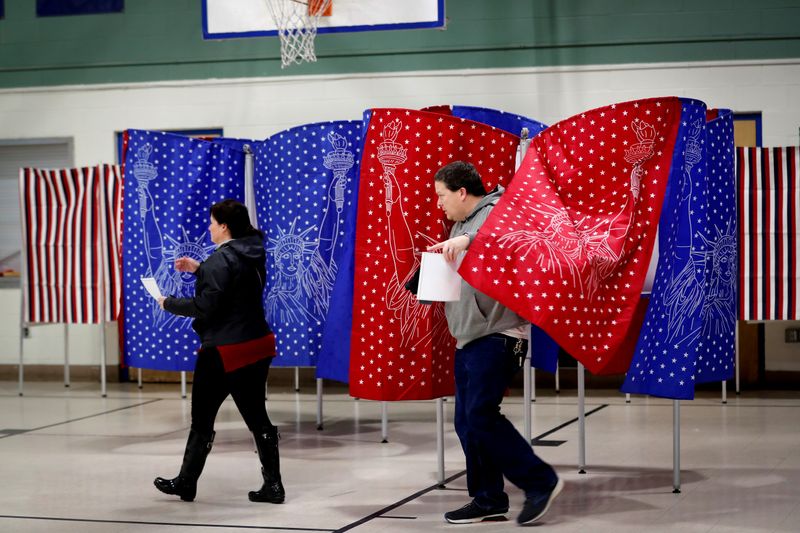 By Michael Martina and Tim McLaughlin

MANCHESTER/DIXVILLE NOTCH, N.H. - As the sun rose over New Hampshire, Democratic presidential hopefuls hit the streets as they faced a last chance on Tuesday to persuade the state's voters that they were the party's best bet to take on President Donald Trump in November.

U.S. Senator Elizabeth Warren of Massachusetts and former Vice President Joe Biden will also be angling for the support of voters who pack into schools, churches and city offices where ballots are cast.

New Hampshire is the second contest of the U.S. presidential nominating cycle, and while few votes are on offer, it gives candidates a chance to build momentum for their campaigns in a crowded field.

Here are some scenes from the campaign trail on Tuesday:

'THE ONE WHO CAN BEAT TRUMP'

The 38-year-old military veteran shook hands and took selfies with the enthusiastic crowd. Less than five minutes later, he headed back to an SUV, a walk slowed by the throng of media cameras surrounding him.

"It feels good out here," he said, smiling as reporters asked how he thought he would fare in Tuesday’s primary.

Voter Sara Lutat, 60, emerged from the school soon after, having cast her vote for Buttigieg.

"I think he's the one who can beat Trump," she said, adding that he was grounded and had progressive ideas but nothing "too far out there.

"Actually, I don't care who wins as long as he's not in the White House," Lutat said, referring to Trump. "I wish the Democratic Party would get it together. Otherwise, we're going to be stuck in limbo another four years. Frankly, it's too scary."

Rebecca Balzano, a 38-year-old cook at a local restaurant, called Buttigieg "too new, too young" and said she voted for Sanders.

"Everything he says, I'm all for," she said. "We need the Bern man in office."

Democratic voters in the state are faced with a lengthy ballot listing 33 names -- including top-tier candidates, former hopefuls who have already dropped out of the race and some contenders who never attained a national profile.

One name not on the list is former New York City Mayor Michael Bloomberg, a late entrant to the race who is skipping the first four contests.

That didn't stop voters in the mountain hamlet of Dixville Notch from picking the billionaire founder of the media company that bears his name as a write-in candidate when they voted just after midnight on Tuesday. He won three of the five ballots cast.

Les Otten, a registered Republican who is redeveloping the ski lodge where the vote took place, said he voted for Bloomberg because he is a moderate and his agenda addresses climate change and the ballooning federal budget deficit.