In political speech to Congress, Trump pokes at Democrats' divide on healthcare 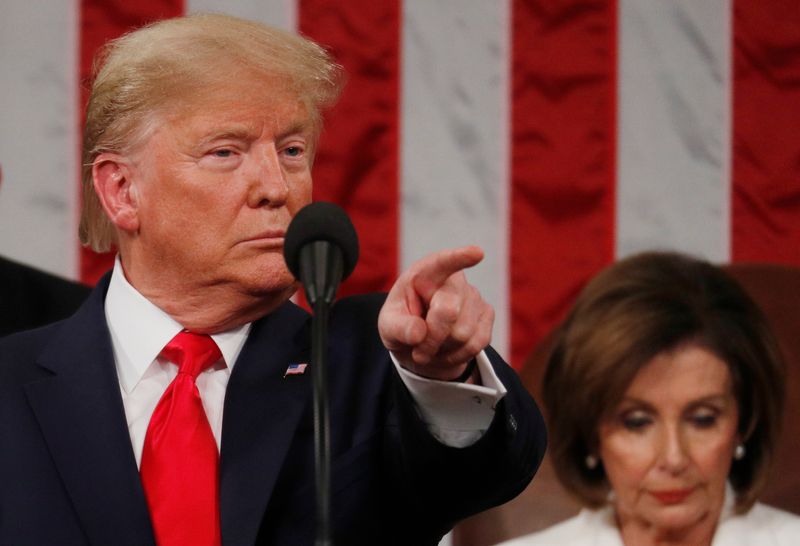 © Reuters. U.S. President Trump delivers State of the Union address at the U.S. Capitol in Washington

WASHINGTON (Reuters) - Democrats campaigned on healthcare when they won control of the U.S. House of Representatives in 2018. President Donald Trump made plain on Tuesday that he would try to use the issue to his advantage in the 2020 presidential election.

In the annual State of the Union speech, Trump promised to lower health costs for Americans and slammed Democratic plans as a "socialist takeover" that would bankrupt the country and cut benefits by providing care to illegal immigrants.

"I want you to know: We will never let socialism destroy American healthcare," he said.

The line drew loud applause from Trump's fellow Republicans in the House chamber.

Without naming them, Trump was referring to ambitious plans outlined by Democratic presidential candidates Bernie Sanders and Elizabeth Warren that would replace private health insurance with a government-run plan that covers all Americans, based on the Medicare program for older Americans.

Those proposals have divided Democrats seeking their party's presidential nomination to face Trump in the November election and have highlighted differences between the progressive and moderate sides of the party in an election year.

Trump signaled his intent to take advantage of the divide among Democrats and usurp their appeal on an issue that resonates with millions of Americans.

He accused Democrats of funding programs that would pay for healthcare for immigrants in the country illegally, at the expense of older Americans.

"If you believe that we should defend American patients and American seniors, then stand with me and pass legislation to prohibit free government healthcare for illegal aliens," he said.

Democrats do not intend to cede the issue to Trump.

When Trump said he would had a plan to lower drug costs, Democrats in the chamber responded by chanting: "H.R. 3," referring to their own cost-cutting legislation.

Democratic lawmakers invited some 80 doctors, patients and advocates to the State of the Union address as guests to highlight Trump's efforts to dismantle Obamacare.

Trump's Republicans tried unsuccessfully to repeal Obamacare in 2017 and his Justice Department is now backing an effort to dismantle the law in court.

"Democrats are trying to make your healthcare better," said Michigan Governor Gretchen Whitmer, who gave the Democratic Party's televised response. "Republicans in Washington are trying to take it away."