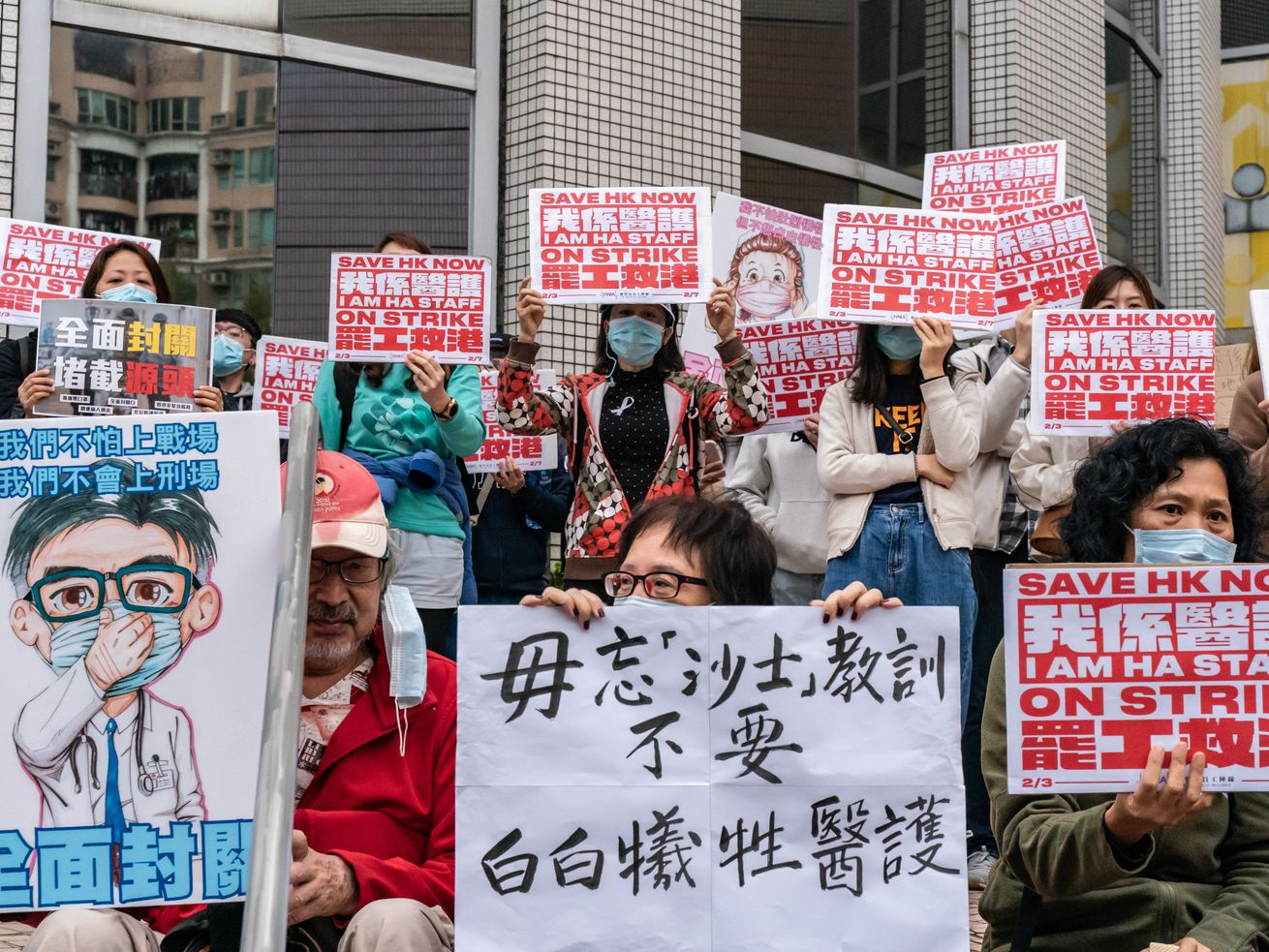 Coronavirus fears are transcending politics in Hong Kong and transforming the protest movement.

A 39-year-old man died this week from the coronavirus in Hong Kong, one of just two deaths that have occurred from the virus outside of mainland China.

The death, along with about two dozen confirmed cases of the virus in the city-state, is fueling fears in Hong Kong over the potential spread of the coronavirus from mainland China, where more than 28,000 cases have been reported so far.

But anger is also brewing at the government’s handling of the crisis — specifically its refusal to close Hong Kong’s borders.

Fury is being directed at one person in particular: Chief Executive Carrie Lam, who is facing widespread criticism for what many see as her failure to protect the public safety and health of Hongkongers.

Lam has resisted completely sealing off Hong Kong’s borders with mainland China, having closed all but three of Hong Kong’s 14 crossings. Lam has said that the “almost unique” relationship between Hong Kong and mainland China would make a total shutdown too disruptive and discriminatory. The government has also instituted a 14-day quarantine on all visitors from mainland China.

Lam has been under serious pressure for months, even before the coronavirus hit. She attempted to push through a controversial extradition bill in June that led to sustained protests in Hong Kong against the growing interference from Beijing in Hong Kong’s affairs. Lam withdrew the bill in September, but the pro-democracy demonstrations continued over the government’s response and the police’s treatment of protesters.

C.L., a 40-year-old drama teacher in Hong Kong I spoke with, told me he’s frustrated that Lam is keeping the doors wide open. “Look, I never thought I would say this, but Trump saying he would build a wall on the border — I kind of agree with him right now. That actually makes some fucking sense now, because our chief executive isn’t doing shit to protect our people.”

In Hong Kong, politics has intensified mistrust of government

Hong Kong’s pro-democracy protests have quieted down in recent weeks, in part because of arrests and injuries.

But the months of unrest have colored Hongkongers’ reactions to the coronavirus. Mass protests have intensified distrust of Lam’s government, especially among the pro-democracy activists and their supporters. Lam has close ties to Beijing, and her government’s crackdown on the demonstrators convinced protesters that China, not Lam, was making the decisions for Hong Kong.

Lam’s reluctance to take more proactive measures against China in the wake of the coronavirus has further hardened the opinion that she’s taking orders from Beijing, and doing so at the expense of Hongkongers.

“Many of us feel like Lam’s priority is Beijing’s government’s feelings, rather than the feelings of HK citizens,” Yvonne, a 28-year-old Hongkonger who works in media, told me via WhatsApp. “She didn’t make a prompt decision to stop the virus spreading in our city.”

The skepticism about Lam’s motives has also fueled a more general mistrust among Hongkongers that could make it harder for the government to deal with an emergency like the potential spread of the coronavirus.

“The way I see it, she just doesn’t have any control over the situation in Hong Kong; Beijing is actually controlling Hong Kong, and Carrie Lam is the puppet,” C.L. said. “There’s been conspiracy [theories] going around the reason why she doesn’t close borders.”

Hongkongers I spoke to, mostly via text or phone calls over encrypted messaging apps, cited multiple conspiracy theories that have taken hold. Some have suggested Lam might be using the coronavirus to punish Hongkongers for months of protests or to distract from the still-simmering anti-government sentiment. Another theory is that Lam is keeping the borders open so that Chinese officials can easily flee to the city.

Hong Kong — like the rest of the world — is also dealing with a face-mask shortage, and Hongkongers have criticized Lam’s lackluster response there, too. “We feel like Lam has done NOTHING to solve the problem of the lack of face masks,” Yvonne texted via WhatsApp. “Elderlies have to queue overnight [to buy] a box of face masks.”

Lam was criticized for instructing civil servants not to wear face masks unless they were visibly sick, insisting she wanted them saved for medical professionals. She later apologized, but some suspected that Lam had discouraged their use because the face masks had become such a prominent symbol of the protest movement.

The Hong Kong government is now allowing female inmates at the Lo Wu Correctional Institution to volunteer to make face masks in an effort to increase production, but questions remain on how those masks will be distributed. And some Hongkongers doubted Lam’s claims that masks were prioritized for health care workers, with reports that masks are going to groups and people who are notably pro-government.

This week, a rumor spread online that claimed Hong Kong would face an imminent toilet-paper shortage. It caused a massive run on bath tissue, leaving store shelves empty. One Hongkonger told me he believes pro-Beijing forces spread the misinformation online to trick Hongkongers into believing there would be supply shortages if the city sealed its borders with China.

This mistrust of the government makes it easy for misinformation to spread — all of which is exacerbated by genuine fears over the coronavirus.

Victoria Hui, an associate professor at the University of Notre Dame, told me there’s a new joke going around: that the coronavirus mutated and is now causing people to stop using their brains.

Unlike the pro-democracy protests, which have split the city into the “blue” (supporters of the police) and “yellow” (supporters of the protesters) camps, concerns over the coronavirus have transcended politics. As Samuel, a 37-year-old medical worker in Hong Kong, told me: “It doesn’t matter the political view.”

Hong Kong’s economy is also in recession, and many worry that the coronavirus will further isolate the city-state, deepening its economic woes. Businesses already struggling worry that even more people will stay home and that tourism and business travel to the territory will slow further, making the situation worse.

Hong Kong was hard hit by the SARS coronavirus in 2003, with nearly 300 Hongkongers killed. Citizens do not want a repeat with this new coronavirus, and it’s why even those who’d normally be sympathetic to Lam have opposed her measures.

“When it comes to politics, some people may understand and stand with you, but when it comes to heath, and when people can actually die from this — and also because Hong Kong went through SARS — this goes way beyond frustration,” Hui told me.

“People are angry,” she said.

The evolution of Hong Kong’s protest movement has made citizens better equipped to challenge the government’s policies on the coronavirus.

More than 6,000 hospital workers went on strike this week to protest Lam’s decision not to close Hong Kong’s borders. On Friday, the union finally agreed to end a week-long strike after it failed to generate enough votes to continue the stoppage into next week.

“It doesn’t mean we are giving up,” Winnie Yu Wai-ming, who leads the Hospital Authority Employees Alliance (HAEA), said Friday.

But before then, the strike had swelled to more than 6,000 workers and hundreds of doctors and nurses occupied some floors of the Hospital Authority, which manages Hong Kong’s hospitals.

This strike has its roots in the anti-government protests. The Hospital Authority Employees Alliance is a newly formed union that grew out of those demonstrations. As Timothy McLaughlin wrote in the Atlantic, “The sustained demonstrations have led to a surge of interest in organized labor: Numbers from the city’s labor department show that one dozen unions were established in the final two months of 2019, the HAEA among them.”

“This is why forming unions is such a big deal,” Hui told me. “To stay on the street is not the most effective way ... Organizing boycotts and strikes — these are actually the most powerful tools that any opposition movement can use,” she said.

Jason, a 30-year-old Hongkonger who works in financial services, told me that the health care workers strike adds to the pressure on Lam, and unlike the protests she can’t use police force or threaten anything other than their jobs. But he added, “I don’t know whether this changes anything in terms of administration at this point.”

So far, Lam hasn’t budged. That, of course, has merely intensified the outrage against her government. Fury, not fear, is what Hong Kongers are increasingly feeling about the coronavirus. As C.L. said, “You’re so angry, you don’t scare easy anymore.”