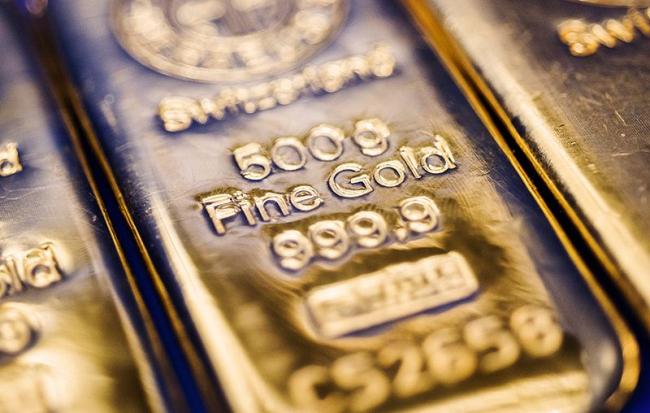 (Bloomberg) -- Investors are rushing to the safety of gold amid a selloff in U.S. stocks on mounting concerns the coronavirus outbreak will derail global growth.

Gold jumped as much as 2%, extending its climb to a seven-year high, as the S&P 500 Index headed for its first weekly loss since January. In a sign that the virus is starting to dent the world’s largest economy, business activity in the U.S. shrank in February for the first time since 2013 with the pandemic disrupting supply chains.

“The persistent, cold-blooded and measured shift in gold higher, despite the U.S. dollar, is telling,” Nicky Shiels, a metals strategist at Bank of Nova Scotia, said in emailed message. “The breakout is warranted and has legs.”

“Gold is in the midst of its perfect storm,” said Ole Hansen, head of commodity strategy at Saxo Bank A/S.

Prices of bullion in euros and Australian and Canadian dollars climbed to records. Holdings in gold-backed exchange traded funds climbed for 22 straight sessions through Thursday, the longest ever run, according to data compiled by Bloomberg.

This stretch of inflows “certainly gives an indication about concerns around the global economy,” Andrew Jamieson, global head of ETF product at Citigroup Inc (NYSE:C). in London, said in an interview with Bloomberg TV.

The outbreak has worsened outside of China, withcases in South Korea climbing past 200, while tallies for Singapore and Japan topped 85. Chinese authorities adjusted the number of cases for the third time this month, raising more questions over the reliability of the data.

In more than half of the world’s 20 biggest economies, analysts now expect looser budgets this year — in other words, bigger deficits or smaller surpluses — than they did six months ago, according to a Bloomberg survey of economist forecasts.

The Commonwealth Bank of Australia expects the Federal Reserve to ease twice in the second half of the year as the virus threatens the global economy.

Still, lower U.S. yields and weaker equities could push gold prices further toward $1,750 an ounce even if the coronavirus is contained during the first quarter, according to Goldman Sachs Group Inc (NYSE:GS).

If the outbreak stretches beyond that, “we see substantially more upside from here -- toward $1,850 an ounce, depending on the magnitude of the global monetary policy response,” the bank said in a note Friday.