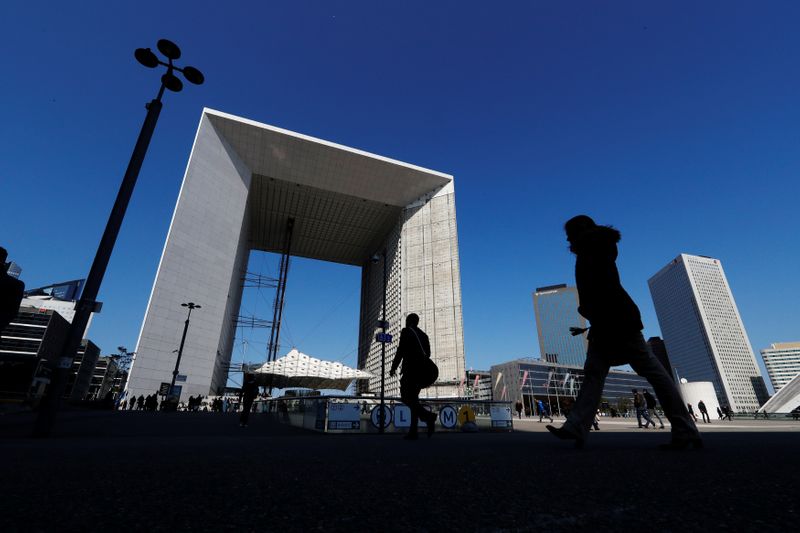 © Reuters. People walk near the Arche de la Defense in the financial and business district of La Defense, west of Paris

The unemployment rate fell to 8.1% in the final three months of last year from 8.5% in the third quarter, which was revised down from an initial reading of 8.6%, the INSEE statistics agency said.

The result brought the jobless rate to its lowest level since the fourth quarter of 2008. It far exceeded expectations for a rate of 8.5% on average in a Reuters poll of 11 economists, with none expecting anything lower than 8.4%.

The big drop will be a welcome development for Macron after he faced weeks of strikes over an overhaul of the pension system that was fiercely resisted by trade unions.

The fall in unemployment comes even though the economy contracted slightly in the final quarter, which economists mainly put down to the strikes hitting manufacturers' supply chains.

Despite the weak finish to the year, the French economy last year outperformed other big euro zone economies like Germany because it has a smaller exposure to exports and thus the slowdown in global trade.

With demand at home firm, French companies have steadily added to staff numbers, also emboldened by labor code changes under Macron that have made hiring and firing easier.

INSEE said that not only did joblessness fall but the number of people in jobs rose in the fourth quarter to its highest level since comparable records began in 2003.

The share of people on permanent labor contracts reached 49.3%. Along with the fourth quarter of 2018 when the same rate was reached, it was the highest since the third quarter of 2009.

The rate has risen since Macron's reform of the labor code, which economists say is because employers are less uneasy than in the past about putting people on permanent contracts that previously made it difficult to get rid of workers if business soured.