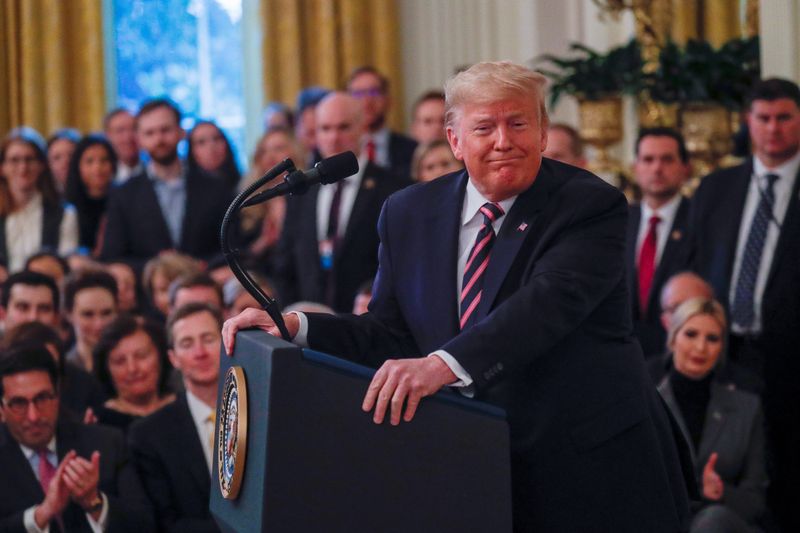 NEW YORK (Reuters) - Americans are evenly split, mostly along party lines, over the U.S. Senate's acquittal of President Donald Trump at his impeachment trial, even though more respondents than not think he probably did something wrong, according to a Reuters/Ipsos poll released on Thursday.

The national opinion poll found that 43% of U.S. adults supported the Republican-led Senate's decision on Wednesday to keep Trump in office in a case stemming from his dealings with Ukraine. Forty-one percent opposed the acquittal and 17% said they were undecided.

The results suggest that some respondents feel that even if Trump did something wrong, it was not enough to warrant his removal from office.

The survey of 1,006 adults was conducted after the Senate voted 52-48 to acquit Trump of abuse of power and 53-47 to acquit him of obstructing Congress.

The Republican president was impeached in December by the Democratic-led House of Representatives for abusing the powers of his office in pressuring Ukraine to investigate Joe Biden, who is seeking the Democratic nomination to face Trump in the Nov. 3 election, and for obstructing a congressional investigation of the matter.

Trump denied wrongdoing and denounced the impeachment process as illegitimate. The acquittal was his biggest victory yet over his foes in Congress, who had attacked Senate Republicans for refusing to call witnesses or seek new evidence at the trial.

Senator Mitt Romney was the only Republican to vote for conviction, on the abuse-of-power charge. No Democrat voted to acquit on either charge.

Like previous surveys, the poll showed a big split between Democrats and Republicans on the issue. Democrats largely favored removing Trump from office, while most Republicans supported his acquittal.

Although Democratic lawmakers fell far short of securing the two-thirds Senate majority needed for conviction, most Democrats appeared to be largely supportive of their party’s pursuit of impeachment.

Seventy-seven percent of Democrats agreed it was “the right thing to do,” despite the acquittal, and 67% agreed their party was right to try to impeach Trump “even if it ultimately weakens Democrats’ chances of winning the presidency in 2020.”

The Reuters/Ipsos poll was conducted online, in English, across the United States. It had a credibility interval, a measure of precision, of 4 percentage points for the entire sample and 6 points for measurements related specifically to Democrats or Republicans.