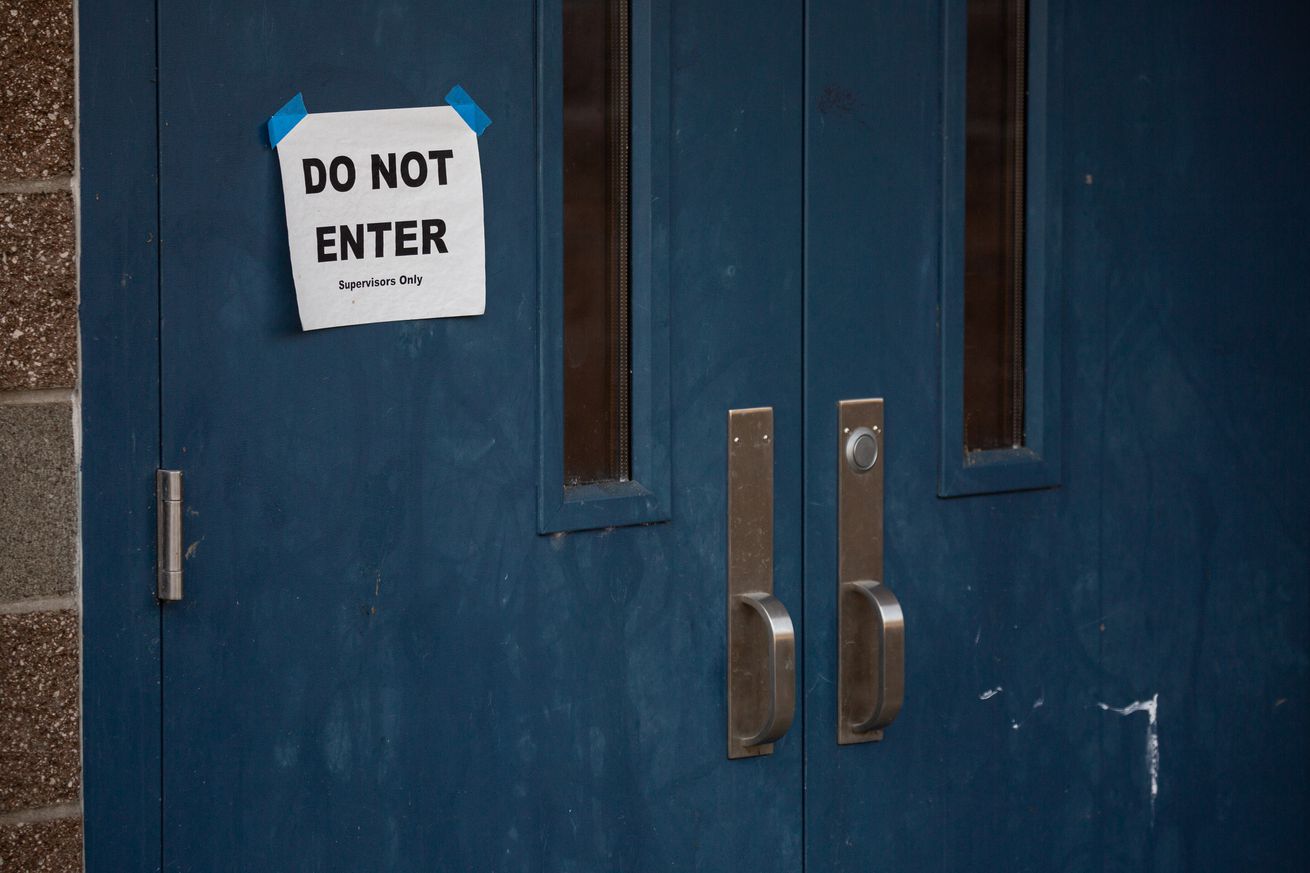 A do not enter sign has been taped to the door at Bothell High School in Bothell, Washington. It is closed for disinfection after a family member of a staffer was put in quarantine for possible coronavirus | Photo by David Ryder/Getty Images

A person in Washington state died after contracting the novel coronavirus, health authorities announced on Saturday. It is the first death attributed to the virus in the U.S. Officials also announced two new cases in Washington state linked to a long-term care facility, including the first confirmed case in a healthcare worker in the United States.

“We are dealing with an emergency evolving situation,” Amy Reynolds, of the Washington state health department, told the Associated Press. A spokesperson for EvergreenHealth Medical Center in King County, Washington confirmed to the AP that the patient died there. The patient who died was a man in his 50s with chronic underlying health conditions, Jeff Duchin, a health officer for Public Health, Seattle & King County said during a press conference today. It is not yet known how or when he contracted the virus.

The other two cases announced today were both linked to a long-term care facility in Washington state. One was a resident of the facility, a woman in her 70s who remains in serious condition. The other was a healthcare worker at the facility, a woman in her 40s, who officials say is in satisfactory condition. Of the 108 residents and 180 staff at the facility, 27 residents and 25 staff members have symptoms of the virus, Duchin said. Symptoms include a fever, cough, and shortness of breath. Testing to confirm whether or not those individuals have COVID-19 is underway.

Having an outbreak of the virus in a long-term nursing facility is particularly concerning for public health officials. “We are very concerned about an outbreak in a facility where there are many older people,” Duchin said. While most cases of COVID-19 are mild, elderly people and people with underlying health conditions are at greatest risk for severe symptoms of the virus.

The news of the death and the new cases comes one day after three new cases of coronavirus with unknown origin were reported in the United States. Before this week, the only confirmed cases of the virus in the country originated after a person traveled to an area of the world hard-hit by the disease, or developed after a person had close contact with a confirmed case. Cases with unknown origins are alarming to health authorities because their presence indicates that the disease is likely circulating within the population.

It is a sad day as we learn a Washingtonian has died from COVID-19. Our hearts go out to his family and friends.
We are strengthening our preparedness and response efforts to keep Washingtonians healthy, safe and informed.
Full statement: https://t.co/F3xn4afjG5 pic.twitter.com/yTG6omGcLI

“It is a sad day in our state as we learn that a Washingtonian has died from COVID-19. Our hearts go out to his family and friends,” Jay Inslee, the governor of Washington, said in a statement. “We will continue to work toward a day where no one dies from this virus.”

The virus, which causes the disease COVID-19, has spread to 57 countries around the world since it emerged in China in December. The respiratory disease has infected more than 85,000 people and killed more than 2,900. In the United States, 66 people with COVID-19 have been identified.

Until last week, the only people who were tested for the virus in the United States were people who had traveled to areas where the virus was circulating, or who had close contact with confirmed cases. After a public backlash against the Centers for Disease Control and Prevention’s testing restrictions, the testing criteria were expanded. After the expansion, more cases were swiftly identified.

Even before the announcement today of a healthcare worker with COVID-19, the healthcare industry has been bracing for the virus. In California, 124 nurses and other healthcare workers at UC Davis Hospital, have been told to quarantine themselves at home, a healthcare union said on Friday. Those workers are believed to have been exposed to the virus at the hospital, where one coronavirus patient sought treatment.

Officials are currently emphasizing the need for preparedness over panic in the United States. “While there is some spread in some communities there is no national spread of COVID-19 at this time,” Nancy Messonnier, director of CDC’s National Center for Immunization and Respiratory Disease said at a press conference today. Messonnier and Duchin both recommended that people take basic precautions to prevent the spread of illness. That includes staying home from work or school if you are sick, and washing your hands regularly.