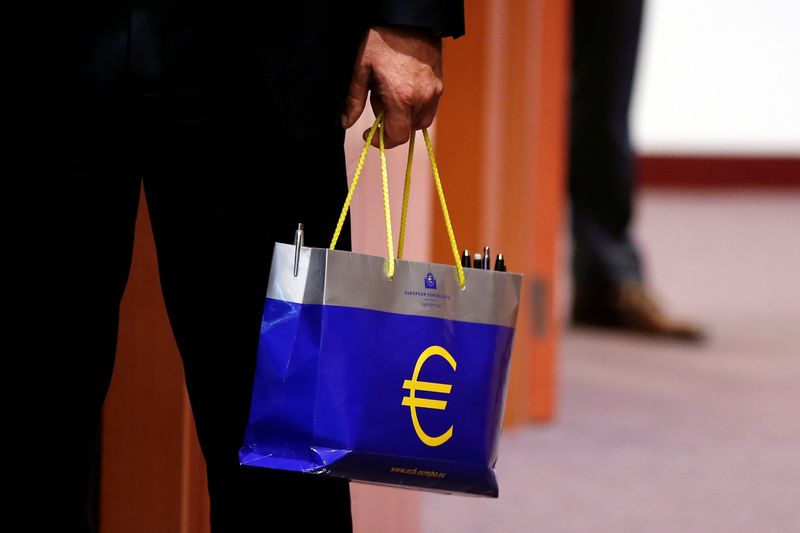 BRUSSELS (Reuters) - Euro zone finance ministers are set to agree this month a more growth-friendly fiscal policy, three EU officials said on Friday, a change from current targets that would pave the way for more spending in Germany amid fears of a downturn.

Repeated attempts to boost investment and growth in the 19-country bloc have failed in past years as Germany, the euro zone's largest economy, kept posting large budget surpluses despite calls to spend more.

But now, amid fresh recession fears in Germany and concerns about the impact on the global economy of the coronavirus outbreak in China, euro zone countries have reached a preliminary agreement to increase spending in the event of a downturn.

"If downside risks were to materialize, fiscal responses should be differentiated, aiming for a more supportive stance at the aggregate level," a draft text agreed by euro zone envoys said, according to an official who had access to it.

Other two senior EU officials confirmed the preliminary compromise, which needs to be formalized by euro zone finance ministers at a meeting in Brussels on Feb. 17.

The text, agreed after lengthy negotiations, stresses that higher spending would need to be compliant with EU fiscal rules which mandate a deficit below 3% of gross domestic product, among other requirements.

Despite its restrictions, the move would mark a departure from past statements in which euro zone ministers had recommended a "broadly neutral" fiscal stance, despite weak economic growth.

The change would allow governments with more solid finances to focus more on growth rather than stability as they begin planning for next year's national budgets.

It could also send a positive message to investors that the bloc is finally heeding calls from the European Central Bank to complement its loose monetary policy with a fiscal push that could make it more effective.

Germany has long insisted on keeping budgets under tight control in a bid to reduce imbalances in countries of the bloc with high levels of debt, like Italy or Greece.

But views in Berlin may be slowly changing after weak growth last year and concerns that in the last quarter Germany may have fallen into recession because of tumbling industry output.

Germany's Finance Minister Olaf Scholz has said in past months that Germany would loosen the purse strings in the event of an economic crisis, but despite last year's slowdown it has posted large budget surpluses in the first nine months, Eurostat figures released in January show.

The EU Commission will unveil on Thursday its quarterly forecasts for the euro zone economy and the figures will be discussed by ministers when they adopt the recommendation on the bloc's fiscal stance. That could help the case of those supporting more spending, an EU official said.