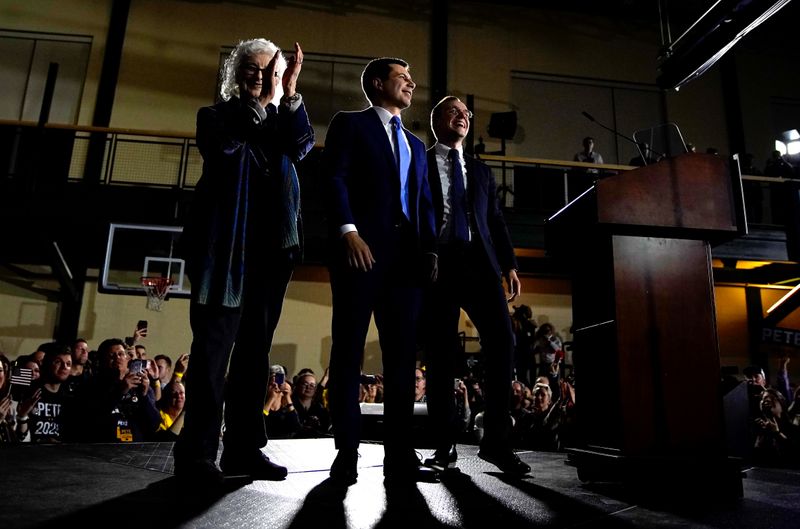 By John Whitesides and Amanda Becker

MANCHESTER, N.H. (Reuters) - Democrats vying for the right to challenge U.S. President Donald Trump turned their focus to Nevada and South Carolina after Bernie Sanders solidified his front-runner status with a narrow victory in New Hampshire, with Pete Buttigieg close behind him.

While Sanders, a U.S. senator from neighboring Vermont, and Buttigieg, a former mayor of South Bend, Indiana, finished first and second in Tuesday's New Hampshire primary respectively, the contest also showed the growing appeal of U.S. Senator Amy Klobuchar of Minnesota, who placed third after surging over the past few days.

Two Democrats whose fortunes have been fading - U.S. Senator Elizabeth Warren of Massachusetts and former Vice President Joe Biden - limped out of New Hampshire, finishing fourth and fifth respectively amid fresh questions about the viability of their candidacies.

New Hampshire was the second contest in the state-by-state battle to pick a Democratic nominee to face Trump, a Republican, in the Nov. 3 election. Sanders and Buttigieg finished in a virtual tie in the first contest last week in Iowa and won an equal number of delegates - who formally vote at the party's convention in July to select a nominee - in New Hampshire, according to early projections.

The campaign's focus now begins to shift to states more demographically diverse than the largely white and rural kickoff states of Iowa and New Hampshire. The next contest is on Feb. 22 in Nevada, where more than a quarter of the residents are Latino, followed a week later by South Carolina, where about a fourth are African-American.

After that, 14 states, including California and Texas, vote in the March 3 contests known as Super Tuesday, which will also be the first time voters see the name of former New York City Mayor Mike Bloomberg on the Democratic presidential ballot.

Democrats must decide whether their best choice to challenge Trump would be a moderate like Buttigieg, Klobuchar, Biden or Bloomberg - or a candidate further to the left like Sanders or Warren.

Only one of the candidates has public events planned on Wednesday. Bloomberg, a billionaire media mogul, plans rallies in Chattanooga and Nashville, Tennessee.

With an eye toward a potential general election campaign against Trump, Bloomberg on Wednesday announced the opening of a campaign office in New Hampshire headed by Democratic strategist Liz Purdy.

Bloomberg also picked up endorsements from three black members of the U.S. House of Representatives after he came under scrutiny over his past support for a policing tactic known as stop and frisk, which disproportionately affected racial minorities.

Buttigieg on Wednesday said his strong results in Iowa and New Hampshire showed he had momentum going forward, "settling the questions of whether we could build a campaign across age groups and different kinds of communities."

His campaign said it would double its organizing staff in Nevada to 100. Buttigieg also launched a new television ad in the state emphasizing his healthcare proposal that would provide access to a government-run Medicare plan but let people keep their private insurance if they want.

Buttigieg, who would be the first openly gay U.S. president if elected, still faces questions about what opinion polls show is his weakness with black voters, one of the most loyal and vital Democratic voting blocs.

Asked about how he could gain the confidence of racial minority voters, Buttigieg told MSNBC he was focused on economic empowerment and suggested he had learned lessons, sometimes "the hard way," as mayor of South Bend. He pointed to a plan he released last summer aimed at fighting racism.

"I think we're getting a whole new look from black and Latino voters who have so much riding on making sure that we defeat Donald Trump, because they are among those with most to lose if they have to endure yet another term of this president," Buttigieg told MSNBC.

In a sign of the growing rivalry between Sanders, 78, and Buttigieg, 38, supporters of the senator booed and chanted "Wall Street Pete!" when Buttigieg's post-primary speech was shown on screens.

"This victory here is the beginning of the end for Donald Trump," Sanders told supporters in Manchester, New Hampshire, late on Tuesday.

The Democratic field shrank to nine candidates after businessman Andrew Yang and U.S. Senator Michael Bennet, who had trailed in the polls and performed poorly on Tuesday, dropped out.

Biden, 77, was once the front-runner in the Democratic race, but stumbled to his second consecutive poor finish after placing fourth in Iowa. He is certain to face growing questions about his ability to consolidate moderate support against a surging Buttigieg and Klobuchar.

Klobuchar's campaign said it was spending more than $1 million on ads in Nevada.

"We have beaten the odds every step of the way," Klobuchar, 59, told supporters in Concord. "Because of you, we are taking this campaign to Nevada. We are going to South Carolina. And we are taking this message of unity to the country."

(Graphic: Calendar of each state’s Democratic nominating contest and its allocated delegates, https://graphics.reuters.com/USA-ELECTION-CALENDAR/0100B31F26V/index.html)