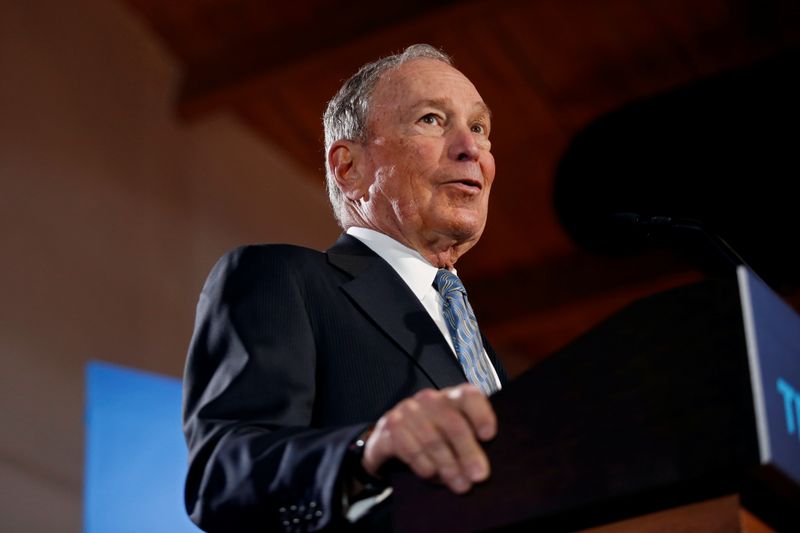 WASHINGTON (Reuters) - Two U.S. Democratic presidential candidates said on Sunday they would welcome the chance to square off against billionaire Michael Bloomberg if he qualifies for the next debate in Nevada.

Bloomberg, a media mogul who has vastly outspent his rivals in campaign advertisements, was a late entry into the 2020 Democratic race for a nominee to face Republican President Donald Trump in November. Bloomberg, 78, has not qualified for any presidential debates but will be included in Wednesday's event if he scores higher than 10% on one more public opinion poll.

"He just can't hide behind the airwaves," candidate and Minnesota Senator Amy Klobuchar said on NBC's "Meet the Press. "I can't beat him on the airwaves but I can beat him on the debate stage and I think people of America deserve that to make a decision."

Bloomberg’s campaign has faced accusations he made inappropriate comments toward women and that his company, Bloomberg LP, fostered a hostile environment for female employees.

His campaign has denied the allegations.

In a Jan. 15 interview with ABC's "The View," Bloomberg said his company, a major provider of news and financial information to Wall Street, has "very few" cases of sexual harassment given its large size, and said he thinks "most people would say we're a great place to work."

Former Vice President Joe Biden has said he would challenge Bloomberg over his support as mayor for a policing strategy known as "stop and frisk" that ensnared disproportionate numbers of blacks and Latinos.

"There's a lot to talk about with Michael Bloomberg. You all are going to start focusing on him ... like you have on me the last six months," Biden said on NBC, citing his position on issues relating to African Americans including stop and frisk.

Pete Buttigieg, the former mayor of South Bend, Indiana, was asked about the allegations against Bloomberg.

"I think he’s going to have to answer for that and speak to it," he told "Fox News Sunday."