Default Rocks the Argentine Brokers Who Sell Soy to the World 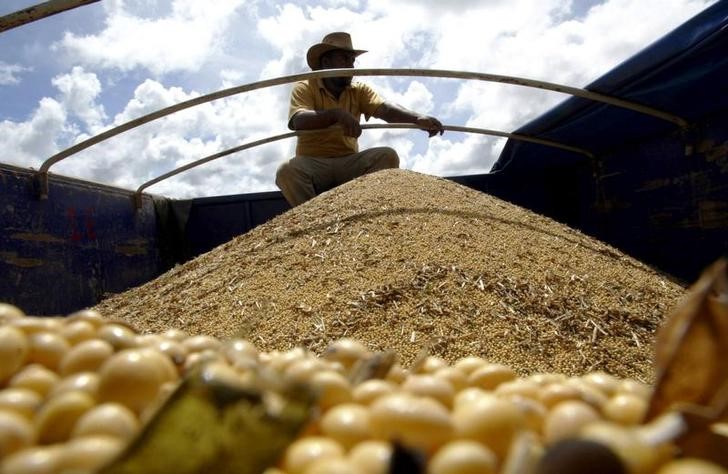 © Reuters. Default Rocks the Argentine Brokers Who Sell Soy to the World

(Bloomberg) -- In mid-August, Argentina’s farmers, en masse, ran out of patience. They wanted the cash they were owed and wanted it fast. Days earlier, leftist politician Alberto Fernandez had scored a resounding primary victory that made clear he’d win the October presidential election, and speculation was starting to swirl that he’d impose new taxes.

One after another, the farmers called their grains brokers to lock in prices on the soybean cargoes they had already turned over and collect the proceeds. This set off a wild scramble for cash in the community of brokerage houses that line the waterfront in Rosario, the port city that has long served as the grains trading hub for the world’s top soy-meal-producing nation.

It felt, some said, like a bank run. And in the end, it toppled one of Rosario’s biggest dealers. On Feb. 10, Vicentin SAIC, a 91-year-old firm specializing in exporting soy meal and oil, filed for bankruptcy, saying it could not meet a $350 million payment owed to suppliers and that it would seek to restructure $1 billion in debt.

Vicentin’s woes have quickly rippled across the waterfront as brokers including BLD SA and Guardati Torti SA said they couldn’t meet obligations. It’s also threatening to further hamstring the soybean industry, an engine of the sputtering Argentine economy. The default is the biggest by a company here since 2001, when a crippling recession prompted the government to declare a debt moratorium, and it ominously foreshadows yet another national debacle -- Fernandez has made it clear that he will soon ask foreign creditors for debt relief.

Few in Rosario were willing to speak about Vicentin’s plight on the record -- the dealer community is too tightly knit to allow such loose chatter -- but the overwhelming sentiment this past week was a desire to see the company survive and pay back its debts. “The whole industry needs Vicentin to stay in business,” said Mariano Grynblat, a farmer and broker who’s trying to recoup $3.2 million of his clients’ money and his own.

There was also lots of head-scratching about how the firm had managed to get into such a mess. The answer, according to a dozen interviews with grain brokers, traders, lawyers and board-of-trade insiders in Rosario, is through an aggressive expansion that the firm accelerated when Mauricio Macri, a free-market reformer who supported the farming industry, entered the presidential palace in 2015. It left the company financially exposed when the boom went bust, as it always seems to in Argentina.

And much of that expansion was made possible by a uniquely Argentine financial mechanism -- the delayed-price contract, as it is called, that allowed Vicentin to receive all those soy shipments from farmers without paying a penny up front.

Vicentin began with brothers operating a grain silo in Avellaneda, a small town of Italian immigrants in the province of Santa Fe. As the crop industry grew, Vicentin flourished and moved south down the Parana River toward Rosario. It built the world’s biggest crushing plant a decade ago in a joint venture with Swiss commodities giant Glencore (LON:GLEN) Plc, and branched out to beef, dairy and wines with names like ‘The Cheat’ and ‘The Bootlegger.’

To pay for it, the company leaned on both the suppliers, who got more time from contracts with Vicentin than its rivals to decide on a price they’d be owed, and lenders, which are owed about $1 billion now. One bank has drawn particular scrutiny: state-owned Banco Nacion. Lending to Vicentin spiked between August and December, when the bank was still under the direction of leaders named by the outgoing President Macri, exceeding the bank’s limits and raising red flags, according to the new bank spokesman Sergio Resumil. An internal audit is now underway.

Separately, a public prosecutor has opened a preliminary investigation into whether laws were broken in the lending process. The bank will cooperate with the probe, Resumil said. Vicentin has defended its relationship with Banco Nacion, saying its borrowing was above-board.

The company declined to comment specifically on the contracts’ pricing horizons. A Vicentin official who declined to be cited by name under company policy said that expansion was preferable to stagnation and the consequences of losing market share.

Vicentin had cozied up to Macri and was the biggest private-sector donor to his failed re-election campaign, giving about 10% of all private contributions through three affiliates, according to government data.

Under Macri, Banco Nacion lent heavily to Vicentin even before the surge that began in August. But with Fernandez in power, the bank is taking a much harder line. Resumil said the bank is working to recover its loans fully, not to seize assets, and is considering allowing more time for repayment, up to 10 years.

For many, the crisis recalls the downfall of another Argentine crop exporter at the turn of the century. Productos Sudamericanos eventually went under, its assets snapped up in large part by Cargill Inc.

Vicentin’s reach is much wider and market players in Rosario say there’s too much at stake for them if the company collapses. With production mostly halted as Vicentin negotiates paying back suppliers, the toughest task immediately will be to convince farmers and grain elevators, where crops are stockpiled, to keep trading with the company as Argentina heads for a second consecutive bumper harvest.

Vicentin is pressing suppliers to accept an out-of-court deal, offering to pay 20% of the debt now and the rest in installments if they keep dealing with the company. That would mean farmers get 60% of their money within three years, according to the Vicentin official. Grynblat, the farmer and broker whose clients are owed millions by Vicentin, said he’ll take that deal rather risk waiting years in the bankruptcy process.

How Vicentin will come up with the first 20% payment for those who take the offer is unclear, though.