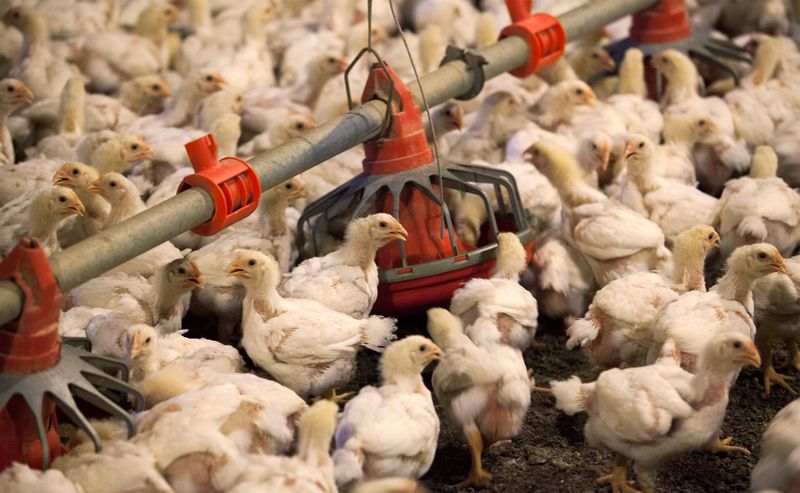 BEIJING (Reuters) - China has approved the import of all poultry products from the United States, the Ministry of Agriculture and Rural Affairs said on its website on Monday, including breeding birds in addition to poultry meat approved late last year.

Beijing had banned all trade in poultry products from the United States since 2015 due to outbreaks of avian influenza there.

But it lifted the ban on poultry meat imports in November 2019 as a concession to the United States ahead of finalizing a limited trade deal.

The new announcement would also allow for the import of live birds, said Li Jinghui of the China Poultry Association, benefiting companies including Aviagen [EWESJA.UL] and Cobb-Vantress Inc, both based in the United States and among the world's biggest poultry breeding companies.

Nobody at the China offices of Aviagen or Cobb could immediately be reached by phone.

Imports of live poultry from the U.S. were worth $38.7 million in 2013, dwarfed by other poultry products such as chicken feet.

However, the U.S. ban had a significant impact on China's poultry producers, who needed the breeders to replenish their stock.

Opening up imports of live birds again is part of the trade deal, said Li, although he added that it may not have a major impact.

Both Aviagen and Cobb have increased production of their birds, known as 'grandparent stock', in other locations such as New Zealand to meet demand from China.

China is the world's second-largest poultry producer and has been ramping up output to fill a huge meat shortage after a disease epidemic decimated its pig herd.

But prices have plunged in recent weeks because of measures taken by Beijing to tackle a coronavirus outbreak that has killed more than 1,700 people.

Restrictions on moving livestock and extended holidays in many areas have paralyzed the supply chain, leaving farmers stuck with large inventories of birds and eggs and slashing demand as restaurants and canteens stay shut.

Containers of frozen chicken feet from the U.S. have also been caught up in the logistics logjam, with many diverted away from China because of a lack of capacity to store additional cargoes.