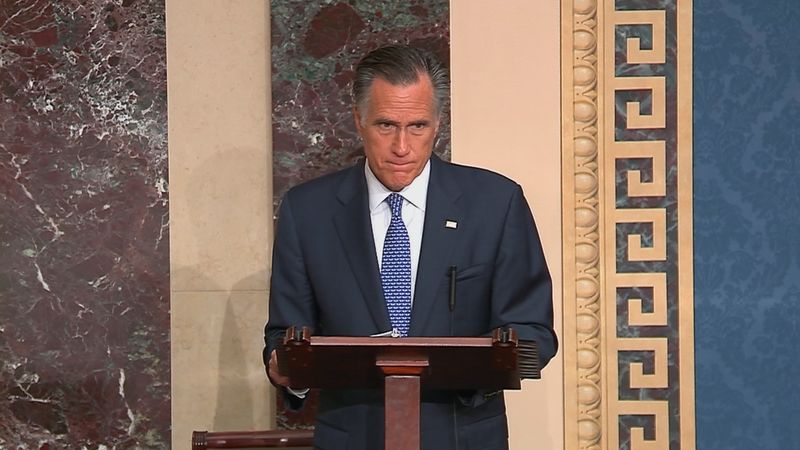 WASHINGTON (Reuters) - Republican Senator Mitt Romney issued a scathing criticism of Donald Trump on Wednesday as he broke with his party and voted to convict the U.S. president for abuse of power in his impeachment trial.

Romney was the only lawmaker to break with his party as the Senate acquitted Trump on impeachment charges stemming from his efforts to pressure Ukraine to investigate Joe Biden, the former vice president seeking the Democratic nomination to face Trump in the Nov. 3 election.

"Corrupting an election to keep one's self in office is perhaps the most abusive and destructive violation of one's oath of office that I can imagine," Romney said in an emotional speech on the Senate floor.

Romney voted 'guilty' on the first impeachment charge, abuse of power, siding with the Senate's 45 Democrats and two independents. He voted 'not guilty' on the second charge, obstruction of Congress.

He is the first senator in U.S. history to vote to convict a member of his own party in an impeachment trial. President Bill Clinton was acquitted in 1999 and Andrew Johnson in 1868.

Romney was the Republican presidential nominee in 2012 and was elected to represent Utah in the Senate in 2018.

Following the vote, Trump released a video that referred to Romney as a "Democrat secret asset" and noted his 2012 loss to Democratic President Barack Obama.

Other Republican officials, including the head of the Utah state party and Republican National Committee chairwoman Ronna McDaniel - Romney's niece - said they disagreed with his choice.

But fellow Senate Republicans declined to criticize him.

"I think Mitt’s a person of integrity," Senator Ron Johnson told reporters. "He voted his conscience."

A former governor of Massachusetts, Romney won his 2018 Senate election with a comfortable 63 percent. Up for re-election in 2024, he could conceivably face a primary challenge in Utah.

Some of his constituents came to his defense on Wednesday.

"I'm proud of him for speaking up," said Stacey Maxwell, a registered independent who owns a Salt Lake City coffee shop.

At the start of his floor speech, Romney appeared to choke back tears when he noted that as a Mormon, "I am profoundly religious. My faith is at the heart of who I am."

Romney, 72, served as a missionary in France as a young man and served as a church leader when he lived in Boston. He has generally downplayed his faith in his political career.

"The president is guilty of an appalling abuse of public trust," Romney declared.

Referring to Trump's contention that he has conducted himself in a "perfect" manner, Romney said, "What he did was not perfect. No, it was a flagrant assault on our electoral rights, our national security and our fundamental values."

This was not the first time Romney and Trump have tangled.

In a tweet last year, the president called Romney a "pompous ass" after he criticized Trump for urging Ukraine to investigate Biden.

Romney criticized Trump as a "fraud" during the 2016 presidential campaign, but met with Trump after his victory as he was looking to fill top administration jobs. Trump ended up not hiring Romney for any position.