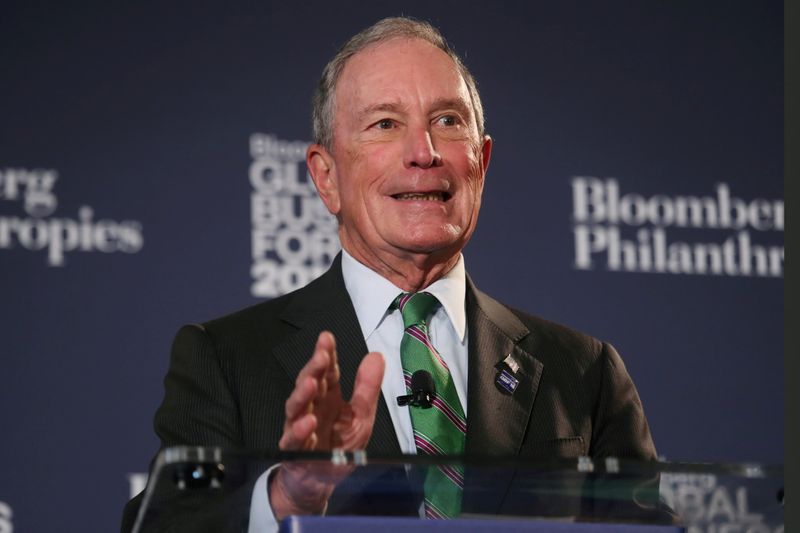 By Michelle Price and Pete Schroeder

WASHINGTON (Reuters) - Presidential candidate Michael Bloomberg's decision to back a tax on trades marks a blow for Wall Street lobbyists which had seen the moderate Democrat as a potential ally, said analysts and lobbyists.

On Tuesday, the former New York mayor and Wall Street investment banker, who made his $60 billion fortune in finance, proposed imposing a 0.1% tax on trading stocks, bonds and derivatives as part of a broader financial services agenda.

Bloomberg's decision to back the tax is likely to bring him into conflict with Wall Street firms that are fighting the policy, many of which are the very same clients that helped him make the fortune with which he is funding his campaign.

A spokeswoman for Bloomberg did not immediately provide comment. Bloomberg, who was a Republican, has said he would sell his eponymous Bloomberg Inc financial data company, whose trading terminal is widely used on Wall Street, if he wins the presidency.

"It is notable that a candidate who bills himself as a centrist businessman has moved so far left," said Brian Gardner, a managing director at brokerage Keefe, Bruyette & Woods in an analyst note. He added that Bloomberg's decision to endorse the tax meant it had become a more mainstream idea in Democratic circles. "It is likely to stay in headlines beyond the 2020 election."

Long seen as a radical non-starter, a trading tax has gained momentum due to the rise of progressive firebrands including Senators Bernie Sanders and Elizabeth Warren who have pledged to fund social policies with a "tax on Wall Street."

A Reuters/Ipsos poll released Tuesday put Sanders in the lead among Democratic and independent voters, with Bloomberg in second, Biden in third, Buttigieg in fourth and Warren in fifth.

That leaves Wall Street with few obvious allies on an issue that some firms regard as an existential threat. Depending on the structure of a tax, it could badly wound hedge funds and high-speed traders which profit by slicing tiny margins off millions of trades a day, according to academics.

For example, high-speed traders in France experienced a 30% reduction in trading volumes as a result of a 2012 transaction tax, according to a 2017 Journal of Finance study.

"I see it as a not-so-subtle attempt to show that Bloomberg the candidate is not afraid to hurt the clients of Bloomberg the business in order to appeal to Democratic voters."

Alarmed by its traction, the Securities Industry and Financial Markets Association (SIFMA), the U.S. Chamber of Commerce, and the Modern Markets Initiative (MMI) are lobbying against the tax.

In addition to the rhetoric coming from the Democratic candidates, lobbyists note there are four bills pending in Congress that seek to impose a transaction tax of some type.

Kirsten Wegner, CEO of MMI, said advocates of the policy were wrong to frame it as a tax on the wealthy. MMI advocates on behalf of high-speed trading firms.

"It would be paid by all Americans invested directly or indirectly in the markets and not just the wealthy," she said in an email.