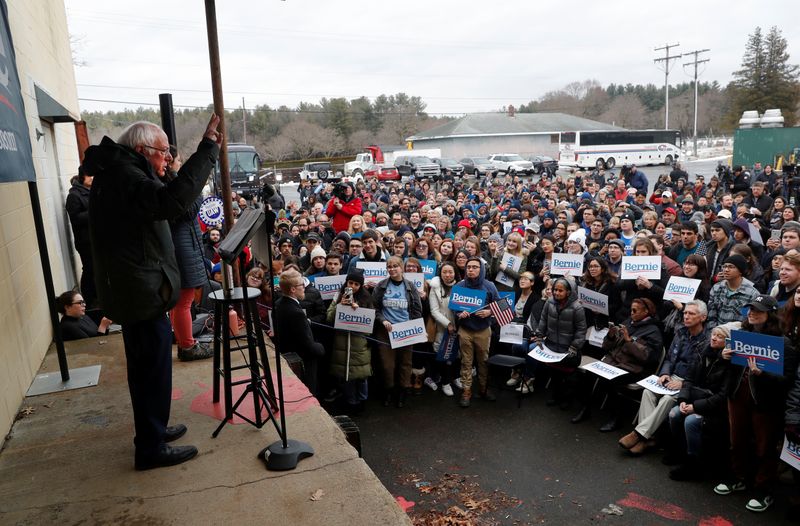 NEW YORK (Reuters) - Support for Joe Biden's U.S. Democratic presidential bid has tumbled nationally to the lowest on record since his lackluster finish in the Iowa caucuses, while interest is surging in the upstart candidacy of billionaire media mogul Michael Bloomberg, according to a Reuters/Ipsos poll released on Monday.

The opinion poll taken from Thursday to Monday found that 17% of registered Democrats and independents said they would vote for Biden, down 5 percentage points from a similar poll that ran last week before Iowa held its first-in-the-nation nominating contest.

That level of support was the lowest recorded for Biden by the Reuters/Ipsos poll since the former vice president entered the race last April to challenge Republican President Donald Trump in this November's election.

U.S. Senator Bernie Sanders led all other candidates in the poll with 20% support, up a point from last week, while 15% supported Bloomberg, the former New York mayor, an increase of 6 points.

The poll underscores what has been a steady decline in support for Biden, who was considered until recently the favorite to win the party's nomination.

Biden's primary appeal to voters has been his argument that he is the most electable of all of the candidates. Yet he finished in fourth place in Iowa, behind Buttigieg, Sanders, and Warren. The Reuters/Ipsos poll showed that Democrats and independents were now just as likely to believe that Sanders can win the Nov. 3 election as they are Biden.

When asked which candidate was "most likely to beat President Trump," 21% picked Biden, down 9 points from last week. Another 21% said Sanders had the best chances to win, and 15% said Bloomberg.

Bloomberg, who has not participated in the nationally televised debates and will not be on the ballot in many of the early statewide nominating contests, has instead banked his candidacy on his comparatively strong name recognition and millions of dollars of personal spending on campaign advertising.

The Reuters/Ipsos poll was conducted online, in English, throughout the United States. It gathered responses from 952 registered voters, including 556 who identified as Democrats or independents. The poll had a credibility interval, a measure of precision, of about 5 percentage points.