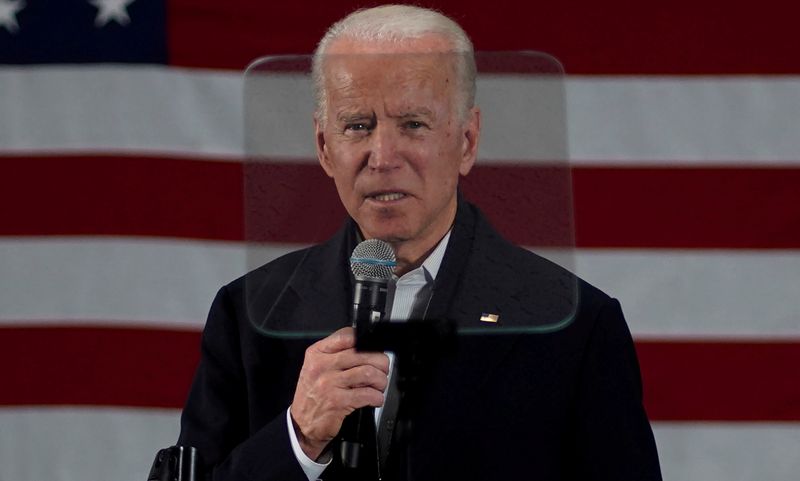 © Reuters. FILE PHOTO: Democratic presidential candidate and former Vice President Joe Biden is framed by a teleprompter screen as he speaks at a campaign event in Concord

The endorsement comes at a critical moment for Biden, whose possible fourth-place finish in Monday's Iowa caucuses could reshuffle a race where he has been leading in national opinion polls.

Biden held a campaign event at an IBEW branch on Tuesday in New Hampshire, which holds Democrats' next contest on Feb. 11. Iowa's Democratic Party still had not released a final tally of their first-in-the-nation contest to pick Republican President Donald Trump's opponent in the November election.

The IBEW's backing could help the politician who calls himself "Middle-Class Joe." Unions are a source of power for Democrats, influencing members' votes and providing volunteers.

But many labor groups decided to avoid wading into a primary dividing members between the party's more progressive and moderate camps. Some rank-and-file workers have been attracted to Trump, who has slashed regulations on fading blue-collar industries like coal and presided over the longest recorded U.S. economic expansion.

The IBEW's endorsement stands in contrast to their neutrality in the last competitive Democratic primaries, 2008 and 2016. In both cases they endorsed the Democrat over the Republican alternative only after Barack Obama and Hillary Clinton appeared to be their party's likely nominees.

IBEW International President Lonnie Stephenson described "an urgency this year" to pick a candidate aligned with their values.

One key issue: the stance of Democratic candidates on climate change and the environment. Senator Bernie Sanders of Vermont and other candidates would ban fracking, a natural gas extraction method and source of jobs for IBEW members.

"Joe Biden has listened to IBEW members," Stephenson said in a statement http://www.ibew.org/media-center/Articles/20Daily/2002/200205_IBEW-Endorses-Joe-Biden-for-President. "Eighty-five percent of IBEW members work in the energy industry, and our country needs a realistic plan to combat the ongoing threat of climate change without putting energy security or working families at risk."

Biden, who does not support a fracking ban, has called for spending $1.3 trillion over a decade on electric-car charging stations, high-speed railroads, clean-energy research and other infrastructure that could limit the effects of climate change.

Other candidates have union backing, too. Sanders, for instance, is supported by the SEA/SEIU Local 1984 public- and private-sector workers union, which has more than 10,000 members in New Hampshire.