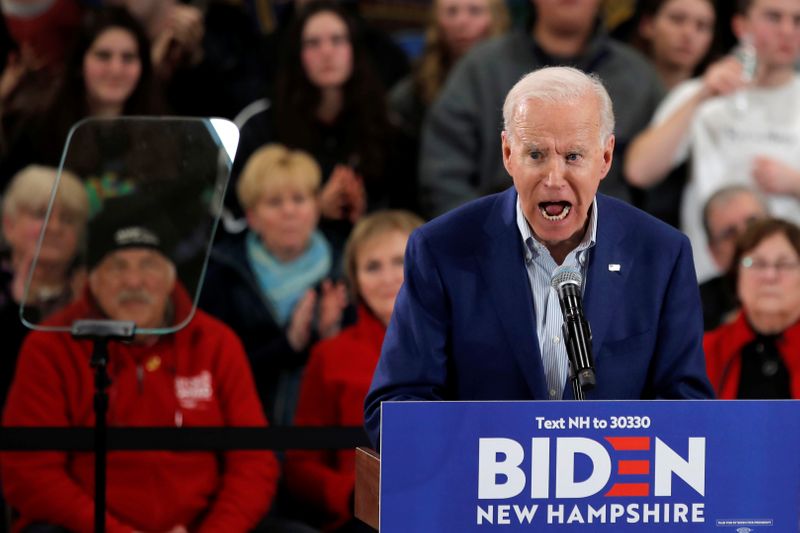 By Trevor Hunnicutt and James Oliphant

HAMPTON, N.H. (Reuters) - Joe Biden had spent much of the weekend ahead of New Hampshire's primary on Tuesday attacking his top Democratic presidential rivals when a young woman asked why voters should believe he could win a national election after his poor showing in Iowa.

What happened next quickly went viral.

The former vice president asked if she had ever been to a caucus. She said yes.

"No, you haven't. You're a lying dog-faced pony soldier," Biden said, smiling. "Now you gotta be honest. I'm going to be honest with you."

It was classic Biden, making a joke with phrasing adapted from John Wayne movies and drawing laughter from his audience. But some observers in the crowd and watching from the outside found the answer perplexing and even insulting.

Since he joined the Democratic race last spring to challenge Republican President Donald Trump in the November 2020 election, Biden has won over voters with tender moments that brought them to tears, while also showing flashes of anger that sent others looking for someone else to support.

The unpredictable performance has again been on display in New Hampshire, where the once-dominant national front-runner arrived after a disappointing fourth-place finish in Iowa last week. He immediately predicted he might suffer another weak finish in Tuesday's primary.

Biden, 77, is not shy about how he feels. "No one ever doubts that I mean what I say," he has said. "The problem is, I sometimes say all that I mean."

He lingers after campaign events, greeting everyone who wants to snap a photograph. He connects with people who speak about their setbacks in life, chronic health conditions or relatives who died, sometimes offering a private phone number if they wished to talk further.

Those who confront him see a different side. Biden called one Iowa voter "a damn liar" after he made false allegations against Biden and his son's actions in Ukraine. He pressed his palm into the chest of a critical Iowa activist last month and said: "Go vote for someone else."

'HOW MUCH FIRE IS THERE'

When an activist demanded at a November campaign stop in South Carolina that Biden stop deportations, Biden shot back: "You should vote for Trump." The activist, Carlos E. Rojas Rodriguez, said later he would join Sanders' presidential campaign.

"Is this some sort of reverse psychology strategy?" Rojas asked on Facebook (NASDAQ:FB) after Biden's subsequent confrontation with the Iowa activist.

Afterward, Biden held a wide-ranging back-and-forth with reporters that his staff repeatedly tried to end.

He criticized the Democratic debate format, boasting of his past debate performances against former Republican vice presidential candidates Paul Ryan and "that woman from Alaska who could see Russia," Sarah Palin.

He even offered that he did not really want to attack Buttigieg and Sanders, and blamed the press for making him do it. "You all judge on how much fire is there," he complained.

At an event in Hudson, New Hampshire, on Sunday, Biden ignored his talking points and spoke at length about the hardships he and other Americans have faced, almost breaking down when talking about the 2015 death of his eldest son, Beau, from brain cancer.

After the event, a formerly undecided voter said Biden had just won his support.

"This just had me from the beginning," said Charles Feiner, 67. "I've been to hundreds of these things. ... He really touched me."

Unfortunately for Biden, Feiner lives in New Jersey and will not be voting on Tuesday.