Home Politics As Warren aims for Super Tuesday rebound, will she alter her plan?

As Warren aims for Super Tuesday rebound, will she alter her plan? 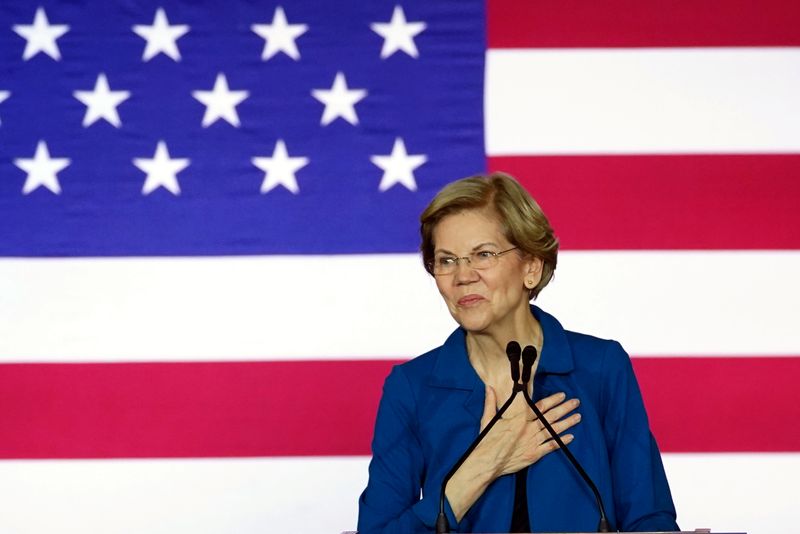 By Amanda Becker and Joseph Ax

Then Warren walked away with none from New Hampshire.

It was a stinging tumble for the U.S. senator from Massachusetts, who as recently as September led polls in the state that neighbors her own. Coupled with a third-place finish in Iowa, the candidate best known for having a plan for everything now faces pressure to recalibrate on the fly to remain competitive.

The Democratic contest to pick a candidate to take on President Donald Trump in November moves on to Nevada and South Carolina later this month, followed by 14 states on March 3's "Super Tuesday," a critical juncture for Warren.

With more than 1,000 staff across 31 states, she controls the most extensive campaign infrastructure of any candidate aside from former New York City Mayor Mike Bloomberg, who skipped the early states and is dumping millions into Super Tuesday advertising.

"Warren is playing in so many states, with so much staff, that it’s like running an aircraft carrier. That requires a lot cash," said a senior adviser for Senator Amy Klobuchar, who placed third in New Hampshire and is now rushing to build out her own national campaign.

Warren, who will campaign in the Super Tuesday state of Virginia on Thursday, has spent the last month casting herself as a "unity" candidate uniquely positioned among her competitors to appeal to both the progressive and moderate wings of a divided party.

But she placed fourth in New Hampshire and has found herself trailing rivals among voters of all stripes. Sanders has consolidated liberal voters, while former South Bend, Indiana, Mayor Pete Buttigieg has emerged from the early-voting states as the leading moderate alternative. Klobuchar cut into Warren's base of college-educated women to surge well ahead of Warren in New Hampshire.

"The thing that makes (Warren) such a great candidate, that she can unite the party, is also what makes it hard for her to stand out in this big of a primary, since everyone else can nibble away at her support," said Jacqueline Chretien, a New Hampshire lawmaker who endorsed Warren.

A NEED TO DIFFERENTIATE

Warren has shown reluctance to criticize her fellow Democrats, though she has regularly noted her refusal to court big-ticket donors.

“I have laid out what my policies are, and they're not the same as everyone else’s,” she told reporters on Monday when asked why she doesn't try to draw more contrasts with rivals.

A day later, she argued those who attack each other are "willing to burn down the party to be the last man standing."

Allies, however, have urged Warren to make a more forceful argument for why she is the best choice.

One Democratic strategist close to Warren's campaign pointed to Klobuchar's debate performance last week, when the Minnesota senator questioned Sanders' appeal as a democratic socialist and Buttigieg's track record as a mayor.

Warren "needs to differentiate and contrast with all the candidates because that's how voters are interpreting strength, which bolsters her electability argument," said the strategist.

It remains unclear whether Warren will embrace a shift in strategy. Even in trying times - whether it was a senior staff departure after her early pledge to swear off high-dollar fundraising or criticism of her Medicare for All proposal - Warren's campaign has neither evinced signs of panic nor dramatically retooled its approach.

LGBTQI activist and Warren supporter Preston Mitchum in Maryland said it would be a "disservice" to consider Warren unable to rebound.

"While some people may be disappointed, and I get it...we have so many states that are still coming up where we can see many successes," he said.