Home World News Alexander Vindman, a key impeachment witness, will be transferred out of the White House

Alexander Vindman, a key impeachment witness, will be transferred out of the White House 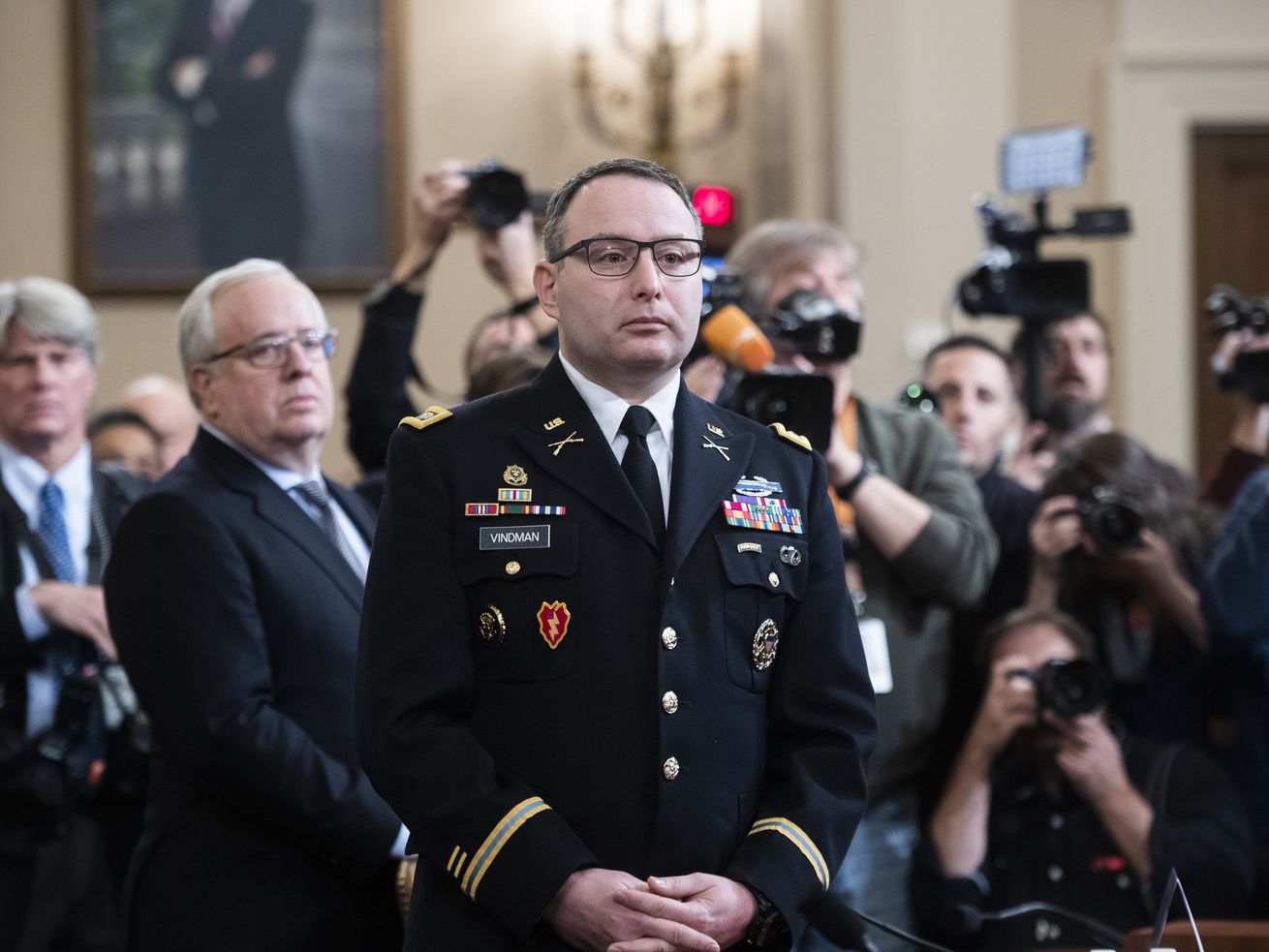 The move comes as President Trump declares victory for his “total acquittal.”

“Do not worry. I will be fine for telling the truth,” Lt. Col. Alexander Vindman testified in November, during the House’s impeachment inquiry into President Donald Trump’s pressure campaign against Ukraine.

But now that the Senate has delivered the president “total acquittal” on two articles of impeachment, a triumphant Trump is apparently seeking vengeance. And Lt. Col. Vindman is reportedly his first target.

Vindman, a top Ukraine expert on the National Security Council, listened in on Trump’s July 25 call with Ukrainian President Volodymyr Zelensky. He testified that he found the call inappropriate and that he saw it as “improper for the president of the United States to demand a foreign government investigate a U.S. citizen and political opponent.”

Now Vindman could be removed from his post in the White House as early as this Friday, according to a report in the Washington Post. He will reportedly be detailed to the Department of Defense. Trump, when asked about Vindman’s status on Friday, told reporters, “they’ll be making that decision.”

Vindman’s posting was expected to end this summer, though he reportedly told senior NSC officials that he would end his tenure in the White House earlier than expected.

Even so, the move is symbolic of a president who has made it clear — including in his statement-turned-political-diatribe on Thursday — that he is not in a forgiving mood.

“It was evil, it was corrupt, it was dirty cops, it was leakers and liars, and this should never, ever happen to another president, ever,” Trump said Thursday of the impeachment inquiry, in his hour-plus statement.

Bloomberg reports that the White House is framing this not as payback against Vindman but as a broader shrinking of the NSC staff. But, given the timing after Trump’s acquittal, the move certainly looks, at best, to be an attempt to close ranks and root out those who might be perceived as being insufficiently loyal to the president. In other words, no more leakers.

Vindman’s testimony in the House’s impeachment inquiry was some of the most damning against the president.

Though Vindman did not interact with Trump directly, he attended a meeting on July 10 between Ukrainian and White House officials, where he said EU Ambassador Gordon Sondland brought up investigations into Joe Biden’s son Hunter, and the 2016 election, in exchange for a meeting between Trump and Zelensky.

Vindman also listened in on the July 25 call, when Trump asked Zelensky to “do us a favor though” and look into the Bidens and mentioned a conspiracy theory that Ukraine, not Russia, interfered in the 2016 election.

Vindman’s testimony was also seen as something that could get bipartisan attention, given his exemplary public service. He is an immigrant who fled the former Soviet Union as a kid, and he served in the US military, where he earned a Purple Heart after being injured by a roadside bomb in Iraq. Vindman’s twin brother also worked for the NSC, as a lawyer.

But Republicans attacked his credibility, implying Vindman, who speaks fluent Ukrainian and Russian, was somehow displaying “dual loyalties.” Trump defenders also impugned his service on the NSC, suggesting his superiors were dissatisfied with his work.

And while many career public servants, diplomats, and other White House officials eventually testified against the president, Trump seemed to reserve a particular ire for Vindman.

“Then they said, well, maybe the transcription is not correct. But Lt. Col. Vindman and his twin brother, we had some people that were really amazing, but we did everything. I said, what was wrong with it? They said, ‘They didn’t add this word.’ I said, ‘Add it,” Trump said on Thursday, calling out an impeachment witness by name.

(He also had plenty to say about the Democrats who prosecuted the impeachment case against him.)

And as the Washington Post reported, Trump may not stop at Vindman and could oust other officials who testified against him.

The danger here, of course, is silence: that officials will be even more fearful to speak out or testify against the president if he acts inappropriately again.

And, if the White House succeeds in uprooting officials it sees as disloyal to Trump, there will be even fewer checks on an emboldened president.