A newly emboldened Trump gives Democrats a reason to fret 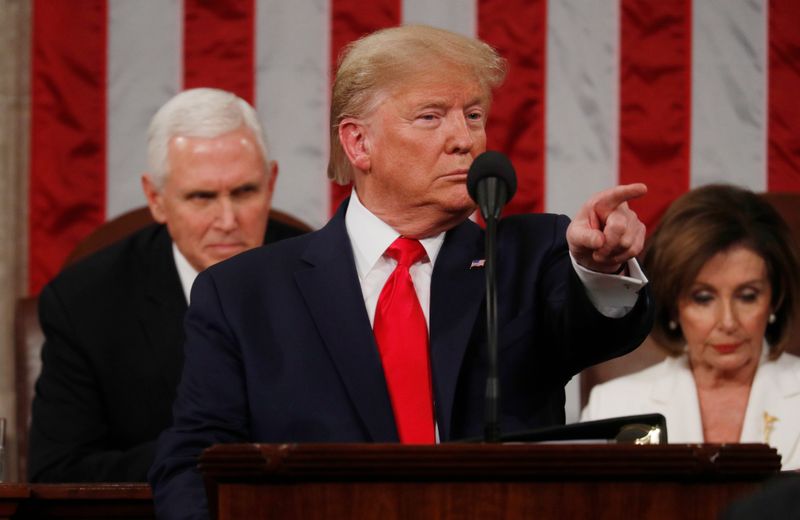 WASHINGTON (Reuters) - President Donald Trump took the stage for his State of the Union speech in an unfamiliar position: With the wind at his back.

For most of his three years in office, Trump has been surrounded by tumult, much of it of his own making, resulting ultimately in his impeachment by the House of Representatives.

Now, for the first time in a long time, things are looking up.

He is on the verge of being acquitted by his fellow Republicans in the U.S. Senate on Wednesday. Opinion polls show his approval ratings on an upswing. And the Democratic presidential nomination race was consumed by chaos as results from the Iowa caucuses this week were delayed by a full day because the mobile app used to record the results had a coding problem.

For Trump, the timing could not be better.

Despite being impeached, he is firmly entrenched in office, after surviving the Mueller investigation into Russian electoral interference and accusations that he abused his office by pressuring Ukraine to investigate a political rival, former vice president Joe Biden.

“He has had existential political threats facing him from the moment he was elected until tomorrow,” said Texas-based Republican consultant Matt Mackowiak, referring to the impending acquittal vote on impeachment charges.

All of it brought out the showman in the former reality TV star during his State of the Union speech on Tuesday night. At one point, he choreographed a reunion between a U.S. servicemember returning from Afghanistan and his family to cheers from lawmakers.

Along that line, for much of the speech, Trump appeared to be making an overt appeal to suburban voters who could decide his fate.

He spoke of child-care initiatives, and efforts to combat AIDS and the opioid crisis. He called for greater transparency for medical bills, and he sought to take credit for protecting Americans with pre-existing healthcare conditions, even though his administration supports a lawsuit that would gut the Affordable Care Act.

Trump also touted bipartisan accomplishments such as the U.S.-Mexico-Canada trade deal and vowed to protect entitlement programs such as Medicare and Social Security. He pledged to protect the public from the coronavirus that is spreading in China and beyond.

But lest anyone think the combustible Trump had turned touchy-feely, he also reassured his hardline supporters by previewing what promises to be a recurrent campaign theme: accusing Democrats of supporting unlimited free healthcare to undocumented immigrants.

As he did during his first presidential campaign, he warned of the dangers of so-called “Sanctuary Cities” and detailed incidents of violent crime committed by border-crossers.

Trump, too, seemed eager to exploit divisions among Democrats as they struggle to settle on a candidate who could mount the biggest threat to him.

The early favorite, Biden, appeared to have stumbled badly in Iowa, while U.S. Senator Bernie Sanders, a democratic socialist, was much more competitive.

At one point, Trump appeared to reference Sanders, who favors a government-run healthcare system, by declaring “We will never let socialism destroy American healthcare!"

At a campaign event in New Hampshire, Sanders drew a laugh from the crowd on Tuesday when he questioned Trump’s pledge to improve healthcare in America: “Really? How gullible do you think the American people are?” he said.

In his speech to Congress, Trump did not address the most polarizing topic in the room, the months-long attempt by Democrats to remove him from office. He avoided any temptation to take a victory lap ahead of Wednesday’s Senate vote.

“It was very smart to ignore the impeachment trial, stay above the fray and instead provide a laundry list of accomplishments along with proposals that will keep his base rock solid,” said Ron Bonjean, a Republican strategist in Washington.

That did not stop partisan tensions from running high. At the close of his remarks, Democratic leader Nancy Pelosi, who had orchestrated Trump's impeachment in the House, tore up her copy of his speech. Earlier, Trump had refused to shake her hand upon entering the chamber.

While recent polls showed that more than 40 percent of Americans favored Trump’s conviction and removal from office on charges that he tried to persuade Ukraine to interfere in the coming election, Trump received good news from another poll on Tuesday.

The Gallup organization said he had reached his personal best in their tracking poll, hitting 49% approval – the highest since he took office.

That prompted nervous Democrats on social media all day to fret that Trump, after three years of non-stop drama, might be peaking at just the right time.