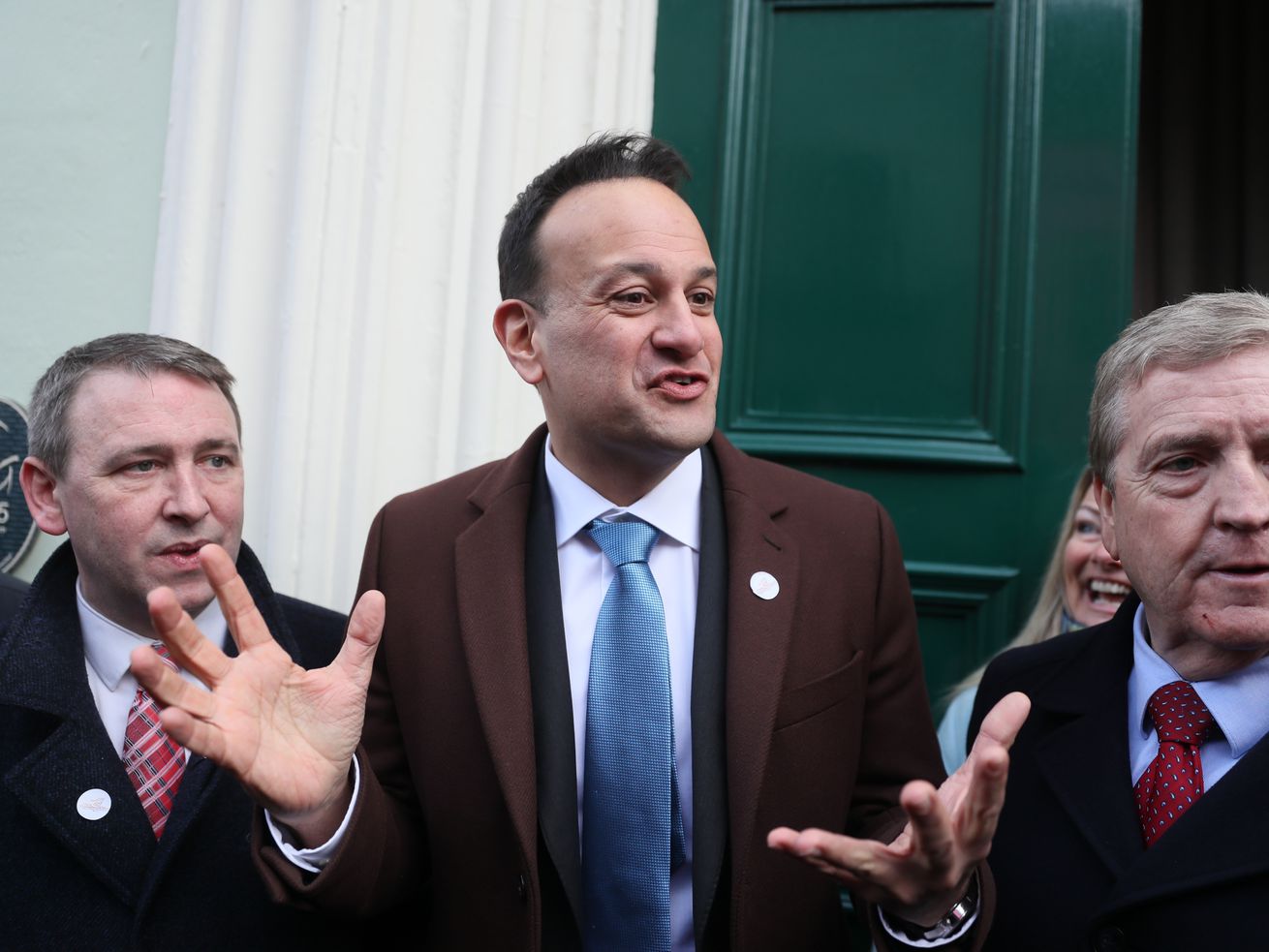 Sinn Fein’s surge, Leo Varadkar’s troubles, and what else to know about the vote.

Irish leader Leo Varadkar came to power in 2017 in a historic victory. Ireland’s youngest-ever prime minister and the openly gay son of Indian immigrants, he presented a new image of the once staunchly Catholic country. Then Brexit supercharged his international profile.

But things are not looking great for Varadkar, or his center-right party, Fine Gael, as they head into Saturday’s elections in Ireland. Varadkar called snap elections in January after an arrangement with his party’s traditional rival, Fianna Fáil, began to crumble. Varadkar had little choice but to call a vote.

Varadkar achieved remarkable success abroad in the Brexit negotiations, managing to protect Ireland’s interests by preserving its open border with Northern Ireland (which is part of the United Kingdom, which just left the European Union) and getting the EU to unify behind the interests of Ireland, one of its smaller members.

But at home, Irish voters are increasingly dissatisfied with the government’s handling of major domestic issues, housing and health care top among them.

Varadkar’s pitch — which includes “Brexit is still far from over” and “you shouldn’t change teams midway through the game” — isn’t resonating with voters who are eager for change and fed up with the high cost of housing and insufficient public services.

Which is why the left-wing, all-Ireland party Sinn Féin is suddenly surging in the polls. That could dramatically change Ireland’s politics — although, at least this time around, it’s impossible for the party to win power outright.

That also means that Ireland’s election results could be very messy, as no one party is likely to win outright, which means they’ll all need other parties to form a government. Right now, it looks like Fianna Fáil might win the most votes, but no one knows yet what kind of coalition it might form — or if it can even do so.

So, with that, here are three big things to know about Ireland’s elections this Saturday.

1) Forget Brexit: This election is about health care and housing and the desire for change

Though Varadkar came on the scene in 2017, his party, Fine Gael, has been in power since 2011. Fianna Fáil, the other main party, has supported Fine Gael since 2016 in what’s known as a “confidence and supply” arrangement — basically, that means Fianna Fáil agrees not to defeat the government on key votes, but it doesn’t have a formal position within the government.

Brexit negotiations (and the many, many Brexit delays) kept the otherwise fragile arrangement intact, but once the UK’s departure from the EU was assured, the agreement was more or less doomed. Though Ireland was already expected to have elections in the spring, probably around May, Varadkar went ahead and called the snap elections for February.

Ireland got what it wanted out of the first phase of Brexit — no hard border on the island of Ireland, and no disruptive no-deal — which would naturally seem to be a boost for Varadkar and his government, especially since EU-UK trade negotiations are set to begin.

But experts say this election isn’t really about Brexit at all.

The election “has focused squarely on quality-of-life issues, primarily on the ongoing crises in housing and health care in Ireland,” Cera Murtagh, assistant professor of Irish politics at Villanova University, told me.

Ireland has a fairly strong economy, but housing costs have skyrocketed. Younger generations can’t afford to buy homes and the country is dealing with a record-high homeless population. Dublin is one of the costliest cities in Europe to live in.

Ireland’s health care system is also facing serious shortfalls, as it has for years. A recent poll by the Irish Times found that 42 percent of Irish voters ranked health care as the top priority, followed by 32 percent who thought housing was the most important issue. Brexit came in at a measly 3 percent.

Part of the reason Brexit may not be such a big deal, experts told me, is because any of Ireland’s political parties would probably seek to represent the same interests, so there’s really no disagreement there.

All of this is bad news for Varadkar. It’s perhaps even worse for his party, Fine Gael. If voters are dissatisfied with the status quo, asking them to reelect a party that’s been in power for nearly a decade is not an easy ask. And Fianna Fáil, even though it isn’t formally part of the current government, is the second of the two main parties and is also seen as part of this centrist status quo.

“Change has been the dominate theme,” Gary Murphy, a professor of politics at Dublin City University, told me. “Many people don’t see a huge change in their own circumstances on the ground, and if you’re a governing party in the Irish system when the narrative goes against you, it’s very difficult to rein it back in.”

One party in particular has seized upon the narrative that Ireland’s two main parties are more of the same. That party is Sinn Féin.

Sinn Féin is a political party that represents both the Republic of Ireland and Northern Ireland.

In Northern Ireland, it’s the largest party representing nationalists, meaning those who believe in a united Ireland. But in the Republic of Ireland, it’s traditionally been a less influential political player, both because of its left-wing policies and its radical past, specifically its affiliation with the Irish Republican Army (IRA) during the Troubles.

But Sinn Féin’s political status in the Republic of Ireland has changed in recent years, and dramatically so in the lead-up to the current election. An Irish Times poll earlier this week found that Sinn Féin had the most support among Irish voters at 25 percent, with Fianna Fáil in second at 23 percent and Fine Gael at just 20 percent.

But its dramatic boost has little to do with the question of Irish unification, an issue that’s become much more serious after Brexit. Instead, Sinn Féin and its leader, Mary Lou McDonald, have promised to deliver change that the Irish electorate seems eager for, framing their left-wing policies as the antidote to the centrism and stagnation of Ireland’s two major parties, which have dominated Irish politics since independence in the 1920s.

Murphy said Sinn Féin’s appeal is grounded in old-school, leftist politics. And it’s apparently working, particularly with younger voters who are much more detached from Sinn Féin’s controversial past. Ireland’s youth surge has made a difference in politics, experts told me, especially with the recent referendums on marriage equality in 2015 and abortion in 2018.

Sinn Féin’s rise echoes the anti-elite sentiment that’s upended other democracies in recent years, though this time it’s on the left, not the right. Still, Varadkar has tried to tie their rise to the recent populist victories in the UK and the US.

“Bear in mind that all change isn’t change for the better,” Varadkar said during a leaders’ debate this week. “We saw in Britain with Brexit, people voting for change and they got Brexit. We saw Donald Trump being elected in the US. That’s not the kind of change we want.”

This surging support for Sinn Féin has taken Ireland by surprise — maybe nobody more so than the party itself. After all, it did poorly in local and European elections last year.

“They were a party that was kind of stagnating,” Murphy said. “Their rise has taken many people, including myself, by some surprise. They weren’t getting traction, and now they’re benefiting from this sort of discontent.”

Likely because of those poor results, Sinn Féin isn’t contesting enough seats in Ireland’s 160-seat Dáil Éireann (its parliament) to win power outright. Eighty seats are needed for a majority, but Sinn Féin is standing in elections for only 42 of them. What’s more, both Fine Gael and Fianna Fáil have said they won’t form a coalition government with Sinn Féin.

But if Sinn Féin does as well as the polls suggest, it’s still going to rattle politics. It could potentially upend the duopoly of Fianna Fáil and Fine Gael, making Sinn Féin much harder to ignore. Symbolically, it would be a huge deal.

“Given its leftist platform and republic orientation, Sinn Féin’s future participation in government could herald a significant shift in direction for Ireland, both in policy terms and on the question of the border,” Villanova University’s Murtagh said.

3) Ireland will elect new leaders. But forming a government is going to be tricky.

“I think we can make one prediction, very straightforwardly: no party is going to win a majority,” Brendan O’Leary, Lauder professor or political science at the University of Pennsylvania, told me.

That’s point No. 1. Point No. 2, O’Leary said, is that it’s “going to be extremely close between the top three: Fianna Fáil, Fine Gael, and Sinn Féin.” But one has to be on top, and right now polls suggest Fianna Fáil is likely to get the most seats, at about 40.

That is, of course, not close enough to a majority, which means it’s going to need support from other parties, potentially from smaller left-leaning parties, like Labour or the Greens. (Fianna Fáil is a bit more center-left.)

Micheal Martin, the leader of Fianna Fáil, has also ruled out a coalition with Fine Gael — but depending on the numbers, he might have to negotiate or go with an arrangement similar to the one the party has now, except this time the roles would be reversed.

Currently, though, the prospects of Varadkar returning as prime minister look pretty grim, even if Varadkar himself is a bit more personally popular than the party he leads.