Home World News What will Palestinians do now?

What will Palestinians do now? 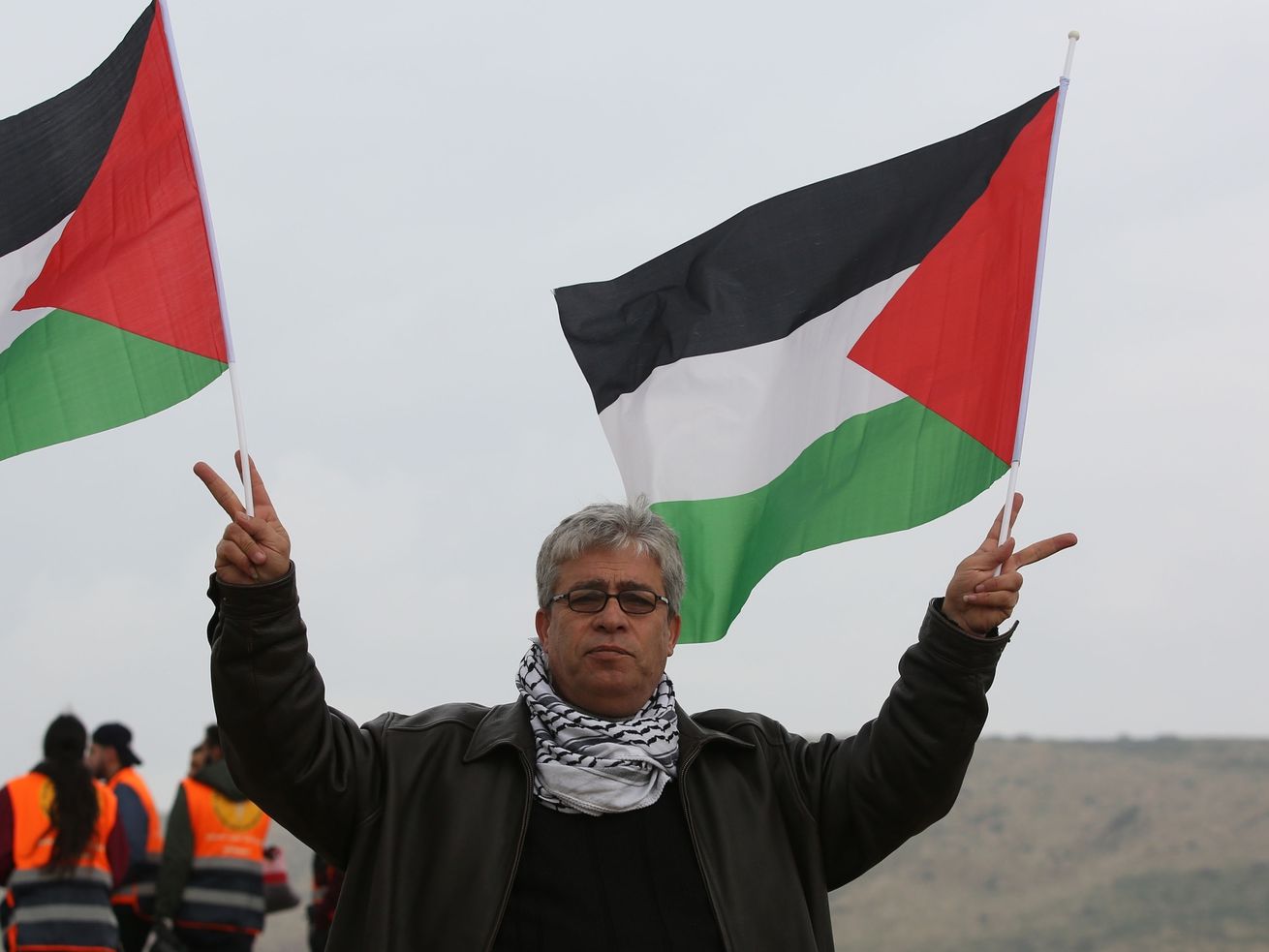 “After the nonsense that we heard today we say a thousand no’s to the ‘deal of the century,’” said Mahmoud Abbas, president of the Palestinian Authority, which governs the West Bank, at a news conference shortly after the proposal’s unveiling Tuesday. “We are certain that our Palestinian people will not let these conspiracies pass. So, all options are open.”

What those options are, though, remains an important question. It’s still unclear just what Palestinian leaders plan to do going forward, especially if they continue to refuse to negotiate with the Trump administration.

Will Abbas try to gain international support for his views instead of Trump’s, or will he simply try to wait out the American president’s time in office? What of the terrorist group Hamas, which governs the Gaza Strip, and therefore plays an important role in defining next steps? And how about the millions of Palestinians directly affected by the US and Israeli-backed plan? Will they choose to demonstrate peacefully, violently, or not at all?

To get a better sense of what might happen, I called Ghaith al-Omari, who’s a senior fellow at the Washington Institute for Near East Policy think tank. A former adviser to Abbas and the Palestinian negotiating team during the peace process, he has a deep insight into what leaders in the West Bank and Gaza are thinking right now.

The one thing he’s sure about? Trump’s plan strengthened hardliners and weakened those who might still want to chart a diplomatic path. “It devalues the Palestinian Authority’s paradigm of diplomacy and negotiation and will reinforce the Hamas paradigm of violence and terror,” he told me.

Our conversation, edited for length and clarity, is below.

How will Palestinians respond to the peace plan?

They’ve already rejected the plan. They also called for an Arab League meeting on Saturday with the idea of getting support from Arab countries. I have to say that Israeli Prime Minister Benjamin Netanyahu’s immediate push for annexation of parts of the West Bank and the clear inclinations of the Trump administration will make the Palestinians’ job much easier. No Arab country can accept unilateral annexation.

Should we assume that the peace plan is dead on arrival, then?

In diplomatic terms, it’s dead. Once the Palestinians and the Arab states take a clear position, then the Europeans will follow suit, and the Russians would come on board, and in the end we’re likely going to end up with a plan that is only truly supported by the US and Israel, and maybe some marginal countries.

Now, what does the plan mean for changes on the ground? That’s really up to the Israelis. Are they going to go for extensive annexation? Would this lead to a collapse of the Palestinian Authority, et cetera? We have to wait and see.

As you alluded to, Netanyahu has said his cabinet will vote on annexing 30 percent of the West Bank. What do you make of that news?

The timing is precious. Annexing any parts of the West Bank or any parts of the Jordan Valley will create a very strong Arab reaction. Not only Palestinian, but also Jordanian, because Jordan has said annexation would have dire consequences in terms of the relations with Israel.

A situation like that would certainly make it impossible for the United States to build any international support for the plan.

What should Palestinian leaders do if diplomacy is dead?

If that doesn’t work, they will get support for their side through bilateral agreements with key states, and then they’ll go to the UN Security Council. They would surely garner an American veto there on a resolution, but that’s fine for them as long as they get the other 14 countries on the panel to sign on to it.

So we’re going to see a very intensive diplomatic effort to create an international consensus that they hope will outlive Trump. On the ground, if there is an annexation, then the Palestinians will find it very hard to continue their security cooperation with Israel. And if that ends, then the possibilities for deterioration and instability become extremely worrying.

To be clear, what would going to the UN or the EU really do? Why are those important steps for Palestinians to take at this point?

Because from the Palestinian point of view, they think that they can wait out Trump heading into the US presidential election in November. They want to be in a position where they have a new US administration and the international consensus remains within the old parameters. Then they’ll hope that the new administration will revert back to the traditional US position.

If history is any guide, this can very quickly turn into a crisis

Not all Palestinian leaders agree diplomacy is the right course of action. One could argue the Trump administration’s plan is a gift to hardliners who want to pursue a new course. How do you expect the intra-Palestinian struggle to play out?

It’s playing out as we speak. Palestinian leader Mahmoud Abbas convened a meeting, and Hamas and the Islamic Jihad were at the meeting. These two actors will continue pushing for more violence. Ironically, they will push for it in the West Bank, but not where they govern, in Gaza.

They are trying to corner Abbas, and part of that is dictating the agenda with terror. They feel politically very empowered and Abbas really is in a very difficult place to reject their inclusion. This crisis will not lead to unity. But this will lead, I think, to Hamas being empowered in the West Bank.

So you’re saying the Trump administration’s peace plan proposal might give Hamas a bit more power within Palestinian leadership?

Absolutely. It devalues the Palestinian Authority’s paradigm of diplomacy and negotiation and will reinforce the Hamas paradigm of violence and terror.

There was a lot of worry that if the US moved its embassy to Jerusalem, there’d be a lot of violence. There was some, but it didn’t become a big thing. What should we expect the popular reaction to be to this plan?

That’s the biggest unknown. The lack of violence after the Jerusalem embassy move was partly because the public was tired and partly because the Palestinian security forces were coordinating with the Israelis to keep demonstrations away from friction points. Today, it’s clear the Palestinian public is checked out. But if history is any guide, this can very quickly turn into a crisis.

We have volatility, but simply no way of predicting how the public is going to react. Keep in mind that the Palestinian public is not only fed up with the Israeli diplomacy, but also with their own leadership. So would they respond to Hamas’s calls for violence or not? This is truly an ongoing concern, and I think this is what’s keeping the Israeli and Palestinian security folks awake at night.

Surely some will worry that a declining change of diplomacy means the possibility of a major conflict — or at least a bigger conflict — grows. Do you think that fear is justified?

Yes, I think that fear is justified. Again, I wouldn’t go for doom and gloom because we have no certainty, but I think it increases the likelihood and increases the volatility of the situation.

What needs to happen for this situation to improve, then?

In the short term, I believe the priority is to ensure that things don’t devolve into a security problem. Here, the Arab countries can play an important role in convincing Abbas to maintain security control.

In the longer term, I think the real battle is whether the Trump administration manages to turn this into the new international terms of reference, in which case the Palestinians will only become weaker. If that happens, Palestinians might manage to isolate themselves from the American and Israeli positions.

So far, though, I have to say that the Trump administration’s diplomatic performance has been extremely lackluster. So for the Palestinians, the way they see it is: Wait out this administration and see what comes next.