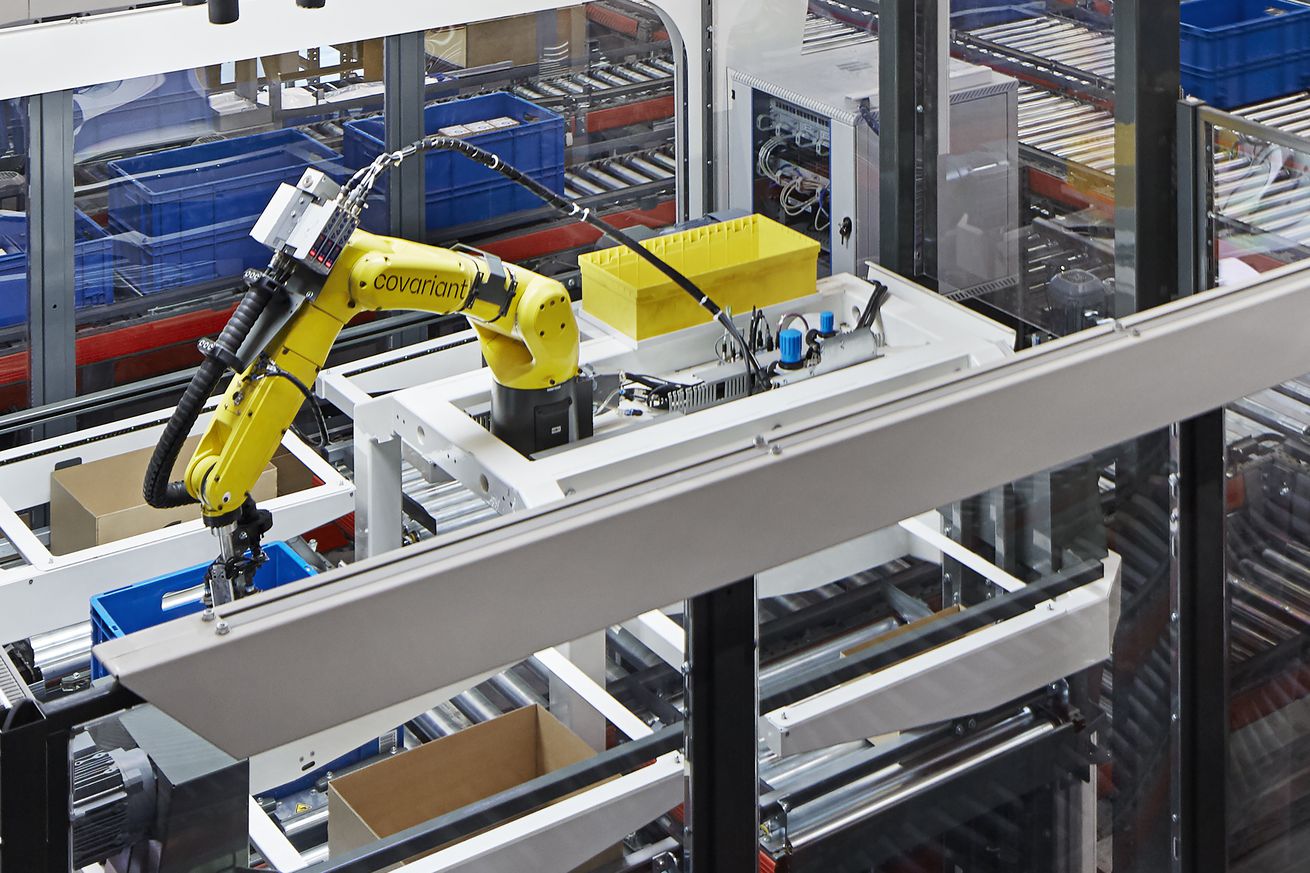 A robot made by Covariant installed in

Right now, in a warehouse not far from Berlin, a bright yellow robot is leaning over a conveyor, picking items out of crates with the assurance of a chicken pecking grain.

The robot itself doesn’t look that unusual, but what makes it special are its eyes and brain. With the help of a six-lens camera array and machine learning algorithms, it’s able to grab and pack items that would confound other bots. And thanks to a neural network it will one day share with its fellows in warehouses around the world, anything it learns, they’ll learn, too. Show this bot a product it’s never seen before and it’ll not only work out how to grasp it, but then feed that information back to its peers.

“We want a very high number of these machines out there.”

“We tested this robot for three or four months, and it can handle nearly everything we throw at it,” Peter Puchwein, vice president of innovation at Knapp, the logistics company that installed the robot, tells The Verge. “We’re really going to push these onto the market. We want a very high number of these machines out there.”

For the bot’s creators, Californian AI and robotics startup Covariant, the installation in Germany is a big step forward, and one that shows the firm has made great strides with a challenge that’s plagued engineers for decades: teaching robots to pick things up.

It sounds easy, but this is a task that’s stumped some of the biggest research labs and tech companies. Google has run a stable of robot arms in an attempt to learn how to reliably grasp things (employees jokingly call it “the arm pit”), while Amazon holds an annual competition challenging startups to stock shelves with robots in the hope of finding a machine good enough for its warehouses (it hasn’t yet).

But Covariant claims its bots can do what others can’t: work 24 hours a day, picking items without fuss. This doesn’t mean that picking is a solved problem, but it does unlock a lot of potential. This is particularly true in the world of warehouses and logistics, where experts say it’s difficult to find human workers and they need all the robots they can get.

Speaking to The Verge, Pieter Abbeel, Covariant co-founder and the director of the Berkeley Robot Learning Lab, compares the current market in robot pickers to that of self-driving cars: there’s a lot of hype and flashy demos, but not enough real-world testing and ability.

”Our customers don’t trust short demo videos anymore,” says Abbeel. “They know very well most of the difficulty is in consistency and reliability.”

Puchwein of Knapp agrees, telling The Verge: “The typical thing for startups to do is to show some short, well edited videos. But as soon as you try to test the robots, they fail.”

A lot of this hype has been generated by the promise of machine learning. Today’s industrial robots can pick with great speed and precision, but only if what they’re grabbing is equally consistent: regular shapes with easy-to-grasp surfaces. That’s fine in manufacturing, where a machine has to grab the same item over and over again, but terrible in retail logistics, where the objects being packed for shipping vary hugely in size and shape.

Hardcoding a robot’s every move, as with traditional programming, works great in the first scenario but terribly in the second. But if you use machine learning to feed a system data and let it generate its own rules on how to pick instead, it does much, much better.

Covariant uses a variety of AI methods to train its robots, including reinforcement learning: a trial and error process where the robot has a set goal (“move object x to location y”) and has to solve it itself. Much of this training is done in simulations, where the machines can take their time, often racking up thousands of hours of work. The result is what Abbeel calls “the Covariant Brain” — a nickname for the neural network shared by the company’s robots.

Covariant, which was founded in 2017 under the name Embodied Intelligence and comes out of stealth today, is certainly not the only firm applying these methods, though. Numerous startups like Kindred and RightHand Robotics use similar fusions of machine learning and robotics. But Covariant is bullish that its robots are better than anyone else’s. “Real world deployments are about extreme consistency and reliability,” says Abbeel.

Puchwein agrees, and he would know. He’s got 16 years of experience in the industry, including working for Knapp, one of the largest builders of automated warehouses worldwide. It installed 2,000 systems last year with a turnover of more than €1 billion.

Puchwein says the company’s engineers traveled around the world to find the best picking robots and eventually settled on Covariant’s, which it installs as a nonexclusive partner. “Non-AI robots can pick around 10 percent of the products used by our customers, but the AI robot can pick around 95 to 99 percent,” says Puchwein. “It’s a huge difference.”

Puchwein isn’t the only one on board, either. As it comes out of stealth today, Covariant has announced a raft of private backers, including some of the most high-profile names in AI research. They include Google’s head of AI, Jeff Dean; Facebook’s head of AI research, Yann LeCun, and one of the “godfathers of AI,” Geoffrey Hinton. As Abbeel says, the involvement of these individuals is as much about lending their “reputation” as anything else. “Investors aren’t just about the money they bring to the table,” he says.

For all the confidence, investor and otherwise, Covariant’s operation is incredibly small right now. It has just a handful of robots in operation full time, in America and abroad, in the apparel, pharmaceutical, and electronics industries.

In Germany, Covariant’s picking robot (there’s just one for now) is packing electronics components for a firm named Obeta, but the company says it’s eager for more robots to compensate for a staff shortage — a situation common in logistics.

“It’s very hard to find people to do this sort of work.”

For all the talk of robots taking human jobs, there just aren’t enough humans to do some jobs. One recent industry report suggests 54 percent of logistics companies face staff shortages in the next five years, with warehouse workers among the most in-demand positions. Low wages, long hours, and boring working conditions are cited as contributing factors, as is a falling unemployment rate (in the US at least).

“It’s very hard to find people to do this sort of work,” Michael Pultke of Obeta tells The Verge through a translator. He says Obeta relies on migrant workers to staff the company’s warehouses, and that the situation is the same across Europe. “The future is more robots.”

And what about the employees that Covariant’s robots now operate alongside — do they mind the change? According to Pultke, they don’t see it as a threat, but an opportunity to learn how to maintain the robots and get a better type of job. “Machines should do the base work, which is stupid and simple,” says Pultke. “People should look after the machines.”