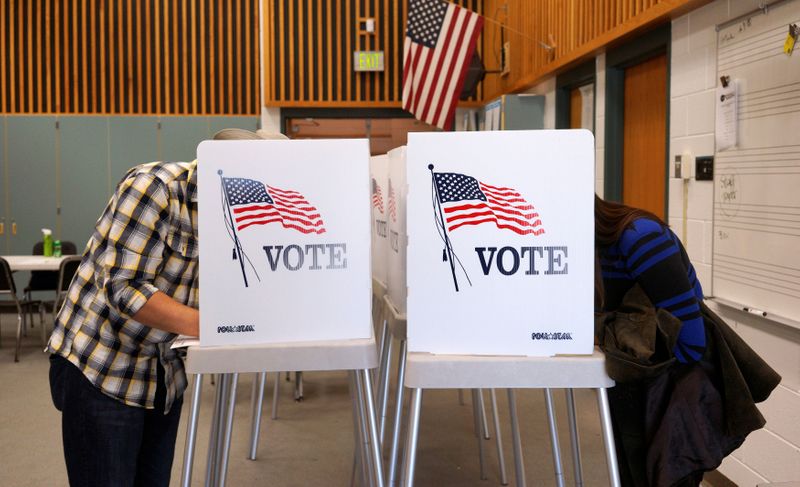 © Reuters. FILE PHOTO: Voters fill in their ballots as they vote in the U.S. midterm elections at a polling place in Westminster, Colorado

WASHINGTON (Reuters) - As the 2020 race heats up, the Supreme Court agreed on Friday to hear a dispute involving the complex U.S. presidential election system focusing on whether Electoral College electors are free to break their pledges to back the candidate who wins their state's popular vote, an act that could upend an election.

The Supreme Court will take up appeals in two cases - from Washington state and Colorado - involving electors who decided to vote in the Electoral College process for someone other than Democrat Hillary Clinton in 2016 even though she won the popular vote in their states.

The justices will determine if such so-called faithless electors have the discretion to cast Electoral College votes as they see fit or whether states can impose restrictions including with penalties. The case is expected to be argued in April and decided by the end of June.

President Donald Trump is seeking re-election on Nov. 3, with a field of Democrats seeking their party's nomination to challenge him. His administration did not take a side in either case.

"We are glad the Supreme Court has recognized the paramount importance of clearly determining the rules of the road for presidential electors for the upcoming election and all future elections," said Lawrence Lessig, a lawyer for the faithless electors sanctioned in Washington and Colorado.

Colorado Secretary of State Jena Griswold, a Democrat, said she hopes the justices will let states enforce their laws.

The dispute involves the U.S. presidential election system set out in the U.S. Constitution in which the winner is determined not by amassing a majority of the national popular vote but by securing a majority of the electoral votes that are allotted to the 50 U.S. states and the District of Columbia.

Individuals who serve as Electoral College electors - typically party loyalists - cast these votes. All states, with the exception of Maine and Nebraska, have a winner-takes-all system awarding all electors to the presidential candidate who wins the state's popular vote.

The number of electors in each state is the sum of its two U.S. senators and its number of members in the House of Representatives, based on population size. The District of Columbia, which is not a state, is allotted three electors.

Typically an overlooked formality, the Electoral College took on greater importance after the 2016 election, when 10 electors cast ballots for someone other than their party's candidate. That was an unusually high number of faithless electors and could have changed the outcome in five of the 58 prior U.S. presidential elections, according to legal papers in one of the appeals filed at the Supreme Court.

Trump defeated Democratic rival Hillary Clinton by a margin of 304 to 227 Electoral College votes despite losing the popular vote nationally by about 3 million votes. Faithless electors could change the outcome of presidential elections with thinner Electoral College margins.

Electors pledge to vote for their party's candidate if that person wins the state's popular vote. At issue in the cases are laws requiring that electors follow through on those pledges.

While 32 states and the District of Columbia have such laws, a handful enforce them by removing and replacing faithless electors, or in some cases, imposing fines.

The plaintiffs challenged the sanctions, saying they were deprived of their rights under the Constitution's Article II as well as its 12th Amendment, which spell out the Electoral College process.

In Colorado, one elector, Micheal Baca, was replaced and his vote canceled when he sought to vote for Republican John Kasich, Ohio's former governor. A federal judge dismissed Baca's challenge, but the Denver-based 10th U.S. Circuit Court of Appeals last year revived the suit, concluding that Baca's constitutional rights were violated.

The Washington state case arose after three faithless electors voted for former U.S. Secretary of State Colin Powell, a moderate Republican, instead of Clinton. They each were fined $1,000 for their defiance, which they called the first such penalty in U.S. history. The Washington Supreme Court in 2019 upheld the fines.