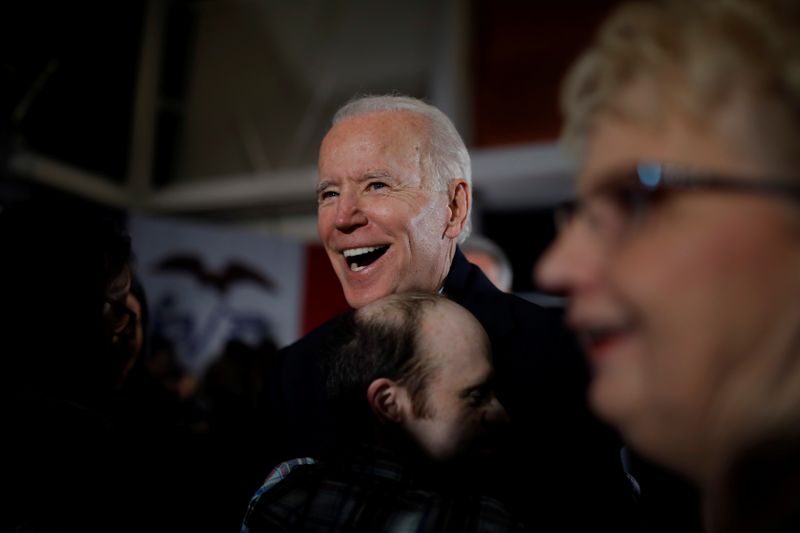 WASHINGTON (Reuters) - U.S. Senator Bernie Sanders and former Vice President Joe Biden appeared to be locked in a tight race for the Democratic presidential nomination, with only days left until voting begins, a couple of surveys indicated on Sunday.

Sanders led a poll of New Hampshire voters with 25% support. His closest competitor was former Vice President Joe Biden, with 16%, according to a poll by cable network CNN and the University of New Hampshire.

A separate poll of Iowa voters by CBS found Sanders and Biden statistically tied, with 26% and 25% respectively. Pete Buttigieg, the former mayor of South Bend, Indiana, was within striking distance at 22%.

Most of the field of Democratic candidates vying to challenge Republican President Donald Trump in the November 2020 election have turned their attention to Iowa, which holds the first contest on Feb. 3. New Hampshire will vote next.

Gaining momentum at the right time has historically been key to helping a candidate secure the nomination.

Candidates struggling to still build traction are facing crunch time. U.S. Senator Amy Klobuchar, who is still trying to break 10% in polls, picked up the endorsement of the New Hampshire Union Leader newspaper. The largest publication in the state, the historically conservative editorial page has previously had more influence in Republican primaries.

Nationally, Biden still appeared to be holding a lead, with a Washington Post-ABC poll on Sunday showing Biden and Sanders pulling away from the pack.

The poll showed Biden at the helm with 32% support, followed by Sanders at 23%. The next closest candidates were U.S. Senator Elizabeth Warren with 12%, and former New York City Mayor Michael Bloomberg with 8%.

The latest round of polls confirms earlier results this month that showed Sanders gaining momentum.