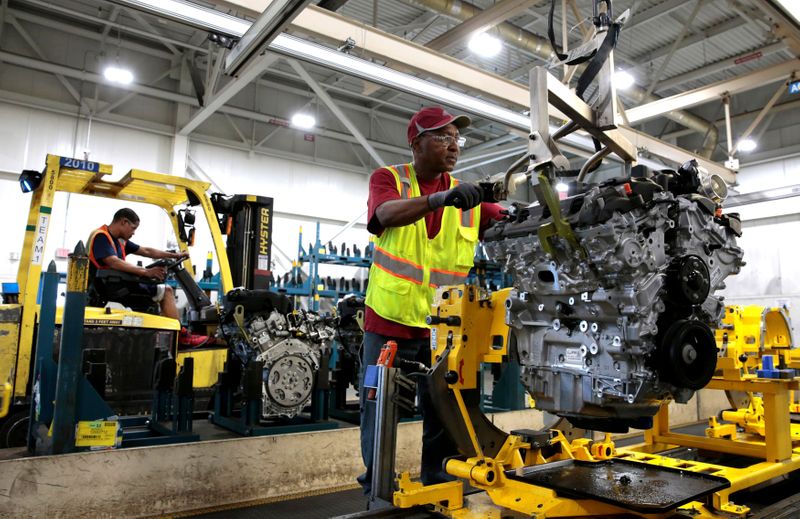 © Reuters. FILE PHOTO: A General Motors assembly worker moves a V6 engine, used in a variety of GM cars, trucks and crossovers, from the final assembly line at the GM Romulus Powertrain plant in Romulus

The housing market also provided some discouraging news on Wednesday, with contracts to purchase previously owned homes dropping by the most in more than 9-1/2 years in December. The housing market has been regaining momentum after slumping in 2018 and the first half of 2019, thanks to lower mortgage rates.

The Federal Reserve, which cut interest rates three times last year, left them unchanged on Wednesday, noting that "economic activity has been rising at a moderate rate."

The Commerce Department said the goods trade gap, which had dropped for three straight months due to declining imports, surged 8.5% to $68.3 billion last month.

The overall trade deficit is on track for its first annual fall since 2013, with economists saying the Trump administration's "America First" agenda, underscored by an 18-month trade war with China, has restricted the flow of goods, particularly imports.

Though Washington and Beijing signed a Phase 1 trade deal this month, U.S. duties remained in effect on $360 billion of Chinese imports, about two-thirds of the total.

Exports of goods rose 0.3% last month to $137.0 billion after increasing 0.8% in November. There were increases in exports of industrial supplies and capital goods. Exports of consumer goods and motor vehicles and parts dropped. Food exports were unchanged last month.

The dollar was marginally firmer against a basket of currencies. Stocks on Wall Street were trading higher, as were U.S. Treasury prices.

The sharp widening in the goods trade deficit last month suggests the expected boost to fourth-quarter gross domestic product from trade could be a bit more moderate than initially expected. Still, the overall goods trade deficit was probably smaller relative to the July-September period.

A smaller trade gap is positive for the calculation of GDP. Trade subtracted 0.14 percentage point from GDP growth in the third quarter. The Atlanta Fed lowered its fourth quarter GDP estimate to a 1.7% pace from a 1.9% rate.

JPMorgan (NYSE:JPM) cut its fourth-quarter GDP estimate by three-tenths of a percentage point to a 1.4% rate. The economy grew at a 2.1% annualized rate in the July-September quarter. The government will publish its snapshot of fourth-quarter GDP on Thursday.

"It looks like the contribution to fourth-quarter GDP growth coming from trade will be more modest than we had previously anticipated," said Daniel Silver, an economist at JPMorgan in New York. "Details of the trade report related to the domestic absorption of capex point to equipment spending coming in a little weaker than we had estimated."

The anticipated trade lift to GDP growth could be offset by a smaller pace of inventory accumulation relative to the third quarter. The Commerce Department also reported on Wednesday that retail inventories were unchanged in December after declining 0.8% in the prior month. Motor vehicle and parts inventories were also flat after falling 1.8% in November.

Retail inventories, excluding motor vehicles and parts, the component that goes into the calculation of GDP, were also unchanged after decreasing 0.3% in November.

Wholesale inventories dipped 0.1% last month after gaining 0.1% in November. Inventory investment had a neutral impact on GDP growth in the third quarter.

A separate report from the National Association of Realtors showed its pending home sales index fell 4.9% in December, the biggest drop since May 2010, likely because of a shortage of houses on the market. Compared with one year ago, pending sales were up 4.6%.

Pending home contracts become sales after a month or two, and last month's decline suggests a slowdown in existing home sales, which raced to a near two-year high in December. Still, demand for homes remains strong. Another report from the Mortgage Bankers Association showed applications for loans to purchase a home increased 5% last week from the week before.

Cheaper borrowing costs are being offset by tight inventory, especially in the lower-priced segment of the market, because of land and labor shortages. There were a record-low 1.40 million previously owned homes on the market in December.