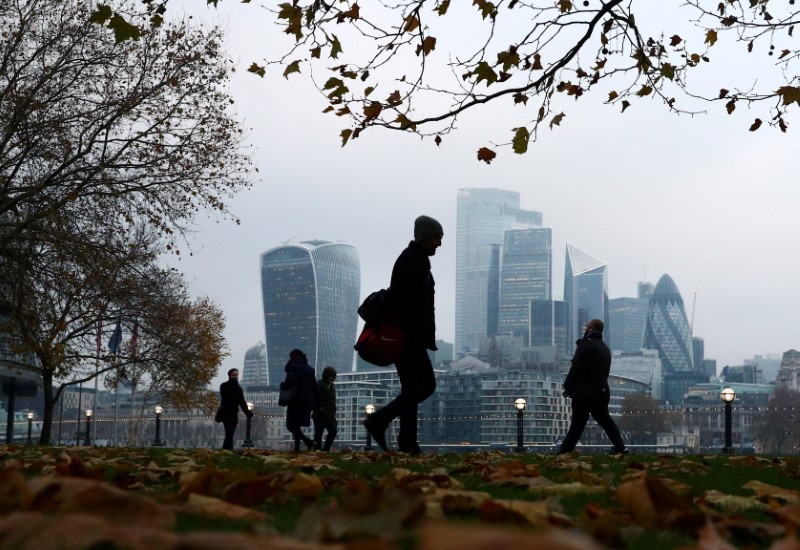 © Reuters. People walk through autumnal leaves in front of the financial district in London

LONDON (Reuters) - British companies are enjoying their best month in more than a year, a survey indicated on Friday, the strongest evidence yet of a post-election boost to the economy that could keep the Bank of England from cutting interest rates next week.

The index suggested the British economy was on track to grow around 0.2% in quarterly terms after slowing to a crawl late last year.

Earlier signs of weakness in the labor market had prompted two Bank of England rate-setters to vote for lower borrowing costs at the end of last year. Three others, including Governor Mark Carney, hinted recently that more economic stimulus might be needed.

The composite PMI, which combines manufacturing and services indexes, rose to 52.4 from 49.3, the highest reading since September 2018 and easily beating the 50.6 consensus forecast in a Reuters poll of economists.

"The big jump in the composite PMI - the fifth largest month-to-month gain since the survey started in 1998 - makes it likely, though not absolutely certain, that the BoE will pause for thought next week," said Samuel Tombs, an economist at Pantheon Macroeconomics.

However, sterling weakened and British government bond yields touched three-month lows after the data. Financial markets calculated that the Bank of England would cut interest rates next week at just over a 50% chance.

The services PMI rose in January to 52.9 from 50.0, also its highest level since September 2018 and above the consensus forecast of 51.0 in a Reuters poll.

Service-sector optimism rose to its highest in nearly five years this month, chiming with other business surveys from the Confederation of British Industry and Deloitte.

Still, the services PMI remained at levels historically associated with additional stimulus from the Bank of England and below the survey's long-run average of 54.8.

The reading for British manufacturing, which accounts for 10% of the British economy, was also better than expected, rising to 49.8 from 47.5, its highest since April. It remained still below the 50 mark that signaled contraction for a ninth month, but new orders increased for the first time since April.

"The uplift in sentiment about the outlook hints at even better growth to come, but confidence needs to continue to rise to ensure this solid start to the year has legs," IHS Markit's chief business economist Chris Williamson said.