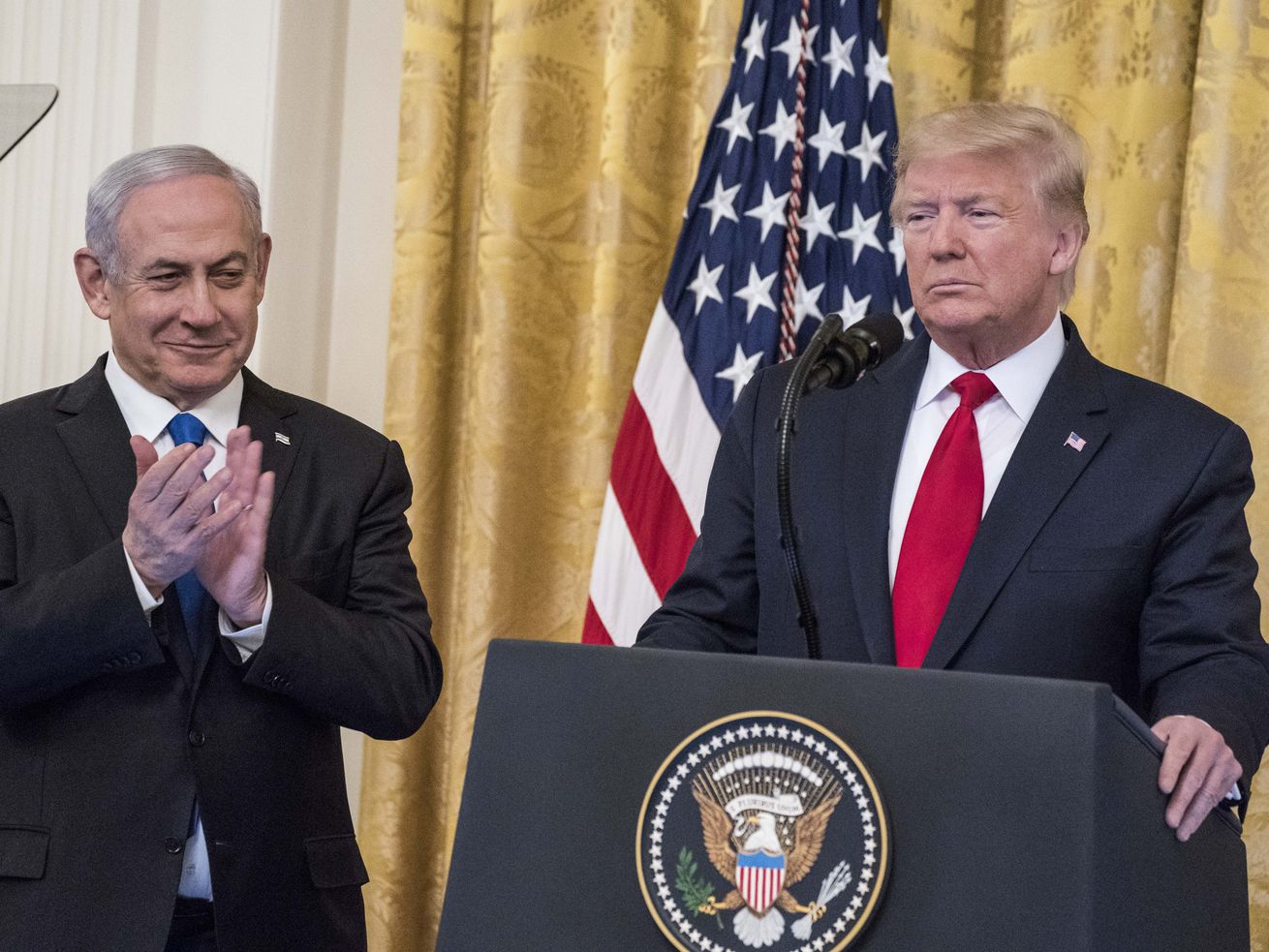 The proposal destroys the prospects for any real deal and brings Israel meaningfully closer to “apartheid.”

The proposal is missing a signature feature of every prior peace plan: a path to a viable Palestinian state. It divides up the Palestinian territories and surrounds them by Israel, and gives Israel total control over Palestinian security — allowing a future Palestinian government to exercise full control over its own land only when Israel deems it acceptable. It’s a kind of state-minus: a Palestine without much of its land and subservient to Israel for basic functions.

“Trump can try to make this a Palestinian state by calling it a state. But it ain’t ever gonna whistle,” writes Tamara Cofman Wittes, a senior fellow at the Brookings Institution’s Center for Middle East Policy.

Needless to say, the Palestinians cannot and will not agree to such humiliation, and Palestinian President Mahmoud Abbas has already ruled it out.

“No, no, and no,” he has said. “Jerusalem is not for sale. All of our rights are not for sale or bartering.”

In fact, the Trump administration didn’t even have a role in writing the plan: It was put together primarily by Trump’s son-in-law Jared Kushner, in consultation with the Israeli government. The notion that this is a good-faith effort to make peace is laughable.

So if the “peace plan” isn’t a peace plan, then what is it?

First, it’s an effort to help Netanyahu, a staunch Trump ally, in advance of tightly contested March elections in Israel. The release of a plan so tilted to Israeli priorities helps the right-wing prime minister sell himself as the man best positioned to handle the vital US-Israel relationship. And it doesn’t seem like an accident that the plan was released on the same day that Israel’s attorney general formally indicted Netanyahu on bribery and corruption charges.

Second, and more insidiously, it is a plan to legitimize Israel’s ongoing effort to seize additional Palestinian land.

The United States, as Israel’s most important ally and the historic mediator in the Israeli-Palestinian peace process, helps define the parameters of what counts as an acceptable outcome.

As soon as the Palestinians have rejected the plan — and it took only minutes for them to do so — the Israelis can say, “Well, we tried, but they wouldn’t deal.” And they can proceed with settlement expansion and land grabs, moving Israel toward “not peace, but apartheid,” as B’Tselem, a leading Israeli human rights group, put it in a press release on the proposal.

The Trump vision is, in short, a truly Orwellian creation: a “peace plan” that actually is a plan to destroy the prospects for peace.

Trump’s peace plan is a nonstarter

Prior to the Trump plan, the basic framework for Israeli-Palestinian peace negotiations had been relatively fixed. There would be two states, with the Palestinians taking control of the overwhelming bulk of the Palestinian-populated West Bank and Gaza Strip, and with Israel largely retreating to its current internationally recognized borders.

The two sides would come to agreement on thorny issues like which Israeli settlements in the West Bank could become part of Israel, and how exactly to share Jerusalem (a holy city for Judaism and Islam that both sides claim as their capital).

The Trump plan pretty much throws out this framework entirely.

Instead of allowing the two sides to negotiate solutions to these core disagreements, the plan lays out a detailed vision for final terms before negotiations have even begun.

On each of the four main issues — West Bank borders/settlements, Jerusalem, justice for Palestinian refugees displaced in the 1948 war, and balancing Israel’s security needs with Palestinian sovereignty — the plan is heavily tilted in Israel’s direction.

“Palestinians are being offered no state at all, just the box a state came in,” writes Hussein Ibish, the senior resident scholar at the Arab Gulf States Institute. “Israel will be left in complete control of the entire area from the river to the sea. Pure apartheid.”

Perhaps the easiest way to see why is to look at the plan’s map for what final borders would look like. The proposed Palestinian state is in green; the little dots in the middle of the West Bank are Israeli “enclaves” that will remain part of Israel:

What you see is a Palestinian “state” that covers Gaza and a fraction of the West Bank, is surrounded by Israel, and is cut up even further by Israeli land. The plan seems to permit Israel beginning the process of annexing part of this land, starting with the Jordan Valley in the eastern part of the West Bank, an area that would cut off Palestinians from neighboring Jordan.

And the drawing actually understates how bad things will be, because it’s simply too zoomed out to illustrate how many different Israeli settlements there are and how much they’d screw up Palestinian development. This map alone would render the entire plan unacceptable to Palestinians.

“For the first time, the United States has unveiled a map with precise borders, and an Israeli leader has endorsed it. That map is a maximal vision of Israeli territorial control in the West Bank and Jerusalem,” Michael Koplow, the policy director of the Israel Policy Forum, writes in the Forward.

But it’s also terrible for Palestinians on the other three main contentious issues.

The plan states that “Jerusalem will remain the sovereign capital of the State of Israel, and it should remain an undivided city.” The Palestinians will be granted only a tiny fraction of the heavily Palestinian-populated part of the city known as East Jerusalem that excludes the religious holy sites; “all of Jerusalem’s holy sites should be subject to the same governance regimes that exist today,” as the plan euphemistically puts it.

On refugees, the Palestinians literally get nothing — just a vague promise that some money might come up.

“Proposals that demand that the State of Israel agree to take in Palestinian refugees, or that promise tens of billions of dollars in compensation for the refugees, have never been realistic and a credible funding source has never been identified,” the plan explains. “Nevertheless, we will endeavor to raise a fund to provide some compensation to Palestinian refugees.”

Yet it is the security section that is perhaps most revealing. Not only would the future state of Palestine not be permitted to develop its own “military or paramilitary” forces — ever — but Israel would also maintain full security control over Palestinian territory until it decides not to. And if at any time Israel changes its mind, it is within its rights under the deal to retake military control.

A peace plan is supposed to end Israel’s military occupation of the West Bank. By giving Israel full control, the Trump plan makes such a withdrawal nearly impossible to envision.

“If you put it in Israel’s hands it will never happen,” writes Ilan Goldenberg, the Middle East security director at the Center for a New American Security. “It’s a recipe for permanent occupation.”

The real purpose of the plan

Given these harsh terms and the total lack of Palestinian buy-in, there is no plausible reason to believe this plan could ever serve as the basis of an actual peace agreement for the two sides.

So what’s the purpose of releasing it with all this fanfare?

Part of the explanation is purely political: Trump wants to help his friend Netanyahu seem strong before Israel’s elections. The timing of the plan’s release makes this relatively transparent.

But the Trump administration wouldn’t go through all the trouble of drafting a plan just to interfere in a foreign election. There’s a deeper, even likelier explanation: that the right-wingers who make up Trump’s Israel-Palestine team have worked with the Israeli right to figure out a way to undo the peace process itself.

Israeli politics has tilted heavily against peace negotiations in the past two decades, largely as a result of the collapse of the 1990s-era peace process into the violence of the second intifada.

The March elections are primarily a contest between Netanyahu and the center-right Blue and White party, which itself has endorsed the idea of annexing part of the West Bank — and celebrated the release of Trump’s plan as providing “a strong, viable basis for advancing a peace accord with the Palestinian.”

Consider the likely effect of this plan’s release on Israeli politics in this context. The Israel Policy Forum’s Koplow does a good job outlining it:

Israeli expectations have been permanently reset, and the trajectory of the Israeli position moving closer to the Palestinian one with each successive round of talks is over. Trump has destroyed any remaining hope that Israel will settle for the deal that peace processers have envisioned for a quarter century. In fact, Trump’s vision is weighted so far in one direction that it makes any deal at all hard to envision, particularly if Israel actually goes through with the annexation scenario that Trump has now greenlit.

Not only will Israeli leaders be hard-pressed to accept less than what Trump offered, the inevitable Palestinian rejection of Trump’s plan will give them the opportunity to start taking land on their own.

The Israeli argument since Oslo has always been: “We tried to negotiate, but the Palestinians wouldn’t listen.” They’ll be able to say that this time around too, even though the negotiations were never offered in good faith.

What’s more, they can use the plan’s huge territorial concession — that Israel will get to keep its West Bank settlements permanently — as a justification for annexing at least part of it unilaterally. Netanyahu had vowed to annex the Jordan Valley prior to the plan’s release; Israel’s cabinet appears set to start the annexation effort as early as Sunday.

Such a land grab would force Israel down one of two dangerous one-state paths.

Option one would be to give the vote to Palestinians and make them full citizens of Israel, leading to an Arab demographic majority and thus ending Israel’s status as a Jewish state. This is not only a recipe for violence between Muslims and Jews but also unacceptable to Israel’s current leadership, who care much more about the state’s Jewish character than its democratic one.

The other option is indefinite Israeli rule over Palestinians without granting them citizenship. There’s a word for keeping an ethnically defined part of your population in permanent second-class citizenship: apartheid.

And that is the most fundamental effect of the Trump plan: to grant legitimacy to the move toward apartheid, to give America’s imprimatur to something its government once saw as impermissible.

They are destroying any prospect for a just peace plan in the name of saving it.